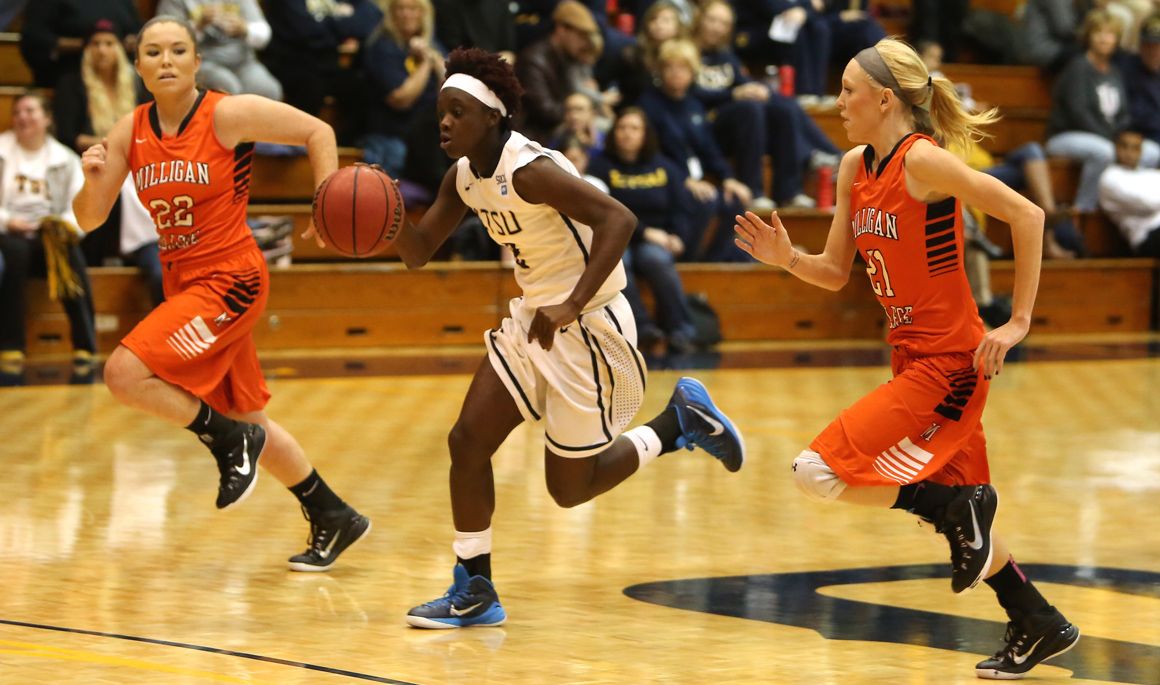 It was back and forth between the Bucs and the Buffaloes in the first five minutes of action as Milligan jumped out to an early 9-4 before Bridges found her stroke nailing back-to-back shots from long distance. Once gaining control of the lead, ETSU never looked back as they embarked on a 13-1 run the final five minutes to take a 23-14 lead after one period.

ETSU blew the lead wide open in the second period as they went on a 29-14 run to end the first half.  Milligan scored six straight points at the end of the second period to create a mini-comeback. However it was Bridges who stopped the Milligan run, draining her fourth three of the half to give ETSU a 44-27 lead into halftime.

The Blue & Gold shot a staggering 60 percent from behind the three-point line while shooting 40 percent from the field in the first half. Bridges led ETSU at the half with 14 points followed by senior Shomari Kendrick (Lexington, Ky.) with eight.

To start the second half the Johnson City, Tenn., native Tarter scored 10 of ETSU’s first 14 points in the third period to extend the Buccaneer lead. Tarter’s scoring display was highlighted by back-to-back three point baskets midway through the period.

ETSU went on to outscore the Buffaloes 22-10 in the fourth period to run away with an 88-56 victory.

Defensively the Bucs maintained a full court press throughout forcing Milligan to commit 20 turnovers, 12 of which came in the first half alone. The Bucs protected the paint as junior Yamile Rodriguez (Santo Domingo, Dominican Republic) had four blocks while freshman Sadasia Tipps (Hickory, N.C.) had three.

On the offensive side of the ball the scoring was equally distributed as Bridges, Tarter, Kendrick, senior Chandler Christopher (Greeneville, Tenn.) and freshman Carley Lytton (Floyd, Va.) each had double digit points. Overall, the Blue & Gold shot 45 percent from the field and 50 percent from beyond the three-point line.