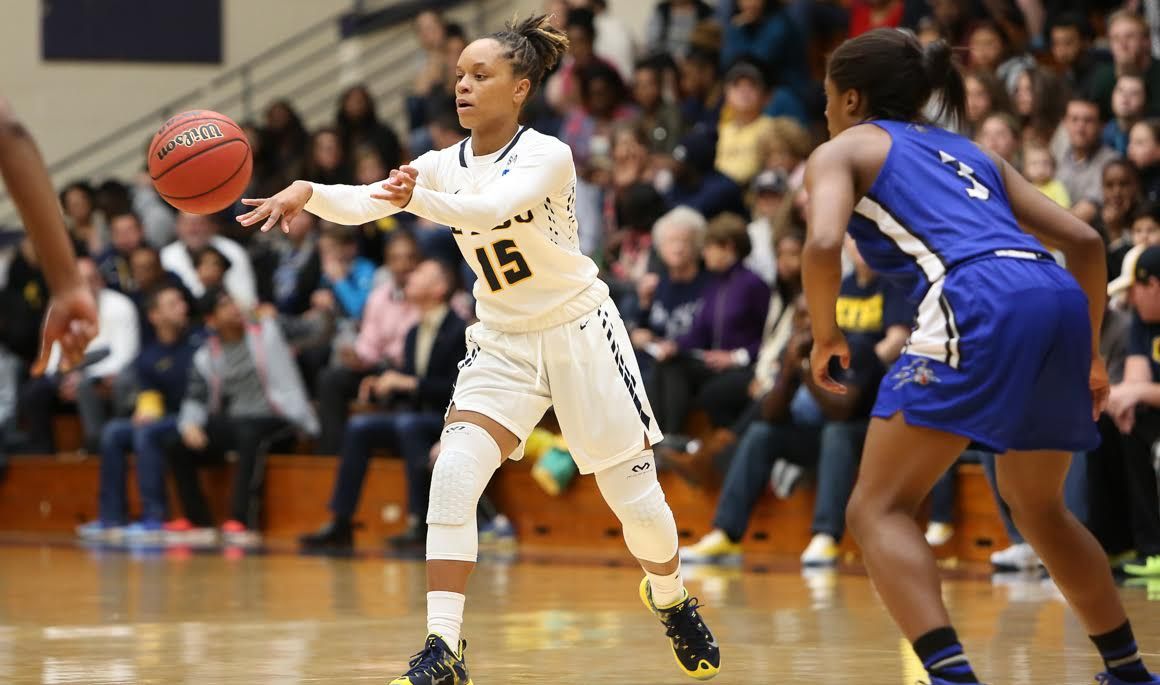 JOHNSON CITY, Tenn. (November 13, 2015) - The ETSU women's basketball team opened up their 2015-16 campaign with a battle against the Bulldogs of UNC Asheville on Friday night inside Brooks Gym. Behind senior Chandler Christopher's 18 point, seven rebound and seven assist performance, ETSU held on for a 74-68 win over UNC Asheville.

ETSU shot 43 percent from the field while playing lockdown defense, holding the Bulldogs to just 34 percent shooting. Before the game, ETSU raised their 2015 banner highlighting their appearance in the Women's National Invitational Tournament (WNIT).

"I felt like we had a great crowd and I thought are energy was good as it was very humbling to see our banner for the first time," said head coach Brittney Ezell. "It was nice to see the crowd and a lot of parents here and it's a testament to our kids and the hard work they are putting in on the court but in the community. People want to be a part of what we are doing here at ETSU women's basketball."

The second quarter featured tenacious defense from the Buccaneers as they forced six turnovers behind a stellar full court press. The defense led to offense as the Blue & Gold went on an 8-0 run in a little over a minute to regain the lead. The run was highlighted by Preseason All-SoCon selection Tianna Tarter (Johnson City, Tenn.) who drilled back-to-back shots from long range. Asheville countered with a 12-1 run the final three minutes of the quarter to close the gap of the Buccaneers. The game was knotted up at the half, 35-35.

Through the first half, ETSU held UNCA to just 34 percent shooting while the Bucs shot 43 percent from the field. Preseason All-SoCon selection Shamauria Bridges (Miramar, Fla.) led the squad in the first half with 10 points to go along with three rebounds. As a team ETSU recorded five blocks in the half, three of which came from junior Yamile Rodriguez (Santo Domingo, Dominican Republic).

Both teams came out firing in the third quarter with each team trading baskets. Bridges picked up where she left off in the first half, scoring the team's first five points including a deep three-point shot to start the quarter. Through the first four minutes of play, there were only three missed shots between both teams.

ETSU regained the lead in the final minute of the third quarter after Christopher drove into the lane, dishing out an assist to Rodriguez. The connection happened once again as the buzzer sounded to end the third quarter to give the Bucs a 53-49 lead heading into the fourth.

It was a wild fourth quarter as the Bucs and Bulldogs battled throughout. UNCA brought the game within one point at the seven minute mark before Christopher nailed a three moments later to give ETSU a four-point advantage. The Bulldogs tied the game with two minutes remaining before the Blue & Gold got hot from the field making four of their next six baskets to extend their lead. Two foul shots by sophomore Mendy McNeese (Greeneville, Tenn.) iced the game at the end giving the Bucs a 74-68 victory.

Four players scored in double-digits for the Bucs with Christopher leading the way with 18 points. Bridges followed right behind with 17 points. Rodriguez had an impressive debut for the Buccaneers pouring in 12 points, six of which came in the fourth quarter along with eight rebounds and five blocks.

The Bucs move to 23-14 since 1979 in home openers and 1-0 on the season for the second consecutive year. ETSU has a quick turnaround as they head to Winstom-Salem, N.C. to take on Atlantic Coast Conference member Wake Forest on Sunday Nov. 15 at 2 p.m.