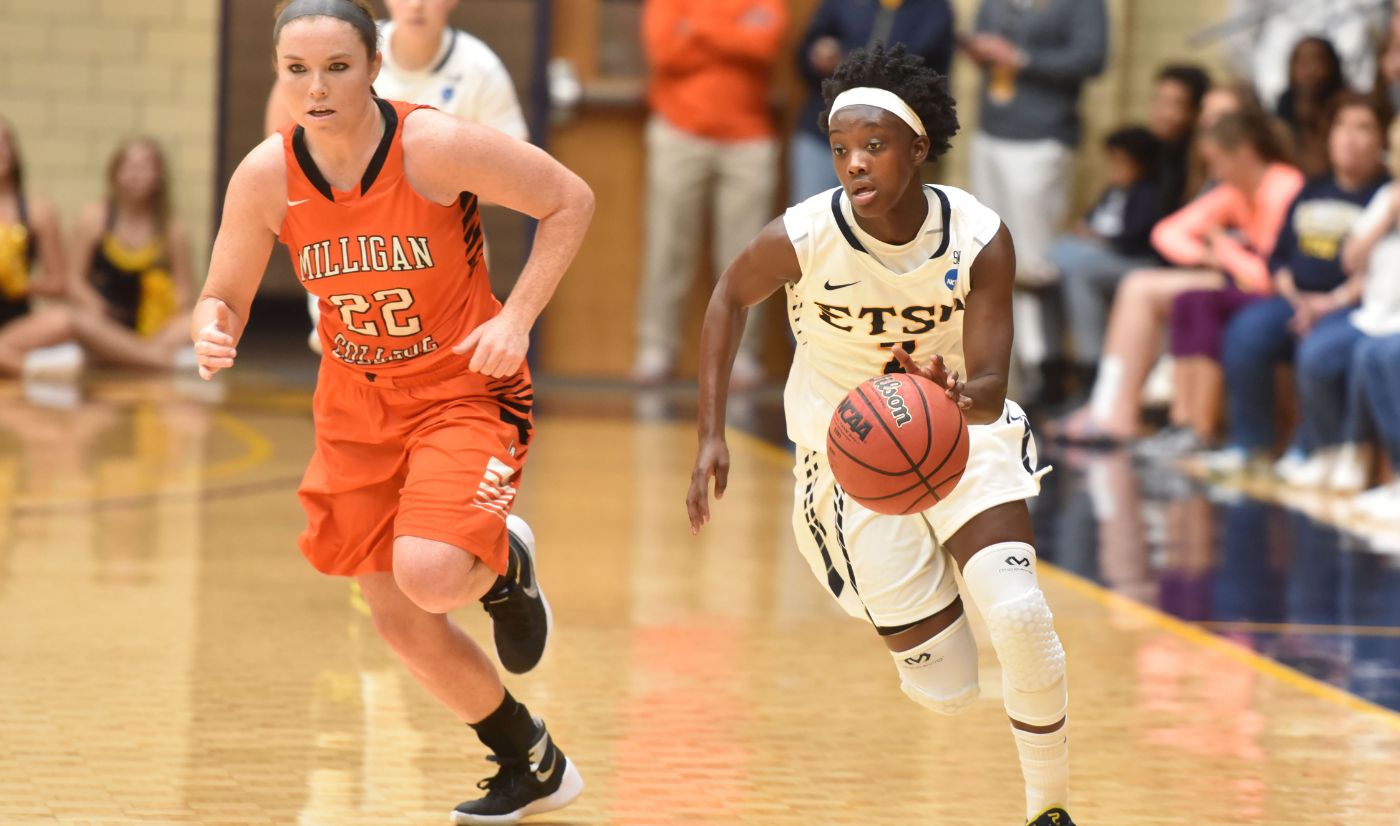 It's the third time during her career Bridges has scored 23 points
Despite 23 points from Bridges, ETSU falls on the road
ETSU at Wake Forest | November 15, 2015
Related Links

WINSTON-SALEM, N.C. (November 15, 2015) - While junior Shamauria Bridges (Miramar, Fla.) tied her career-high with 23 points, the ETSU women's basketball team was unable to complete a comeback despite a second half surge, falling to Wake Forest 69-52 Sunday afternoon.

It's the third time Bridges has scored 23 points, with the last time coming last year against UNC-Greensboro. Bridges had a staggering .500 (4-of-8) shooting percentage from long range and shot 54 percent from the field.

Wake Forest jumped on the Bucs early as they took a 13-3 lead after four minutes of play thanks in large part to ETSU commiting five turnovers. Bridges recorded the first points for the Blue & Gold after taking a hand-off from senior Chandler Christopher (Greeneville, Tenn.) and drilling a deep three point basket.

One of the highlights for the Bucs in the first quarter was sophomore Mendy McNeese (Greeneville, Tenn.) who drove left into the lane, drawing two defenders, finding senior Shomari Kendrick (Lexington, Ky.) all alone for the wide open lay-up midway through the quarter. The Demon Deacons dominated the first quarter forcing the Bucs to commit 10 turnovers which Wake Forest converted into 15 points.

It was a much different Buccaneer team in the second quarter, forcing seven Demon Deacon turnovers while and holding them to just four field goals. Through the first five minutes of the quarter, ETSU held Wake Forest scoreless causing five straight turnovers, the Bucs were unable to capitalize though scoring just eight points in the quarter. However ETSU was agressive offensively as the Deacs commited nine personal fouls

The Demon Deacons held a 39-16 lead at halftime holding the Bucs to just 26 percent from the field. Both teams shot 20 percent from beyond the three-point line while Wake Forest held a significant advantage at the free-throw line shooting 83 percent to ETSU's 50 percent. Bridges led the team at the half with seven points with Christopher and Kendrick producing three points each.

In the third quarter the Bucs were firing on all cylinders shooting 63 percent from the field including four three-pointers. Bridges gained the momentum for ETSU, scoring the Bucs first five points. Freshman Carley Lytton (Floyd, Va.) scored her first collegiate points in dramatic fashion banking a left wing three-pointer off the glass. Lytton had eight points in the quarter.

ETSU got within 12 points as they embarked on a 11-2 run middway through the third quarter but the Demon Deacons countered with a 9-3 run the final two minutes to extend their lead heading into the fourth.

The Bucs cut the Wake Forest lead to 14 in the final quarter before the Demon Deacons pulled away late to record the 69-52 victory, giving ETSU their first loss of the season. Bridges did her best to bring the Blue & Gold back, scoring eight points in the fourth quarter, highlighted by a floater in the paint midway through to give Bridges 23 points, tying a career-high.

Overall, the Bucs shot 35 percent from field along with 38 percent from the three-point line while Wake Forest shot 42 percent. ETSU hurt themselves recording 25 turnovers and the Demon Deacons took advantage scoring 24 points off those turnovers.

ETSU will receive a few days off before heading to Boone, N.C. to take on Appalachian State on Thursday, Nov. 19 at 7:00 p.m. The Bucs next home game is on Saturday, Nov.21 against Brevard College inside Brooks Gym.