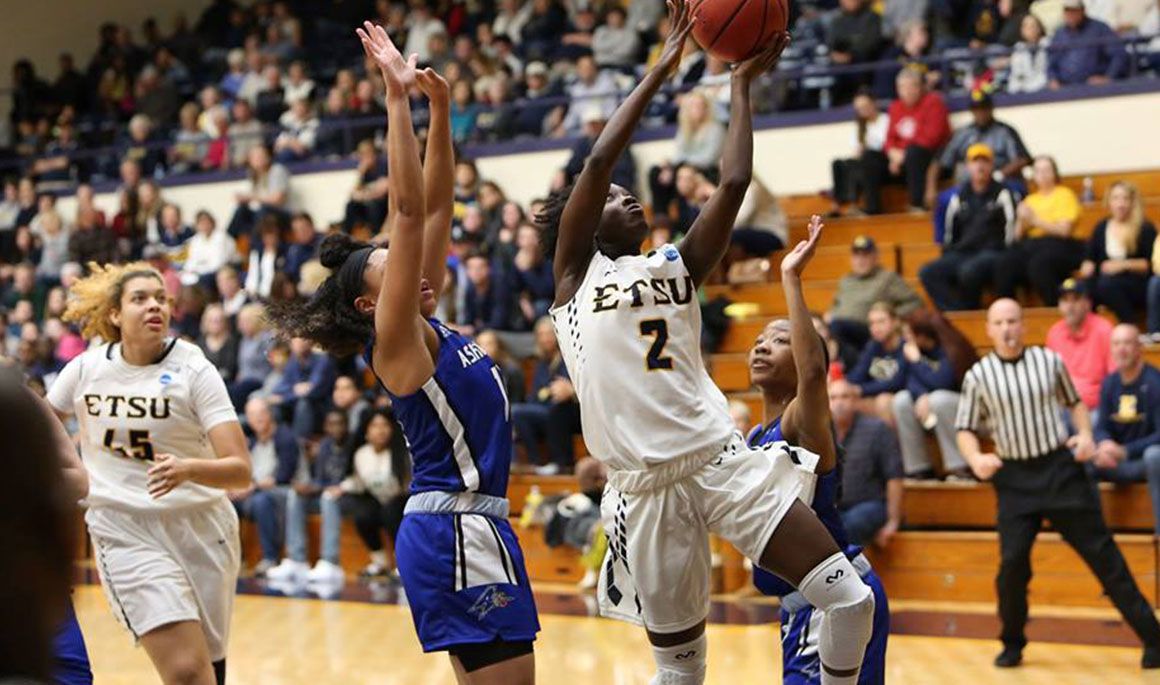 BOONE, N.C. (November 19, 2015) - In a midweek showdown with former Southern Conference rival Appalachian State, the ETSU women's basketball team could not overcome a first half deficit as they fell to the Mountaineers, 70-52 on Thursday night.

"We have got to find a way to be better," said head coach Brittney Ezell. "They are going to learn that you compete at this level every play and you don't get plays off, you don't get rebounds off."

Junior Shamauria Bridges (Miramar, Fla.) accumulated another fine performance for the Buccaneers scoring 22 points on 6-of-21 shooting along with four rebounds. The 21 attempted field goals is the most in a single-game in her career. Bridges has now scored 20+ point in consecutive games, tying her career high in
points with 23 on Sunday against Wake Forest.

Overall the Bucs won the turnover battle, forcing the Mountaineers to commit 22 turnovers, scoring 16 points off those turnovers. App State hit the offensive glass hard outrebounding the Bucs 17-10 and 48-30 for the game. ETSU shot a season low 28 percent from the field and 27 percent from the three-point line.

It was not the ideal first half start for the Bucs as they shot a season low 24 percent from field through the first two quarters. Bridges led the way for the Blue & Gold with seven points with senior Chandler Christopher (Greeneville, Tenn.) was right behind her with five. ETSU commited 13 fouls to App State's 10 in the first half.

Appalachian State took advantage of their size in the paint recording five blocks while scoring 10 points off of 10 Buccaneer turnovers in the half. The Mountaineers shot 48 percent from the field with two players registering double digits points as they took a 38-22 lead into halftime.

The first quarter woes continued for the Bucs this season as they managed to score just 12 points while committing six turnovers in the first 10 minutes of action. After freshman Sadasia Tipps (Hickory, N.C.) grabbed the first point of the game off an offensive rebound, the Mountaineers responded with a 6-0 run in less than a minute. After ETSU tied it up, App State then proceeded to go on a 12-3 run to expand their lead. Bridges looked to jump start the Buccaneer offense as she ended the quarter with a three-point basket to close the gap after the first.

In the second quarter the Blue & Gold didn't fare much better as they were held scoreless the first four minutes which helped App State jump out to as large as an 18-point lead. The Bucs gained momentum towards the end the half, scoring five straight points highlighted by freshman Carley Lytton (Floyd, Va.) who banked in a shot from long distance, the third time she has done so this season.

The Buccaneers were unable to cut into the Mountaineer lead in the fourth scoring just 10 points as the Mountaineers came away with the 70-52 victory. After struggling from the free-throw line in the first half, the Bucs went 10-for-10 from the line in the second half and overall shot 78 percent, the highest mark this season. App State has now won six of their last seven over ETSU.

ETSU returns home Saturday Nov. 21 for a match-up with Brevard College inside Brooks Gym. Tip-off is set for 7:00 p.m. Following the home contest, the Bucs embark on a season-long five game road trip with contests at Old Dominion, Vanderbilt and nationally ranked Tennessee.