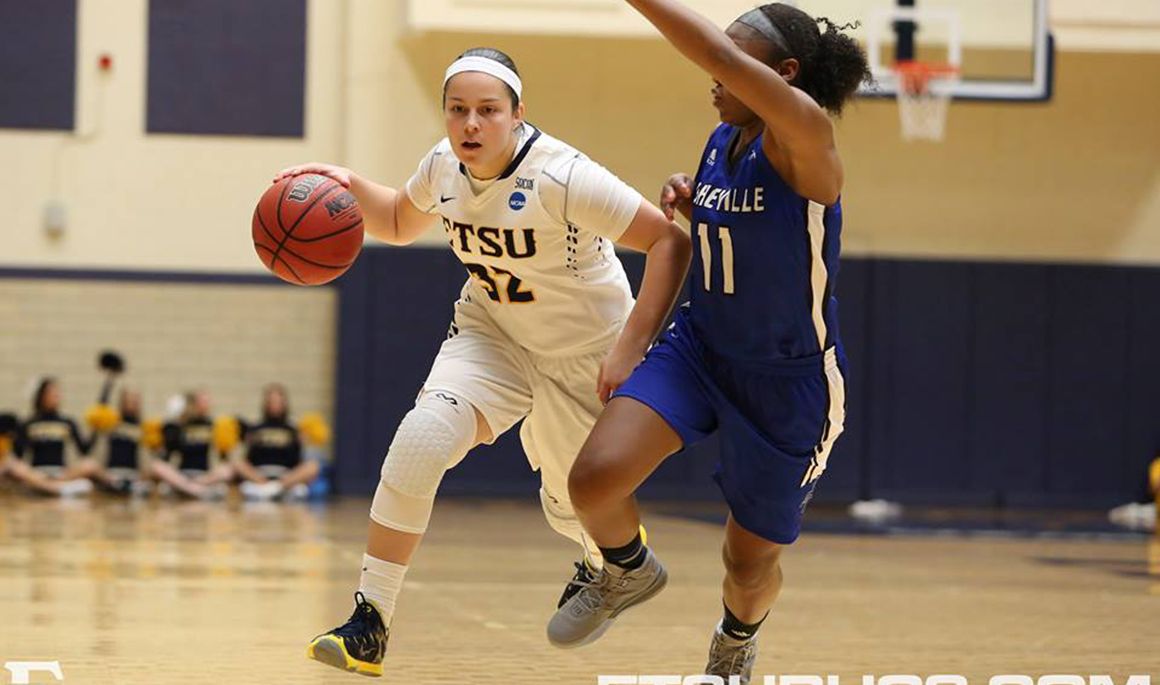 ETSU's comeback was sparked by a 14-2 fourth quarter run

NORFOLK, Va. (November 23, 2015) - The ETSU women's basketball team earned an early season signature win on Monday night as they mounted a comeback in the fourth quarter to defeat Old Dominion 56-52.

"As far as my time at ETSU, this ones ranks right up there," said head coach Brittney Ezell. "It is really rewarding when you have a group of kids that give you everything they got on a daily basis. They love the name across their jersey and this will be a big time signature win for our program."

Trailing 42-36 heading into the fourth quarter the Buccaneers embarked on a 14-2 run to complete the comeback victory recording their second straight win. Midway through the quarter, the Bucs held the Monarchs scoreless for six straight minutes which helped spark the comeback.

After trading baskets to start the fourth, ETSU got the comeback train rolling scoring six straight points in the paint. The Bucs regained the lead with three minutes remaining when junior Shamauria Bridges (Miramar, Fla.) knocked down an uncontested three from the left corner. The next possession, Bridges nailed another three from the left wing to extend the ETSU lead.

Old Dominion hit a three with 16 seconds left to close the gap but clutch free-throw shooting by sophomore Malloree Schurr (Montgomery, Texas) and senior Chandler Christopher (Greeneville, Tenn.) who went a combined 3-for-4 in the final seconds, helped ETSU secure the victory.

"I thought we got a few stops in a row and the kids bought in that we can win this and we don't have to be up here just to compete," said head coach Brittney Ezell. "The kids deserve all the credit, they brought the energy with the right level of engagement and attitude was wonderful tonight."

It was one of the best first quarters of the season for the Bucs as they came out firing on all cylinders scoring 11 points. After trailing 5-4 through the first four minutes, the Bucs caught fire going on a 7-0 run in just two minutes to regain the lead as they forced Old Dominion into three turnovers during the run. However the final five minutes of action saw the Monarchs claw their way back to take the lead as the Bucs missed six of their final seven shots.

The second quarter saw both teams go back and forth to gain the lead and momentum. ODU jumped out to an 18-13 lead in the third quarter before missing four of their next five shots. The Monarch cold streak helped the Bucs move their way back to within one point of the lead with five minutes left in the half.

ETSU trailed 28-23 at halftime despite scoring five points off of seven Monarch turnovers. The Bucs shot 37 percent from the field in the first half with Bridges led the way with nine points. The Blue & Gold recorded 18 rebounds in the half as junior Yamile Rodriguez (Santo Domingo, Dominican Republic) had six to lead ETSU.

For the first time this season the Bucs were outscored in the third quarter but cut into the Old Dominion lead thanks in large part to McNeese who scored five points in the quarter. ETSU tied the game middway through the third after going on a 7-2 run. The Monarchs countered once again with a 12-2 run to take a 42-36 lead into the fourth. The third quarter has been kind the Buccaneers this season as they have outscored their opponents 96-76.