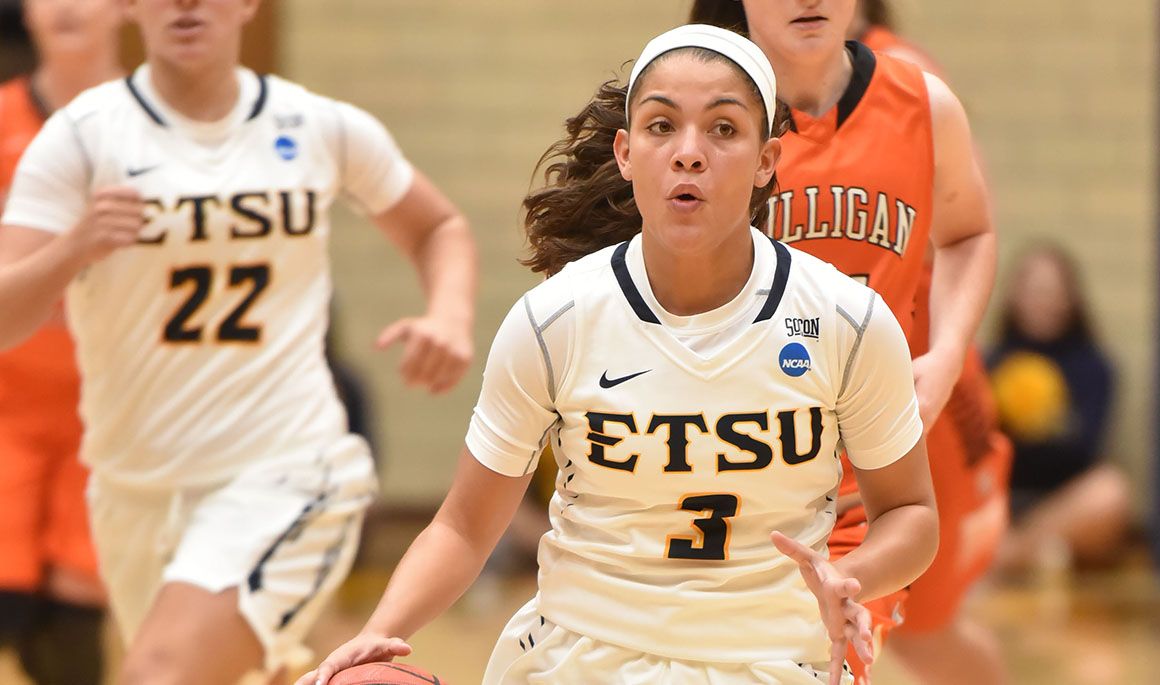 The loss snaps a two-game win streak for ETSU

With the game tied heading into the fourth quarter, the Buc offense went cold as the Colonels outscored ETSU 30-7 in the final quarter to pull away for the victory. Eastern Kentucky embarked on a 15-0 run midway through the fourth, highlighted by three straight baskets from beyond the three point line to put the game out of reach for the Bucs.

Junior Adriane Vaughan (Midlothian, Va.) provided a spark off the bench for ETSU leading the team with a career-high nine points to go along with three rebounds and one steal. The freshman duo of Carley Lytton (Floyd, Va.) and Sadasia Tipps (Hickory, N.C.) combined for 14 points and 14 rebounds with senior Chandler Christopher (Greeneville, Tenn.) contributing with eight assists.

For the third straight game the Buccaneers dominated on the offensive glass hauling in 19 offensive rebounds to EKU's 10. Tipps led the Bucs with five offensive rebounds while senior Shomari Kendrick (Lexington, Ky.) had four. It was a tough shooting night for ETSU going 14-of-57 (24.6%) from the field. From the three-point line the Bucs shots a season-low 12.5 percent. The Bucs forced the Colonels to commit 27 fouls but were unable to capitalize going 10-for-32 from the free-throw line.

The bright spot for the Bucs was once again the third quarter where they outscored Eastern Kentucky 21-14.Trailing at halftime, ETSU came out firing resulting in nine straight points to tie the game up at 20-20. The Blue & Gold took the lead midway through the third when Christopher got fouled in the lane but made the lay-up to give ETSU their first lead of the game.

Eventually the Bucs held a six point lead in the third before EKU countered with a 9-0 run to go back ahead. In the final seconds of the quarter, Vaughan knocked down a three from the left corner to tie the game heading into the final quarter. Lytton scored all seven of her points in the third as ETSU has now outscored their opponents 117-90 this season in the third.

From that point on it was all Eastern Kentucky as the Colonels outscored the Bucs 30-7 in the final 10 minutes of play to hand the Bucs their third loss of the season.

In the first half the Bucs compiled just 13 points, their lowest scoring output in a half this season. ETSU shot 11.5 percent from the field while being 0-of-12 from beyond the three-point line. The Bucs forced EKU to commit 16 fouls in the first half, but couldn't capitalize at the free throw line going 7-of-21. In the second quarter the Bucs scored just six points, the lowest point total in a quarter this season.

ETSU will have a quick turnaround as they travel to Elon, N.C. to take on the Phoenix of Elon on Sunday Nov. 29. Tip-off is set for 2 p.m.

ETSU fans wanting to receive Buccaneer news, score updates, in-game promotions and much more sent to their mobile device can do so by signing up for "Buc Updates."