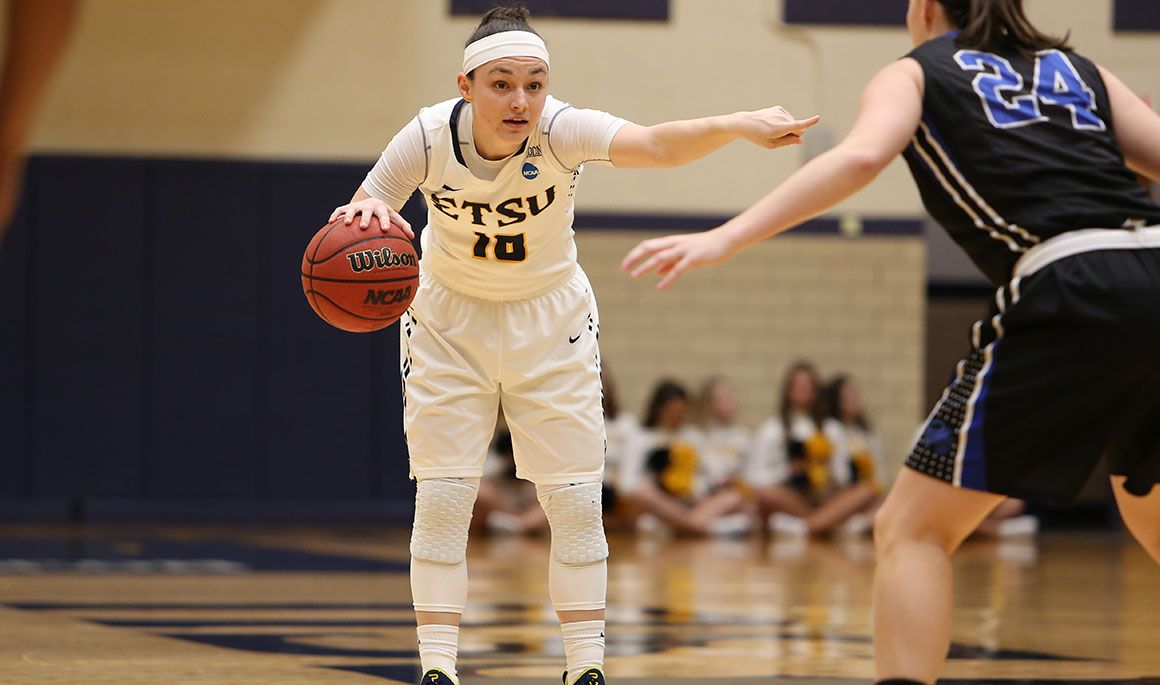 NASHVILLE, Tenn. (Dec. 5, 2015) – The ETSU women's basketball team was unable to overcome a second half surge by Vanderbilt falling 65-39 inside Memorial Gymnasium on Saturday afternoon.

In the first quarter it was the Bridges show as the Miramar, Fla. native scored all 11 points for ETSU. Neither team was able to get the ball in the hoop consistently in the first quarter going a combined 8-of-24 from the field. Vanderbilt held a small lead after the first 10 minutes of action.

The Buccaneers took the lead in the beginning stages of the second quarter as Christopher hit a running floater that tied the game up at 13-13. Sophomore Malloree Schurr (Montgomery, Texas) gave the Bucs a 15-13 lead after she cruised past her defender and drilled a shot from the free-throw line. ETSU has now led in seven of the nine games this season. From that point on however it was all Vanderbilt as they held ETSU scoreless for the final seven minutes, embarking on 12-0 run to end the quarter. The Commodores took a 25-15 lead into halftime.

ETSU commited 13 turnovers in the first half with the Commodores scoring 12 points off the Bucs mistakes. The Blue & Gold scored just four points in the second quarter, tied for the lowest total in a quarter this season.

After being held scoreless for the first two minutes of the quarter ETSU got within single digits of Vanderbilt in the third in large part to a 5-0 run. It all started with freshman Carley Lytton (Floyd, Va.) knocking down her 13th three-pointer of the season from the right wing. Junior Yamile Rodriguez (Santo Domingo, Dominican Republic) followed that up with a bucket in the paint to cut Vanderbilt's lead to 29-20.

The Commodores answered back with nine straight points to extend their lead. ETSU struck again with an 8-0 run fueled by three pointers and turnovers. On back-to-back possessions Bridges and Lytton knocked down three's from the right wing. ETSU then forced a turnover which led to a fast break lay-up for junior Adriane Vaughan (Midlothian, Va.) to chip into the Vanderbilt lead heading into the fourth.

In the second half Vanderbilt was 16-of-26 from the field and shot 46.9 percent for the game. The Buccaneers shot 34.1 percent overall and 36 percent from behind the three point line. ETSU commited 22 turnovers on the afternoon with the Commodores scoring 16 points off those turnovers.

The Bucs next game will be at home inside Brooks Gym on Sunday, Dec.13 as they look to snap their four-game skid against Armstrong State. Tip-off is set for 2 p.m.