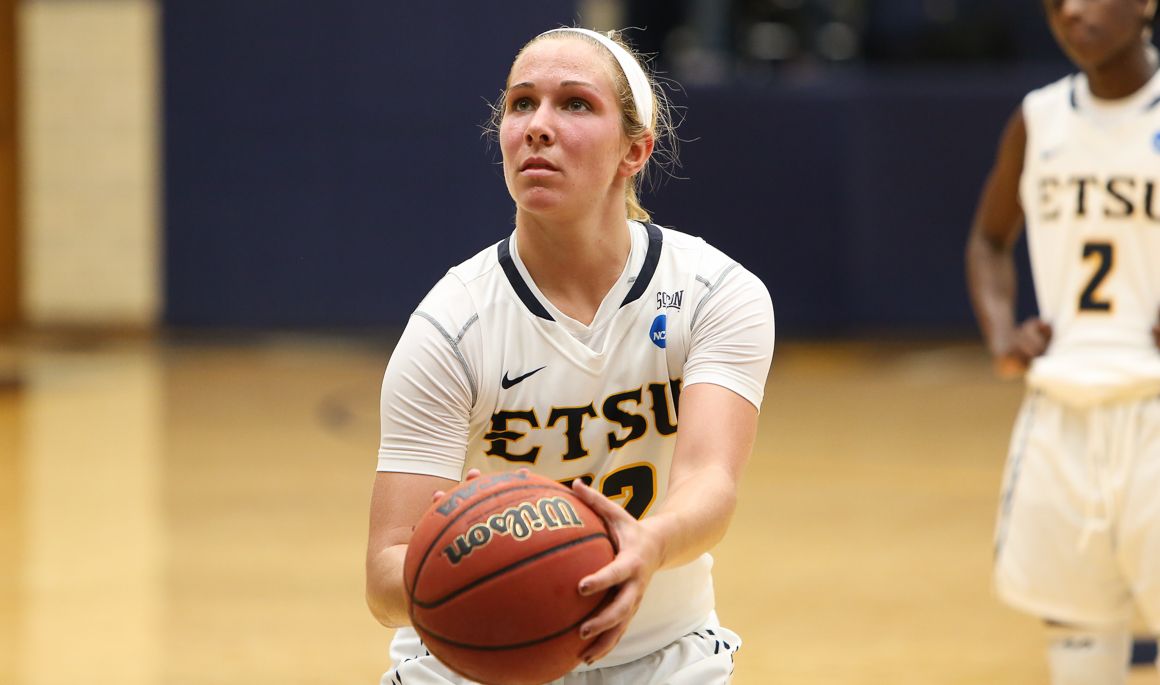 The Bucs registered 27 offensive rebounds which led to 22 second chance points en route to the home victory. ETSU also collected a season-high 14 steals as the Buccaneers forced the Pirates to commit 24 turnovers.

“I was pleased to be able to beat a solid opponent today and grateful that they were willing to come up and play us,” said head coach Brittney Ezell. “Today was a good challenge for us.”

“She (Tarter) makes everyone around her better and that is the mark of a great player and a great leader,” said Ezell. “Just her presence alone was wonderful.”

Bridges helped the Bucs jump out to an early lead in the first quarter, scoring the team’s first six points. The offensive pace slowed down midway through as neither team was able to get the ball in the hoop going a combined 2-of-12 from the field.

Leading after the first, ETSU hit the offensive glass hard in the second quarter registering 10 offensive rebounds. In the quarter alone, ETSU outrebounded Armstrong State, 17-4. The Pirates were within single digits midway through the second quarter in large part to a 6-0 run as ETSU went 1-of-7 from the field during that time.

However, the Bucs responded quickly by ramping up the defensive pressure leading to three straight Armstrong State turnovers. ETSU capitalized on the Pirates mistakes draining three straight field goals to end the half with a 35-19 lead, the biggest halftime lead for ETSU this season.

In the third quarter, the Bucs jumped out to their largest lead of the day at 21 before the hot shooting cooled off midway through the quarter. ETSU went on a five minute scoring drought to end the third but Armstrong State couldn’t close the gap going just 1-for-6 during the scoring drought.

Armstrong State quickly ran out of the gate in the fourth, going on a 6-0 run to bring the lead to 13 with eight minutes to go. Once again, ETSU picked up the defensive pressure forcing the Pirates to commit three straight turnovers. Cold shooting continued for the Blue & Gold in the fourth shooting just 26 percent from the field in the quarter. Despite going on three minute scoring drought to end the game, Armstrong State was unable to seize the opportunity falling to the Buccaneers, 62-52.

“It is nice to be at home and be in front of our crowd, we really appreciate everybody that came to the game today,” said Ezell.

With the victory ETSU snapped a four-game losing streak and is now 4-6 on the year.  Sophomore Malloree Schurr (Montgomery, Texas) led the Bucs with seven rebounds, six of which were offensive. Guard Shermika Harris of Armstrong State led all players with 18 points.

“Her (Schurr) energy is so contagious and fun to watch,” said Ezell. “Malloree optimizes what a teammate should be.”

The Bucs are back in action inside Brooks Gym on Wednesday, Dec. 16 at 7 p.m. when they take on the Fighting Camels of Campbell.