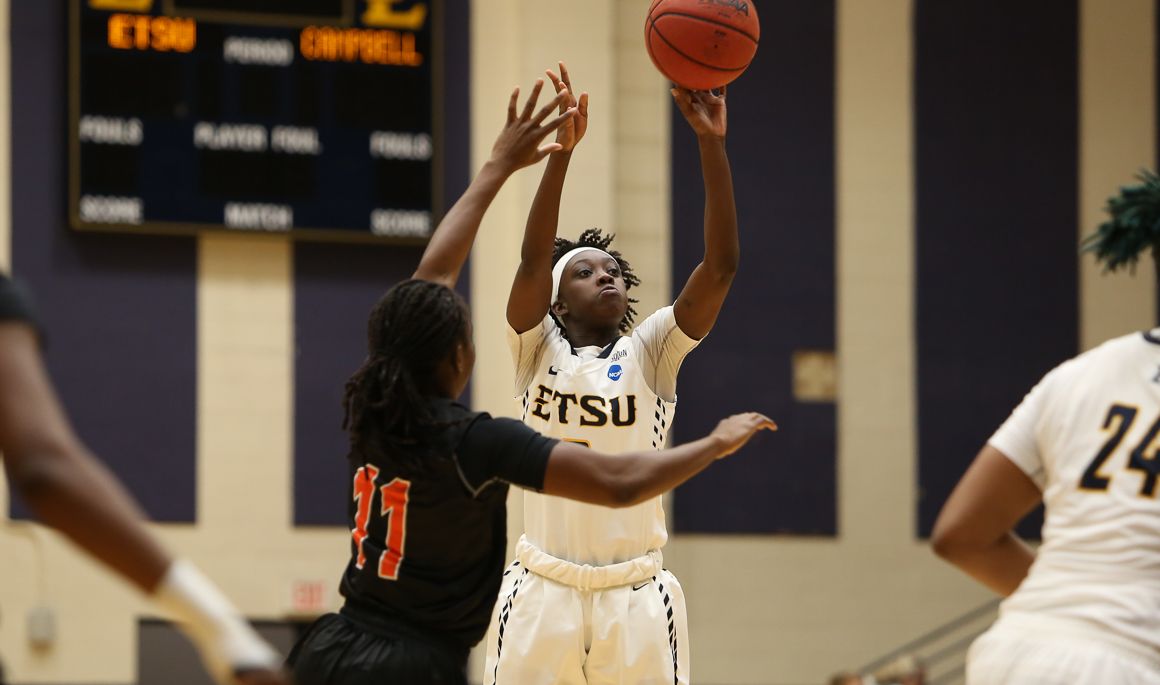 JOHNSON CITY, Tenn. (December 16, 2015) – At one point the ETSU women's basketball team led by as many as 28 points as they rolled past Campbell 70-55 Wednesday night inside Brooks Gym. It's the first time since 2009 the Bucs have started 4-0 at home.

"I think it is important to protect home court, we want this to be a difficult place to play," said head coach Brittney Ezell. "We want our fans to be apart of it, we have had great fans in our non-conference games as they feel engaged, they buy into this team and that is what we want."

As a team, the Buccaneers shot 43.4 percent from the field as the trio of senior Chandler Christopher (Greeneville, Tenn.), junior Shamauria Bridges (Miramar, Fla.) and sophomore Tianna Tarter (Johnson City, Tenn.) each scored in double-digits with Bridges leading the way with 25.

The Blue & Gold had their best game of the season from the free-throw line shooting 89.5 percent (17-of-19). ETSU forced Campbell into 14 turnovers, scoring 20 points off of the Lady Camels mistakes. For the second straight game the Bucs recorded 15 or more offensive rebounds, collecting 17 on the offensive glass. Freshman Sadasia Tipps (Hickory, N.C.) registered a career-high 11 rebounds.

"Campbell is going to have a really good season in the Big South and I like Wanda Watkins she does a great job," said Ezell. "Overall, I was extremely pleased with our effort tonight."

It was a scorching start for Bridges who recorded 12 of her game-high 25 points in the first quarter. A three pointer from the top of the key from Bridges to start the game, sparked a 15-4 run for ETSU, jumping out to a 23-8 lead after 10 minutes of play. In the quarter alone, the Bucs shot 61 percent from the field.

In the second quarter, the hot shooting seemed to cool off as Campbell brought the game to within single digits thanks to an 8-0 run. During the Lady Camel run the Bucs were 0-for-4 from the field and scoreless for nearly four minutes. Campbell couldn't keep the Buc offense down for long as ETSU ended with a 6-0 run to take a 40-25 lead into halftime.

The 40 points for ETSU was the most points in a half this season.

Coming out of halftime, the Bucs continued their hot shooting from the first half by successfully completing two straight and-one's along with a deep three by Bridges giving ETSU their largest lead of the game at 28. The quarter was highlighted by a 13-4 run for the Blue & Gold while holding the Lady Camels scorless for nearly five minutes.

Campbell looked to make a comeback effort in the fourth quarter, outscoring the Bucs 15-7 but it wasn't enough as ETSU secured their second straight victory. ETSU moves to 5-6 on the season and is now 4-0 inside Brooks Gym for the first time since the 2009-10 season.

ETSU will have a quick turnaround as they hit the road to take on Davidson on Friday, Dec 18 at 11:30 am. The Blue & Gold return home on Dec. 21 at 7 p.m., matching up against Austin Peay.