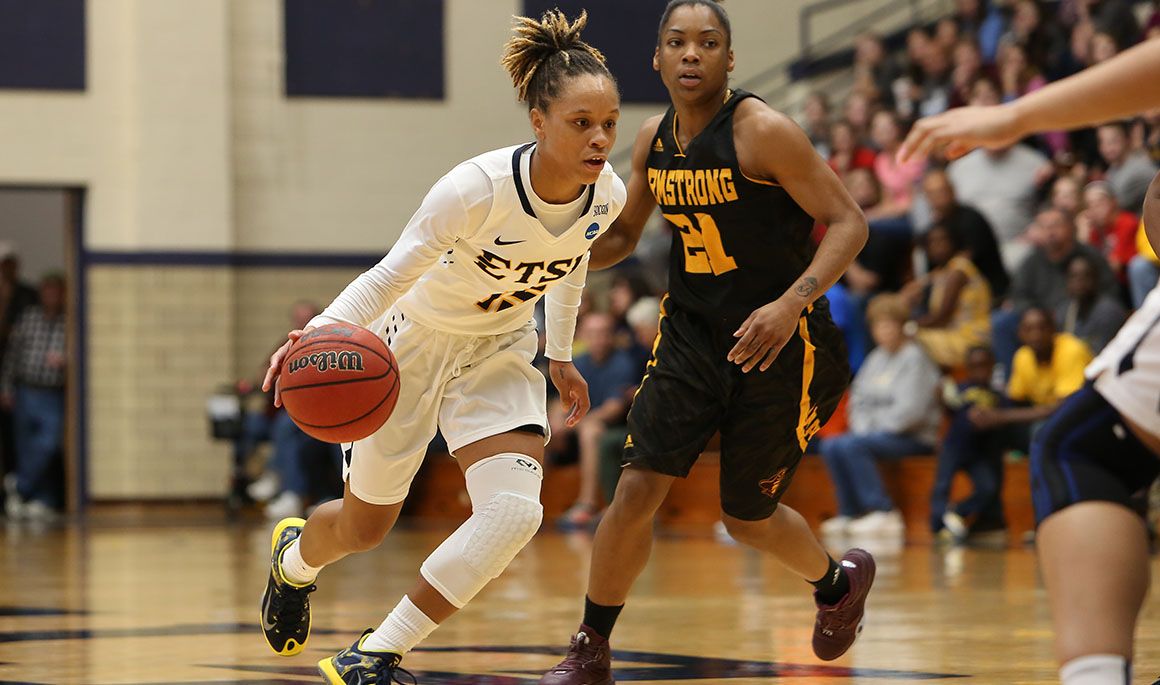 DAVIDSON, N.C. (December 18, 2015) – On Friday morning the ETSU women's basketball team defeated Davidson, 65-58 for their first victory over the Wildcats since 2004. The Bucs were led by sophomore Tianna Tarter (Johnson City, Tenn.) who recorded a double-double.

In her third game back from injury, Tarter played all 40 minutes registering a game-high 26 points which tied a career-high to go along with 11 rebounds. When it mattered most in the fourth quarter the Johnson City, Tenn. native took over scoring 13 of ETSU's 26 points in the quarter. Tarter is the first ETSU player since Destiny Mitchel back on Feb. 6, 2015 to lead the team in points, rebounds and steals.

The Buccaneers scored the most points in a quarter this season in the fourth scoring 16 points to hold off the Wildcats in the final 10 minutes of action. Heading into the quarter ETSU held a 39-35 lead before Davidson embarked on an 8-0 run to regain the lead with five minutes left.

ETSU countered with a 5-0 run highlighted by junior Shamauria Bridges (Miramar, Fla.) nailing a deep three from the right wing to give the Bucs the lead again. Once the Bucs controlled the lead, they didn't look back as they knocked down two straight three's, one from Bridges straight on and one from senior Chandler Christopher (Greeneville, Tenn.) in the left corner.

In the final seconds, it was Tarter coming up clutch for the Bucs knocking down two free-throws with 30 seconds left to make it a five point game. Then on the next possession for Davidson, Tarter came up with the steal that ultimately sealed the game and gave ETSU their third straight victory.

Cold shooting dictated the first half as the Blue & Gold went 9-of-27 from the field and 3-for-11 from behind the three-point line. However, ETSU was able to take a 25-22 lead into halftime. The trio of Bridges, Christopher and Tarter combined for 21 of ETSU's 25 points.

The third quarter didn't start off well for the Bucs as the Wildcats scored five straight points to take the lead. Tarter ended Davidson's 5-0 run with a fast break lay-up to tie the game back up at 27-27. Once tied, Bridges took over the game sparking a 9-2 run for ETSU highlighted by a three from the right wing and a fast break euro-step lay-up. The Bucs ended the quarter by scoring six points off of three straight fast breaks.

In the second half, the Blue & Gold went 7-of-16 from three and shot 90 percent from the free-throw line. ETSU's 40 points in the second half is tied for the most points in a half this season. ETSU recorded 40 rebounds in the morning contest with sophmore Malloree Schurr (Montgomery, Texas) collecting a career-high 11 boards.

ETSU will look for their fourth consecutive victory when they square-off against Austin Peay inside Brooks Gym on Monday, Dec. 21 at 7 p.m.