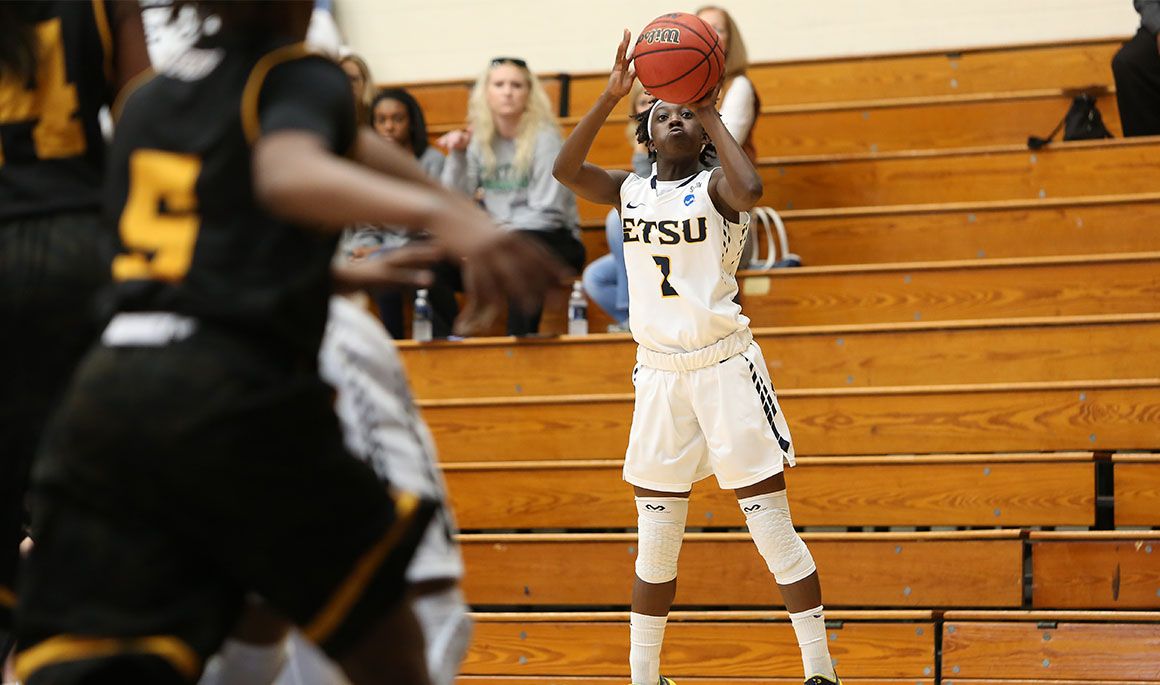 ETSU is now 5-0 inside Brooks Gym this season

JOHNSON CITY, Tenn (December 21, 2015) – The final home game of 2015 for the ETSU Women's Basketball team was a dramatic one as junior Shamauria Bridges (Miramar, Fla.) nailed a deep three-pointer with 30 seconds left, propelling the Buccaneers to a 80-76 victory over Austin Peay on Monday night.

"We called her number, I told her (Bridges) I was coming back to her and she pulled it and it was pretty," said head coach Brittney Ezell. "I don't doubt my shooters, shooters shoot that is what they do but I was really proud for her and happy for her."

For the second straight game the Buccaneers scored 25 or more points in the fourth quarter, outscoring the Lady Govs, 29-20 in the fourth. After trailing for most of the second half, the Bucs regained the lead with five minutes remaining thanks to sophomore Tianna Tarter (Johnson City, Tenn.) knocking down two clutch free-throws.

The two free-throws by Tarter was apart of a 12-2 run by ETSU that saw the Blue & Gold lead by as many as four at one point. Senior Chandler Christopher (Greeneville, Tenn.) registered a big momentum shift during the run, draining a three from right corner after an assist by Tarter to give ETSU a 66-62 lead. After Austin Peay went scoreless for nearly four minutes, the Lady Govs clawed their way back and tied the game up with three minutes remaining .

Back and forth the final three minutes of action saw Austin Peay ahead on the scoreboard with 30 seconds left. That's when Bridges took over grabbing the ball on the left wing, shooting a deep three-pointer that hit nothing but the bottom of the net to give ETSU a two-point lead with 10 seconds left. On the next possesion, Austin Peay missed a potential game tying jumper as Tarter grabbed the rebound and sealed the game with two clutch free throws.

"What a fun game to watch, I thought we had some kids step up and make plays in timely moments," said Ezell.

In the first quarter, Austin Peay jumped out to a quick 5-0 lead before the Bucs got on the board with a lay-up from freshman Sadasia Tipps (Hickory, N.C.). Although the cold shooting from ETSU they only trailed 11-9 midway through the quarter. The Bucs then embarked on a 16-4 the final five minutes to take a 22-13 lead after the first 10 minutes.

"Tiannais the most competitive person in the gym and puts everybody around her at ease," said Ezell. "She refuses to lose, she wills us to win and has done it since the moment she has stepped on campus."

Overall, the Bucs recorded 36 points in the paint to go along with 46.8 percent shooting from the field. ETSU also shot 46 percent from the three-point line with Christopher and freshman Carley Lytton (Floyd, Va.) going 2-of-4 from three. Austin Peay's Tiasha Gray led all scorers with 27 points.

With the victory ETSU extended their winning streak to four, the third longest win streak under coach Ezell. The Bucs also improved to 5-0 at home, the best start at home since the 2009-10 season.

The Bucs will have a couple days off for Christmas before reconvening for a trip to New York on Dec. 29 to take on the Gaels of Iona. ETSU closes out there non-conference schedule on Jan.3 against Lees-McRae at 2 p.m. inside Brooks Gym.