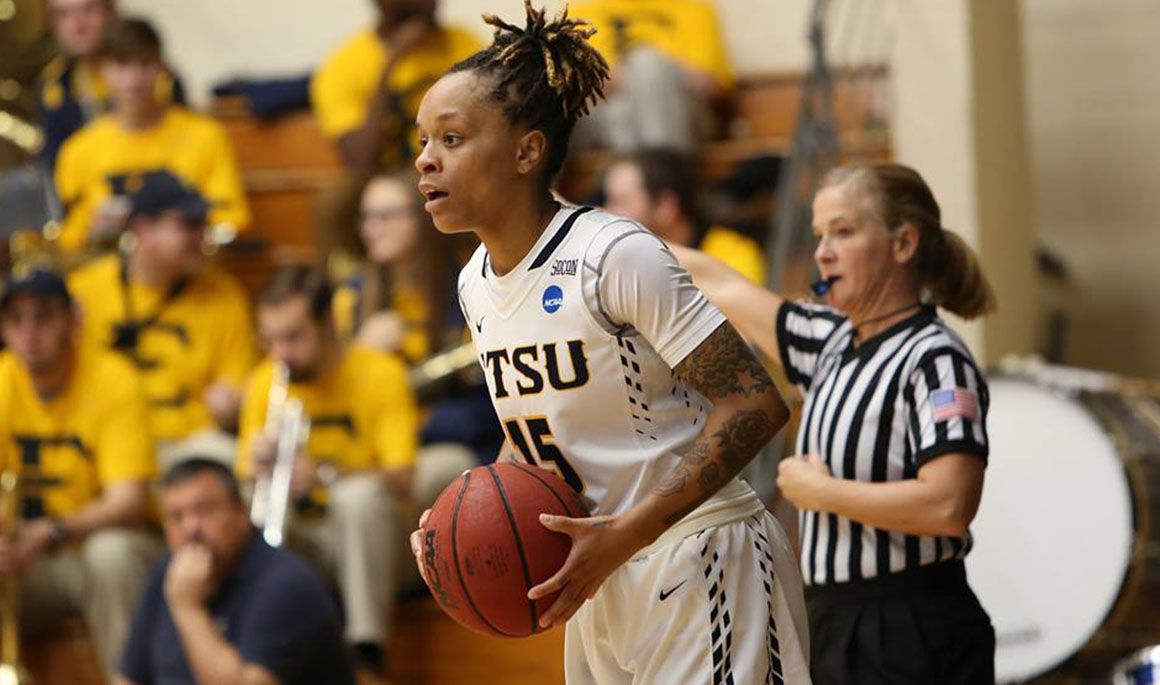 MACON, Ga. (January 23, 2016) - With 12 seconds remaining and the Buccaneers down by one, the ball was put into the hands of sophomore Tianna Tarter (Johnson City, Tenn.) and she delivered with a game-winning lay-up to give the ETSU Women's Basketball team a 55-53 victory over Mercer on Saturday afternoon.

Down by nine heading into the fourth quarter, Tarter propelled the Bucs back by scoring 11 of her game-high 21 points in the fourth. The native of Johnson City, Tenn., recorded 21 points along with 10 rebounds for her second double-double of the season.

With one minute left it was the heroics of Tarter propelling through as she cruised past the Mercer defense for the fast break lay-up to trim the Mercer lead to just one. In the remaining seconds the Bucs forced a Mercer turnover which set up Tarter for the game-winning lay-up, securing ETSU's fourth straight victory over Mercer.

To start the game ETSU was firing on all cylinders against the Bears jumping out to a 12-2 lead thanks to Christopher's two three-pointers from the left corner. The Buc defense forced Mercer to miss their first six field goal attempts.

The momentum shifted in the second quarter as ETSU was outscored 19-6 going just 2-of-10 from the field. On the other side, Mercer found their shot going 7-of-18 from the field and shooting 57 percent from the three-point line. At the half ETSU trailed 29-24, the first time the Bucs have trailed at the half in four games.

In the third quarter the Bucs and the Bears traded baskets as Mercer was able to jump out to a double-digit lead with two minutes remaining in the third. In the third ETSU shot 50 percent from the free-throw line as the Bucs went to the line 12 times.

With the victory ETSU handed Mercer their first loss in Southern Conference play while the Bucs improved their record in SoCon play to 4-2. Off the bench, senior Shomari Kendrick (Lexington, Ky.) had a game-high 12 rebounds to go along with eight points.

As a team, ETSU shot 36.5 percent from the field and 21.1 percent from the three-point line. The Bucs outrebounded the Bears,44-33 and punished Mercer on the offensive glass, 15-11. The Blue & Gold recorded 24 points in the paint and took advantage of their offensive rebounds with 11 second chance points.

The Blue & Gold head home for their next contest against rival Chattanooga on Jan.30 at 2:00 p.m. The game will be streamed live on ESPN3. ETSU is 8-0 inside Brooks Gym this season.