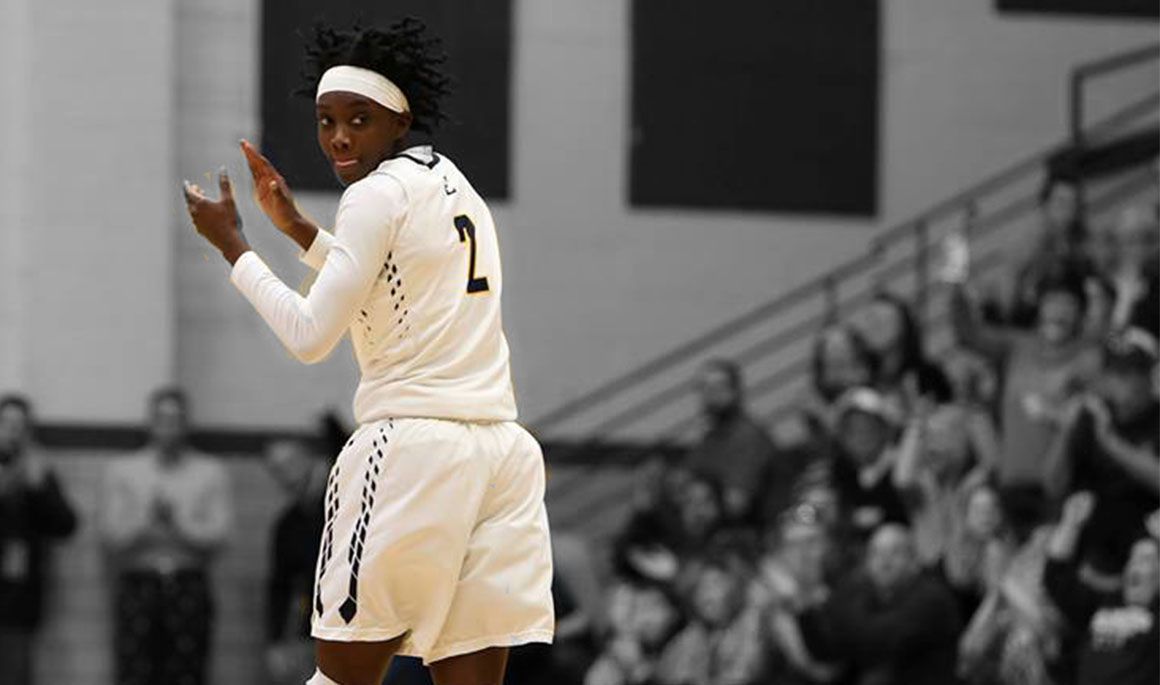 JOHNSON CITY, Tenn. (February 4, 2016) - At the 5:51 mark of the third quarter junior Shamauria Bridges (Miramar, Fla.) nailed a three-pointer from the right corner to become the 22nd member of ETSU's 1,000-point club as the ETSU Women's Basketball team escaped with a 70-69 victory over Wofford on Thursday morning.
In front of 1,814 kids of local elementary schools kids as part of Education Day Bridges became just the fourth Buccaneer in program history to reach the 1,000-point plateau in three seasons, recording 12 points along with five rebounds in the victory. Senior Chandler Christopher (Greeneville, Tenn.) led all scorers with a game-high 17 points.
"I'm thrilled with the turnout of all the little kids and that we were able to show a little bit of toughness," said head coach Brittney Ezell.
The 11:00 a.m. tip-off didn't seem to bother neither team in the first quarter as the Bucs and Terriers battled to control the lead in the quarter. ETSU held Wofford scoreless for nearly three minutes midway through the quarter to take a two-point after the first.
Sophomore Malloree Schurr (Montgomery, Texas) got off to a fast start for the Bucs with four points and five rebounds in the first 10 minutes of action.
"We did a good job of rebounding," said Ezell. "It's converting on an offensive rebounds and converting the free-throw when you get fouled."
After the Terriers pulled to within one at the eight minute mark of the second quarter, the Bucs found their rhythm offensively scoring five straight points to grab a 22-16 lead midway through. However, the Blue & Gold shot just 2-of-9 the rest of the half while Wofford went on a 7-0 the final two minutes to take a 29-27 lead at halftime.
The Terriers jumped out to their largest lead of the game at eight midway through the third before ETSU embarked on an 8-0 run in just over a minute to tie the game. The highlight of the run was Bridges drilling her second three of the game to join the ETSU elite in the 1,000-point club.
Over the next nine minutes of action the Buccaneers were rolling offensively using a 31-14 run to secure an 11-point lead with eight minutes remaining. Wofford came storming back with a 13-5 in the fourth to cut the ETSU lead to three with 45 seconds remaining.
With 45 seconds left Wofford guard Jordan Frazier shot a left corner three that found the bottom of the net, tying the game at 67-67. It was then freshman Raven Dean (Charlotte, N.C.) who helped ice the game for the Bucs going to the free-throw line the next two possessions making 3-of-4.
Down three with 14 seconds left, Wofford missed a three-pointer from the right wing but it was tipped back in by forward Kentra Washington as time expired as ETSU escaped with a 70-69 victory. The win improves ETSU's overall record to 13-10 and 5-3 in SoCon play. The Bucs also improve to 9-1 inside Brooks Gym this season.
Schurr led all players with 10 rebounds, the third time this season she has recorded double-digit rebounds. As a team ETSU shot 39.1 percent from the field while but outrebounded the Terriers, 42-40. On the offensive glass, the Bucs led 15-9 with 14 second chance points.
"We have a short turnaround to get ready for Furman and we are going to have to be on the glass again, hit free throws and do a good job like we did today of taking care of the ball," said Ezell.
A quick turnaround for the Blue & Gold as they end their season-long three game home stand on Saturday Feb. 6 against Furman at 2:00 p.m. The game can be streamed live on ESPN3.
ETSU fans wanting to receive Buccaneer news, score updates, in-game promotions and much more sent to their mobile device can do so by signing up for “Buc Updates.” Click here to sign up today!
For more information on Buccaneer women’s basketball, visit ETSUBucs.com and click on the women’s basketball page.