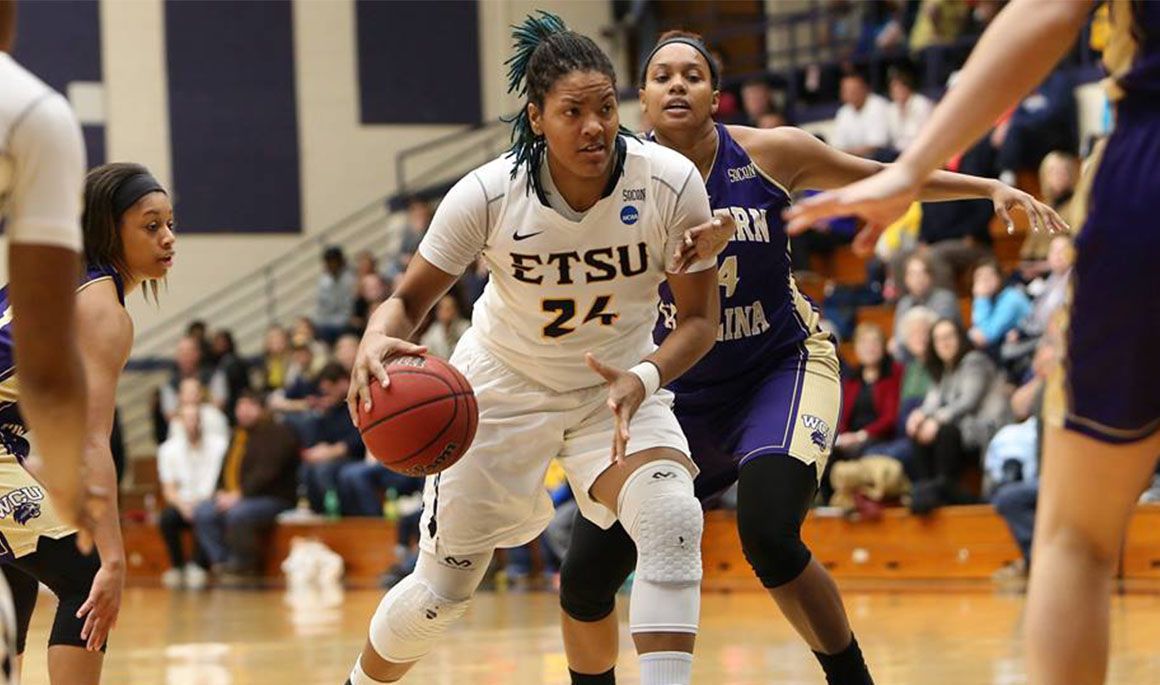 JOHNSON CITY, Tenn. (February 6, 2016) - Senior Shomari Kendrick (Lexington, Ky.) registered her third double-double of the season with 10 points and 11 rebounds as the ETSU Women's Basketball team came away with a 68-64 victory over Furman on Saturday afternoon inside Brooks Gym.
"Anytime we play Furman it is a great match-up and I thought our kids showed some guts today," said head coach Brittney Ezell. "It was a great team effort."
The win gave the Buccaneers their third victory in their last four games while improving their record in SoCon play to 6-3. ETSU saw three players score in double figures with 10 from Kendrick, sophomore Tianna Tarter (Johnson City, Tenn.) with 18 and junior Shamauria Bridges (Miramar, Fla.) leading the Bucs with 19.
"Tianna Tarter was remarkable, her effort on the defensive end to guard Bunn, her effort to run the offense and play at the rim, she was remarkable," said Ezell. "Shamauria Bridges showed off her shooting range today and it was a lot of fun to watch."
ETSU found most of their production from inside the paint scoring 28 points in the paint while outrebounding Furman, 37-34.
Bridges who went 5-of-8 from the three-point line against the Paladins moved into eighth place on ETSU's single-season three-pointers made with 62. The single-season record for most three's in a season is 85 set by Michele DeVault in 2007.
It was a quick start for ETSU as they made three of their first four shots to begin the game. After jumping out to an 7-2 lead, the Paladins stormed right back scoring eight straight points en route to a 10-4 run in the first. The Bucs ended the first on a three minute scoring drought to give Furman a 17-13 lead heading into the second.
In the second quarter the Blue & Gold found the offensive rythm in the post as Kendrick scored four straight points to open up the quarter and  tie the game 17-17. Neither team was able to gain an edge before halftime as Furman went just 1-of-6 the final three minutes while ETSU was held scoreless.
Furman took a 31-29 lead into halftime, the fourth straight game ETSU has trailed going into the half. At the half ETSU scored 12 points off the bench compared to Furman's two with Kendrick leading the way with eight. The post players for ETSU combined fore 16 of the team's 29 points in the first half.
"The post did a really good job in prep yesterday and we felt like after watching tape as many times as they (Furman) switched that we would find some mismatches and we did," said Ezell. "I thought our kids did a really good job of exploiting those mismatches."
While the bench was producing for ETSU in the first half, it was the stars for the Bucs that produced in the second half. One of those stars was Bridges who scored eight straight points to start the third.
ETSU in the third quarter jumped out to a double-digit lead thanks to back-to-back three pointer's by Bridges and Christopher. Coming off a screen from the left side, Bridges knocked down one of her game-high five three-pointer's from the top of the key. Christopher pushed the lead to double-digits for ETSU when she nailed a three-pointer from the left corner. In the third, ETSU outscored Furman 24-13.
"They were free and relaxed and trusted one another and that is what being on a team is all about," said Ezell. "The kids just found a way today."
The Paladins fired back in the fourth after surrendering a three-pointer by Bridges to begin the quarter, they went on to score seven straight points to cut the deficit to one with six minutes to play. Midway through the quarter, neither team could buy a shot as both teams went a combined 3-of-15 from the field.  Despite the cold shooting, ETSU held a 66-62 lead with a minute to play.
In the closing seconds Furman had multiple opportunities to tie the game but was unable to knock down the big shot. With 10 seconds left Furman's Cierra Carter shot a three-pointer that bounced off the rim and landed into the hands of guard Tianna Tarter who clinched the game with two free throws, giving ETSU the 68-64 victory.
With an overall record of 14-10 and SoCon record of 6-3, the Bucs travel the state of North Carolina next weekend to take on Western Carolina on Thursday, Feb. 11 before taking on UNC-Greensboro on Sunday, Feb.13.
ETSU fans wanting to receive Buccaneer news, score updates, in-game promotions and much more sent to their mobile device can do so by signing up for “Buc Updates.” Click here to sign up today!
For more information on Buccaneer women’s basketball, visit ETSUBucs.com and click on the women’s basketball page.