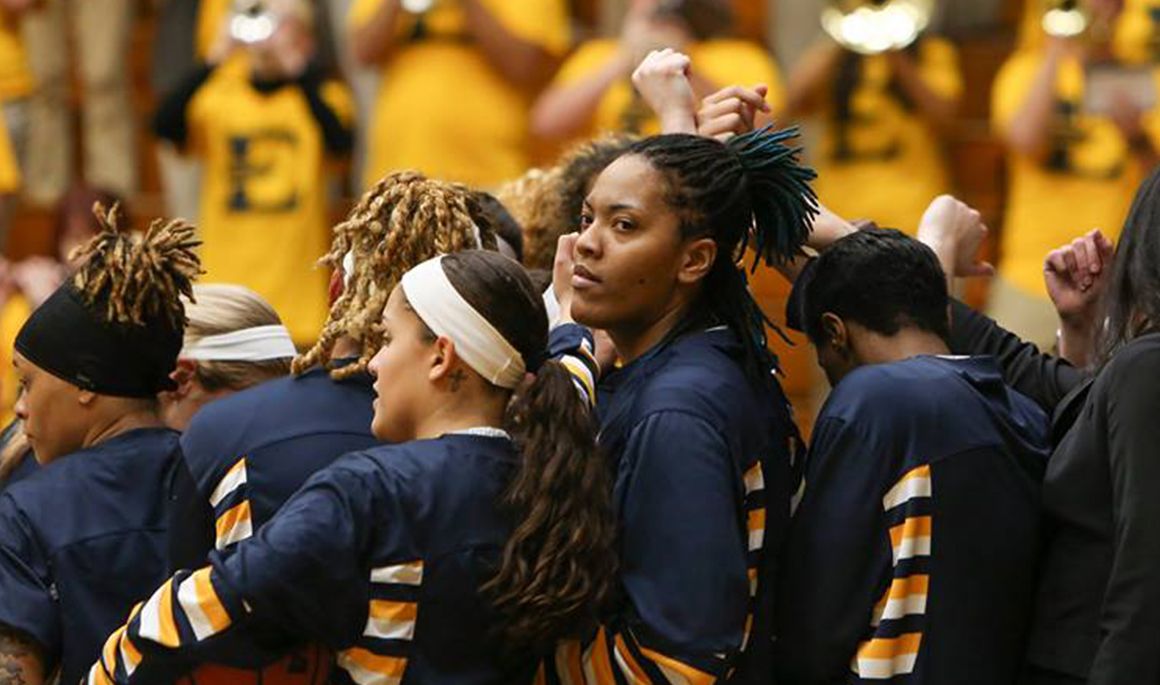 It's ETSU's fifth straight victory over the Catamounts

CULLOWHEE, N.C. (February 11, 2016) - The ETSU Women's Basketball team earned it's 600th program victory on Thursday night as they scored 17 points in the fourth quarter to defeat Western Carolina, 45-43 inside the Ramsey Regional Activity Center.
The Buccaneers are the 147th program in NCAA Women's Basketball history to achieve 600 wins and are one of only six programs from the Southern Confernece to reach the milestone.
With 16.4 seconds left and the Bucs down by one, sophomore Tianna Tarter (Johnson City, Tenn.) made the play of the game, stealing the ball from Western Carolina guard Raziyah Farrington at halfcourt, which led to a fast break lay-up by Tarter to give ETSU the lead.
The Catamounts still had an opportunity at the end but the Buc defense stepped up forcing Western Carolina to commit their 25th turnover of the game with 10 seconds left as the Blue & Gold held on for their third straight victory.
In the fourth quarter, Tarter took the game over scoring 10 of ETSU's last 11 points.
It was a back and forth battle to begin the fourth quarter as ETSU jumped out with four straight points to regain the lead, 30-29. Western Carolina countered with eight straight points to grab a seven point lead with five minutes remaining. ETSU came back with a 9-0 run capped by sophomore Tianna Tarter (Johnson City, Tenn.) drilling a three-pointer from the right corner to give ETSU the lead.
Neither team could shoot the ball in the first 10 minutes of action as the Buccaneers and Catamounts went a combined 5-for-25 from the field. In the second quarter Western Carolina found their offensive rhythm outscoring ETSU, 16-7 in the quarter. The Bucs trailed at halftime for the fifth straight game.
ETSU jumped out quickly in the third quarter scoring five straight points and embarking on a 10-6 run through the first six minutes of action. Junior Shamauria Bridges (Miramar, Fla.) was the catalyst for the Buc offense during the run, scoring eight of the ten points.
Bridges went 2-of-6 from beyond the three-point giving her 64 on the season, ranking her seventh in single-season three-pointer's made in school history.
Tarter led the way for the Bucs with 13 points, 10 of which came in the fourth quarter. Tarter also led the team in rebounds (9) and steals (3). Off the bench senior Shomari Kendrick (Lexington, Ky.) grabbed seven rebounds along with eight points.
The victory gives ETSU a record of 7-3 in SoCon play and 15-10 overall. The Bucs have a quick turnaround as they head to Greensboro, N.C. on Saturday, Feb. 11 to battle with the Spartans of UNC-Greensboro at 2:00 p.m.
ETSU fans wanting to receive Buccaneer news, score updates, in-game promotions and much more sent to their mobile device can do so by signing up for “Buc Updates.” Click here to sign up today!
For more information on Buccaneer women’s basketball, visit ETSUBucs.com and click on the women’s basketball page.