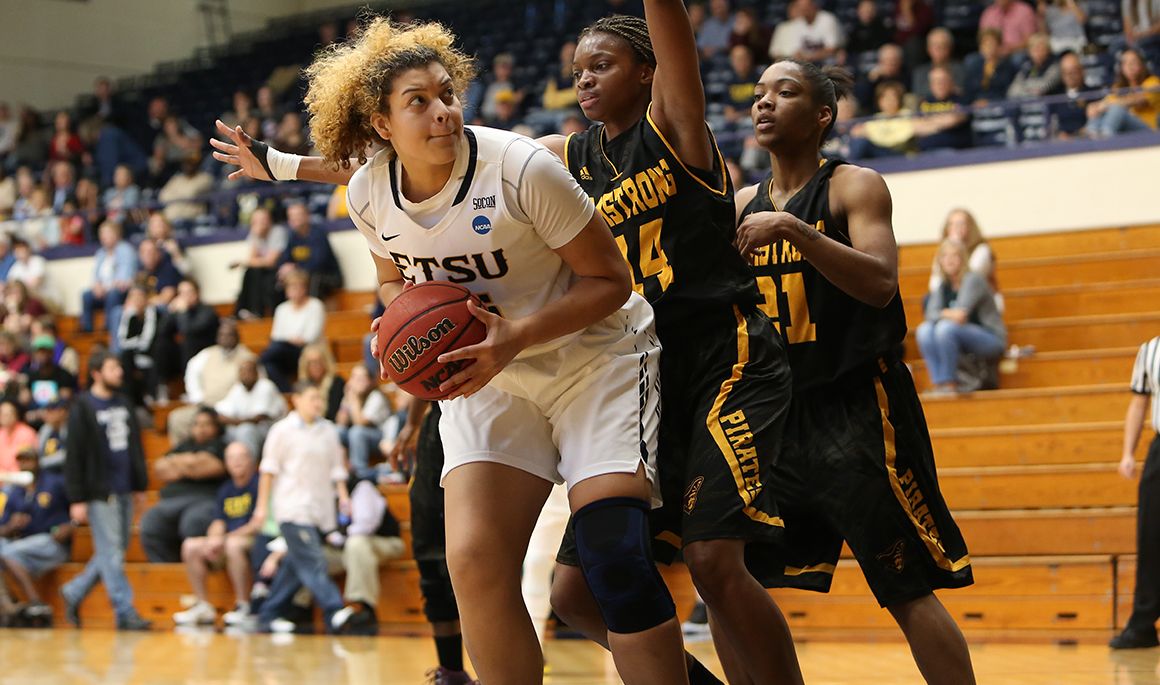 GREENSBORO, N.C. (February 13, 2016) - With the shot clock winding down and the game on the line it was the freshman Raven Dean (Charlotte, N.C.) with the go-ahead basket with 50 seconds left to give the ETSU Women's Basketball team a 80-77 victory over UNC-Greensboro on Saturday afternoon.
Leading for most of the fourth quarter and nearly all game, the Buccaneers found themselves tied with the Spartans of UNC-Greensboro with under a minute remaining. With time winding down in the shot clock sophomore guard Tianna Tarter (Johnson City, Tenn.) dished it off to Dean who drilled a 15-footer with one second left on the shot clock to give ETSU the lead.
UNCG did not go down quielty as the SoCon's leading scorer Lucy Mason scored 17 points in the fourth quarter to rally the Spartans. Mason hit one of her six three pointer's on the night with 2.6 seconds left to make it a one-point game. However after getting fouled on the inbound, Tarter sinked two free throws to secure the victory for the Bucs.
A fourth straight victory for ETSU ties the longest winning streak this season while improving their overall record to 16-10 and 8-3 in SoCon play. ETSU saw three players in double figures with Tarter leading the Bucs with 20 points, junior Shamauria Bridges (Miramar, Fla.) close behind with 19 and Dean with 10 points.
In the first half the ETSU offense was on fire from the field shooting a staggering 52.8 percent. The first quarter saw the Bucs score 10 points in the paint with Bridges leading the way with five points.
Bench production was key for the Blue & Gold in the second quarter outscoring the UNCG bench 8-2. The Bucs opened up an eight point lead, their largest of the game at the three-minute mark of the second thanks to a 12-7 run, forcing UNCG into three turnovers during that span.
At halftime ETSU led 44-38 behind 27 points in the second quarter, the second most points scored in a quarter this season.  It's the first time in six games the Bucs have led at the half. Bridges led the Bucs with 12 points on 5-of-9 shooting from the field.
The pace of the game took a dramatic turn in the third as there was a combined 17 fouls, nine of which came in the first four minutes of action. The Spartans came out firing to start the quarter embarking on a 12-6 run to take a 52-50 lead midway through the third. ETSU countered with a 13-3 run the final three minutes of play to take a lead heading into the fourth.
ETSU scored 75 or more points for the first time since Jan.14 and since 2002 have now registered a 124-21 record when scoring 75 points or more. Off the bench ETSU outscored the Spartans, 21-4 along with dominating the paint, 40-26.
Next up for the Blue & Gold is the final homestand of the season when they host Mercer on Feb.18 at 7:00 p.m. before welcoming Samford on Senior Day Jan.20 at 2:00 p.m. ETSU ends the regular season on the road on Jan.27 at rival Chattanooga.
ETSU fans wanting to receive Buccaneer news, score updates, in-game promotions and much more sent to their mobile device can do so by signing up for “Buc Updates.” Click here to sign up today!
For more information on Buccaneer women’s basketball, visit ETSUBucs.com and click on the women’s basketball page.