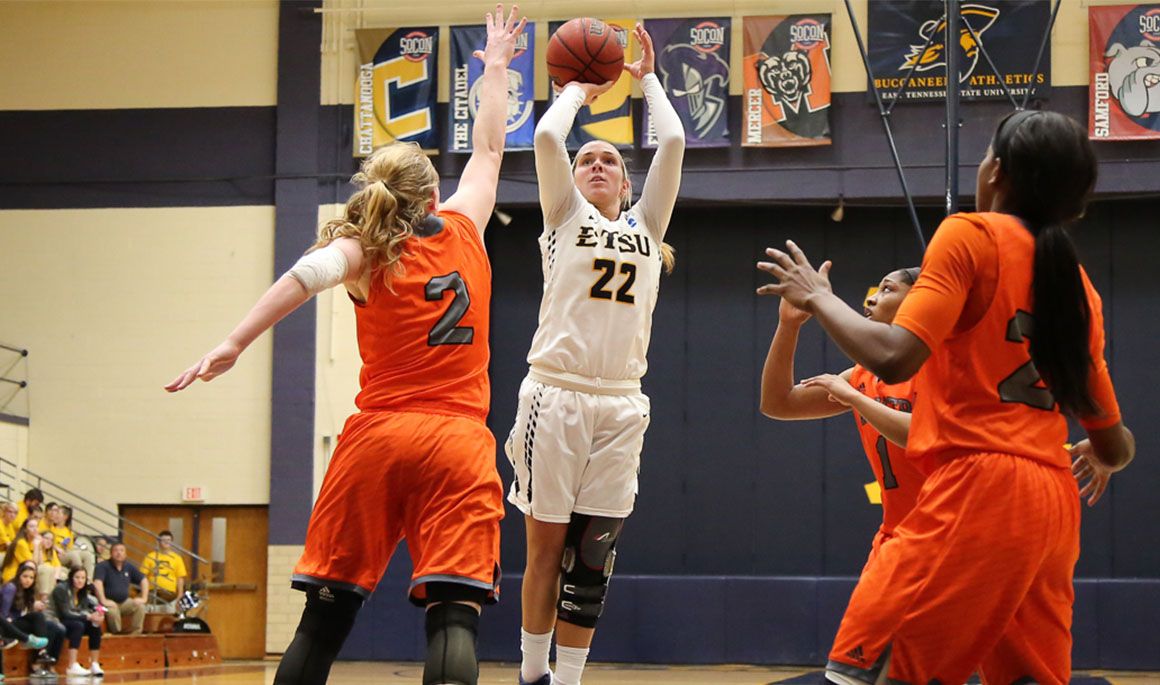 JOHNSON CITY, Tenn. (February 18, 2016) - Against the top team in the Southern Conference the ETSU Women's Basketball team saw it's four-game win streak come to an end as they fell to Mercer, 61-45 inside Brooks Gym on Thursday night.
The Buccaneers were led by junior Shamauria Bridges (Miramar, Fla.) who was the only ETSU player to score in double figures with 15. Junior Shomari Kendrick (Lexington, Ky.) led ETSU with seven rebounds to go along with six points off the bench.
As a team the Blue & Gold shot just 32.1 percent from the field and 22.7 percent from three-point range. From the free-throw line ETSU was 4-of-13 and 1-of-7 in the second half. Mercer from the field shot 47.3 percent including 59.1 percent in
the second half alone.
With ETSU trailing by four heading into the fourth quarter the Bears scored nine straight points to begin the quarter, six points coming from the SoCon's leading scorer Kahlia Lawrence. The Bucs were outscored 16-4 in the fourth quarter.
Mercer raced out to an 8-1 start before the Bucs roared back with a 7-2 run with Bridges scoring five straight points during the run. The momentum shifted towards the Bears to end the quarter as ETSU was held scoreless the final three minutes of the first.
It was a back and forth battle in the second quarter as each team scored 15 points with both teams going 6-of-16 from the field. The Blue & Gold trailed by five heading into halftime with a considerable advantage in points off turnovers at
8-1.
Coming out of halftime Mercer embarked on an 8-2 run to extend their lead before sophomore Tianna Tarter (Johnson City, Tenn.) scored four straight points to give ETSU momentum midway through the third. To end the quarter went on an 11-4 run to end the third which was highlighted by Bridges draining a deep three-pointer from the top of the key.
The Blue & Gold saw their four-game win streak come to an end while their overall record dropped to 16-11 and 8-4 in SoCon play.
ETSU will be back in action for their final home game of the 2015 season on Saturday, February 20 to take on Samford on Senior Day. Tip-off is set for 2:00 p.m. and can be watched on ESPN3.
ETSU fans wanting to receive Buccaneer news, score updates, in-game promotions and much more sent to their mobile device can do so by signing up for “Buc Updates.” Click here to sign up today!
For more information on Buccaneer women’s basketball, visit ETSUBucs.com and click on the women’s basketball page.