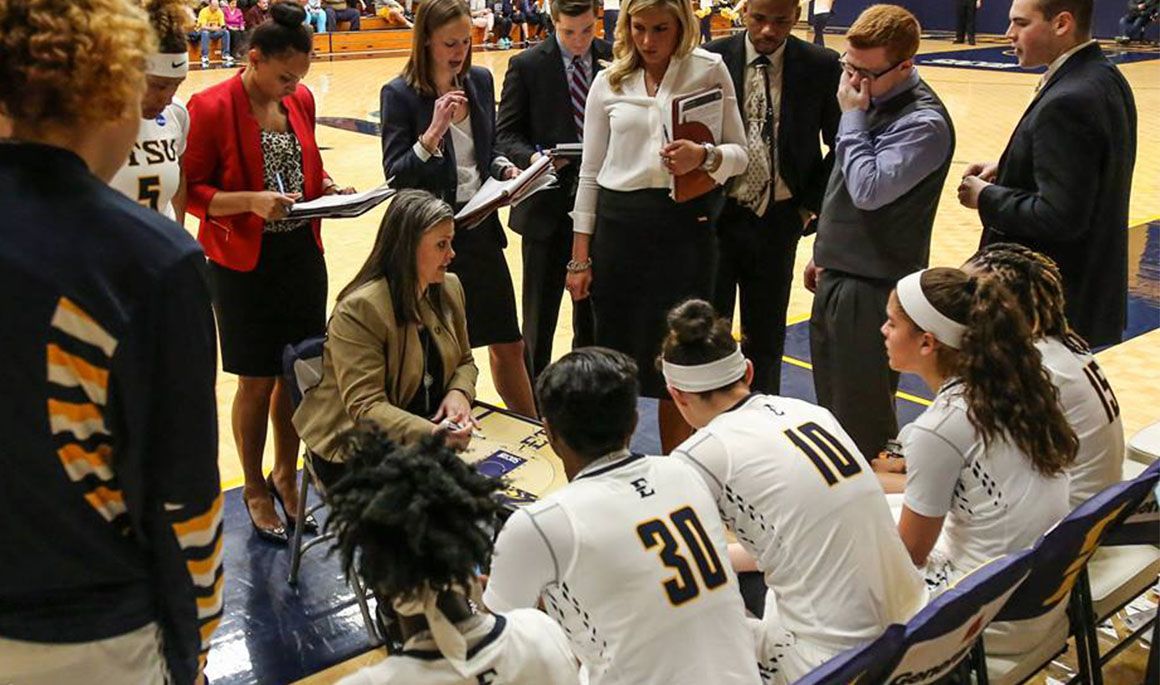 Strong start fades away as ETSU falls to UTC, 66-42
ETSU at Chattanooga | February 27, 2016
Related Links
CHATTANOOGA, Tenn. (February 27, 2016) - In front of a crowd of nearly 2,400 the ETSU Women's Basketball team had two players score in double figures as they fell 66-42 against Chattanooga inside McKenzie Arena on Saturday afternoon.
The Buccaneers end the regular season with an overall record of 16-13 and 8-6 in Southern Conference play.
The sophomore duo of Tianna Tarter (Johnson City, Tenn.) and Malloree Schurr (Montgomery, Texas) led the Bucs as Tarter scored 10 points to go along with a team-high seven rebounds. Schurr registered a career-high 10 points in 30 minutes of play. Off the bench, senior Shomari Kendrick (Lexington, Ky.) had six points and five rebounds.
To start the game, ETSU shot a staggering 46.7 percent from the field with Tarter collecting four of her team-high 10 points in the quarter. Midway through the first the Mocs led by as many as four points before ETSU countered with 10-3 run to end the quarter. ETSU scored the last four points of the quarter to take a 16-13 lead.
The Blue & Gold took their largest lead of the game of five at the 8:24 mark, holding the Mocs scoreless for nearly five minutes spanning from the first and second quarter. UTC was not held scoreless for long as they scored seven straight points in three minutes to regain the lead.
After two made free throw's by senior Chandler Christopher (Greeneville, Tenn.) to tie the game, Chattanooga scored seven straight points to end the half and take a 27-20 lead at halftime. The Bucs in the second scored a season-low four points.
ETSU cut the Chattanooga lead down to six at the midway point of the third as the Bucs were hot from the field shooting 50 percent in the first five minutes of action. The Mocs then proceeded to score 13 straight points embarking on a 16-2 run the final four minutes of the quarter, extending their lead to twenty to start the fourth.
In the fourth the Blue & Gold outscored the Mocs 6-4 in the paint and 3-0 on second chance points. ETSU shot 4-of-12 from the field and 2-of-4 from the free-throw line while holding Chattanooga to just 33 percent from the three-point line.
Overall from the field the Bucs shot 37 percent while shooting a season-low 9.1 from the three-point line. ETSU outscored Chattanooga 10-4 off the bench while the Mocs took control of the paint, outscoring the Bucs, 38-24.
The pace of the game at times was interrupted to due 31 combined fouls as ETSU had 19 while Chattanooga had 12. In the first quarter the Bucs commited six fouls to Chattanooga's one.
ETSU begins postseason play on Thursday, March 3 in the quarterfinals of the 2016 Southern Conference Women's Basketball Championship. On Thursday, the No.4 seed Bucs will take on No.5 seed Furman at 1:45 p.m. at the U.S. Celluar Center in Asheville, N.C.
ETSU fans wanting to receive Buccaneer news, score updates, in-game promotions and much more sent to their mobile device can do so by signing up for “Buc Updates.” Click here to sign up today!
For more information on Buccaneer women’s basketball, visit ETSUBucs.com and click on the women’s basketball page.