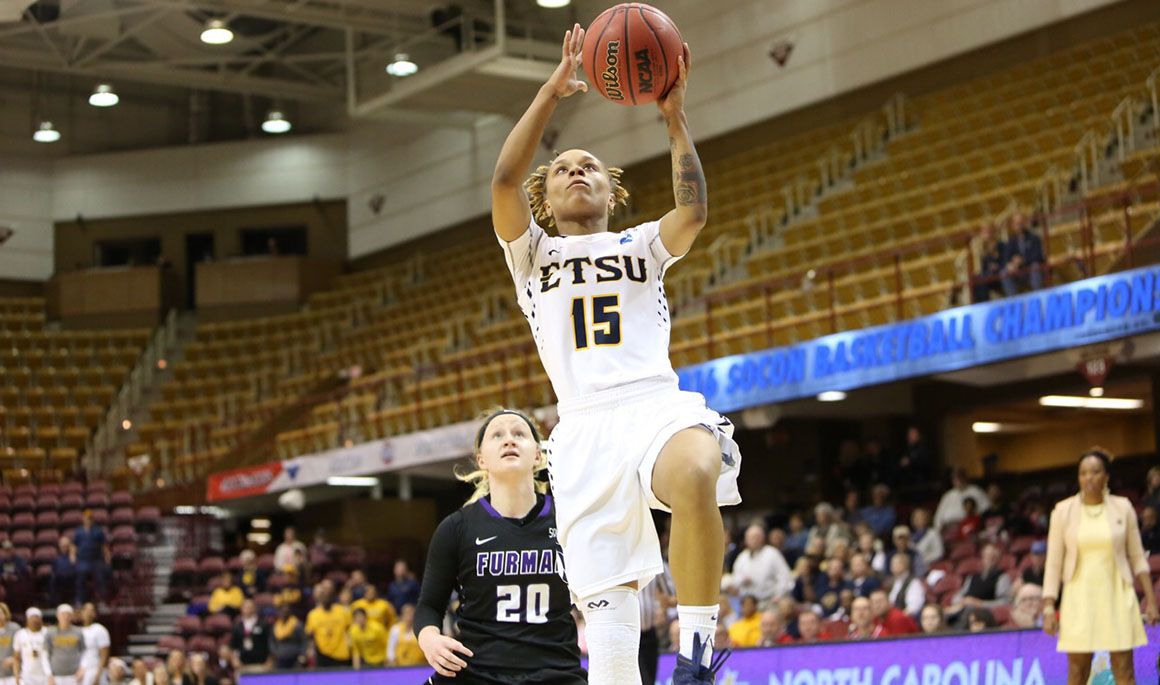 Women's Basketball falls in Nail-Biter to Furman, 71-68
Furman at East Tennessee State | March 03, 2016
Related Links
ASHEVILLE, N.C. (March 3, 2016) - The trio of senior Chandler Christopher (Greenville, Tenn.), junior Shamauria Bridges (Miramar, Fla.) and freshman Tianna Tarter (Johnson City, Tenn.) combined for 58 points as the ETSU Women's Basketball team fell to Furman, 71-68 in the quarterfinals of the 2016 Southern Conference Championships.
Tarter recorded her third double-double of the season registering 25 points to go along with 10 rebounds. Bridges followed with 20 points on 3-of-6 shooting from behind the arc. Christopher in her final game as Buccaneer scored 13 points, seven of which came in the fourth quarter. Freshman Raven Dean (Charlotte, N.C.) recorded a career-high 11 rebounds.
I thought our kids battled and competed. I’m proud of them. If the people writing about us or follow us knew what this team had to go through just to get here, then you’d be on your feet in applause," said head coach Brittney Ezell. "But we aren’t making excuses. We didn’t get the job done today. Congratulations to Furman.”
The long ball was flying early between ETSU and Furman as the first three shots were three-pointer's. After trading three's, the Bucs went on a three minute scoring drought while Furman embarked on a 7-0 run to take a 10-3 lead in the first five minutes of action. First Team All-SoCon guard Whitney Bunn had 10 of her game-high 26 points in the first quarter as Furman connected on their first five three's to take a 21-13 lead after one.
It was a different story in the second as Furman started the quarter 0-of-6 from the field. During the 2:30 scoring drought for the Paladins, the Bucs made a run as First Team All-SoCon guard Tarter scored or assisted on the next 13 points for ETSU.
The Blue & Gold took their first lead of game with 42 seconds left in the quarter as freshman Sadasia Tipps (Hickory, N.C.) sank two free-throws to give the Bucs a 32-31 lead. Furman made a lay-up as time expired in the half to take a 33-32 lead.
In the first half ETSU shot 43 percent from the field and 44 percent from long distance while Bridges and Tarter each had 11 points.
“I think that is who we are. I think that is what have established in our program. I think there will never be a situation where you are ever going to question our kids laying down. It is never going to happen," said Ezell. "I think it speaks to the heart of our kids, and their resiliency, their toughness, and their competitive nature."
ETSU jumped out to its biggest lead of the game of five midway through the third quarter as Bridges and Tarter carried the Bucs in the third, scoring 10 of the first 14 ETSU points. Tarter scored 10 of her 25 in the third including four straight to end the third. After the Bucs held the lead, the Paladins ended the quarter on a 18-8 run to take 58-53 lead into the fourth.
A slow start to the fourth plagued both teams as nobody scored the first four minutes of the fourth. Christopher cut the Furman deficit to one at the four minute mark as she rattled off five straight points for the Bucs. Down the stretch Furman jumped out to as many as five points before the Bucs stormed back late in the game.
With 12.5 seconds left, Christopher missed a free throw that was rebounded by Tipps who then kicked it out to Bridges who nailed a deep three-pointer from the right wing to cut the deficit to one. After Furman sank both free-throws, the Bucs had a shot to tie the game at the end but Tarter missed a three-pointer from left wing that bounced off the front of the rim as ETSU fell, 71-68.
ETSU shot 39.1 percent from the field and 40.9 percent from behind the three-point line. The Bucs committed a season-low seven turnovers while forcing the Paladins into 14 turnovers. The Bucs end the season with an overall record of 16-14 and 8-7 in SoCon play.
ETSU fans wanting to receive Buccaneer news, score updates, in-game promotions and much more sent to their mobile device can do so by signing up for “Buc Updates.” Click here to sign up today!
For more information on Buccaneer women’s basketball, visit ETSUBucs.com and click on the women’s basketball page.