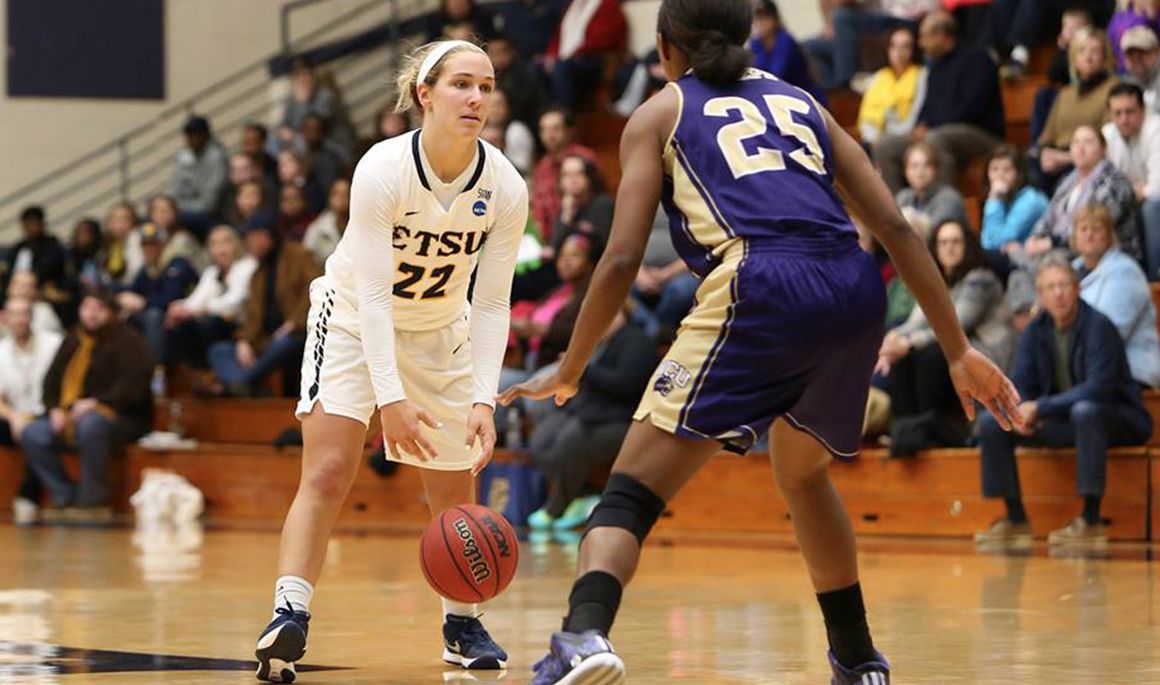 The Bucs outscored the Bulldogs, 17-9 the final four minutes of play

INDIANAPOLIS (November 11, 2016) – In the last four minutes of the game the ETSU women’s basketball team outscored the Butler Bulldogs 17-9 en route to a 68-59 victory for their third straight season opening victory on Friday night inside historic Hinkle Fieldhouse.

The Friday night victory marks the third victory in program history over a Big East opponent.

As a team the Bucs forced the Bulldogs to commit 16 turnovers, scoring 20 points off of those turnovers. Off the bench ETSU scored 14 points with eight points coming from freshman Carley Lytton (Floyd, Va.) who poured in eight points including two three-pointer’s late in the fourth quarter.

It was a back and forth battle all the way until the fourth quarter as the teams were tied at 50-50 with four minutes remaining. After a ferocious block by freshman Anajae Stephney (Knoxville, Tenn.) the Bucs fed off the block momentum as Bridges nailed a step-back three-pointer from the top of the key to give ETSU the lead.

On the defensive end once again the Bucs came through in the clutch as Schurr took a charge with two minutes remaining to give the ball back to the ETSU defense. With the ball, Lytton nailed a wide open three-pointer from the left side to extend the Bucs lead to 58-52. Down the stretch ETSU was able to pull away from the Bulldogs from the free throw line to give ETSU it’s third win in program history over the Big East Conference.

The Bucs took a 12-11 lead after the first quarter as Tarter led the way with five of the 12 points. It was a defensive struggle to start however as neither team scored the first three minutes before Tarter nailed a three from the left side. In the second quarter the ETSU defense shut down the Bulldogs as Butler went scoreless for nearly five minutes midway throough the second to give ETSU a 27-21 lead at halftime.

Coming out of halftime the blue and gold were held scoreless the first four minutes before Bridges knocked down a three to give the Bucs their first points of the quarter. The Butler offense came to life in the third quarter as the Bulldogs embarked on a 13-2 run to take their first lead since the first quarter. ETSU headed to the fourth quarter trailing Butler, 41-39.

In the final quarter ETSU outscored the Bulldogs, 29-18 including a 17-9 run the final four minutes to improve their record to 1-0 on the season.

November 15 will be the next time the Bucs hit the court in one of the most anticipated games on the schedule as ETSU takes on the University of Tennessee in Johnson City for the first time since 1981. The game will be held inside the ETSU/MSHA Athletic Center (mini-dome) with tip-off set for 7:00 p.m.