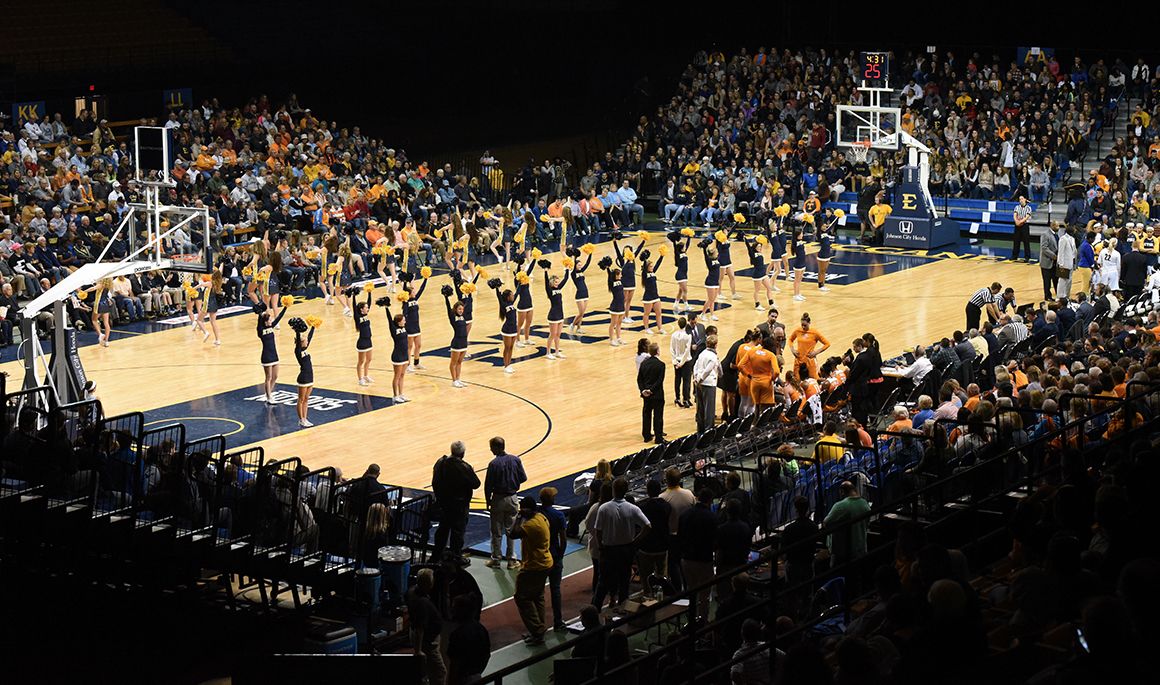 ETSU forced the Lady Vols to commit 16 turnovers scoring nine points off those turnovers. Overall the Bucs have 32 bench points compared to Tennessee’s 19. ETSU was also a dominant force at the rim recording three blocks along with recording 14 offensive rebounds. From the field, ETSU shot 31.1 percent while the Lady Vols shot 56.1 percent.

“Regardless of score, they played hard, they played together,” said Ezell. “You will never question the heart of anybody wearing blue and gold around here and I am extremely proud to be their coach today and proud to be able to bring this event to our region.”

In the first quarter the blue and gold led the 13th ranked team in the country for a total of 4:27 as ETSU had a four-point lead at the midway point of the quarter. Tennessee regained the lead at the four-minute mark as Diamond DeShields knocked down a three from the top of the key to give the Lady Vols a 16-14 lead. DeShields had a game-high 28 points to go along with 10 rebounds. Down the stretch in the first, UT embarked on a 15-2 run while holding the Bucs scoreless the final three minutes of the quarter.

The Bucs were unable to find the basket in the second quarter as ETSU was held scoreless the first three minutes of the second. Senior Shamauria Bridges (Miramar, Fla.) ended the scoreless streak as she nailed a three-pointer from the ride side while falling away to cut into the Tennessee lead. The Bucs embarked on an 8-0 run to cut the UT lead to 12 before the Lady Vols answered right back with a 12-1 run to take a 46-27 lead into halftime.

Coming out of the half, the Bucs were able to exert energy into the crowd inside the ETSU/MSHA Athletic Center as ETSU scored five of the first ten points in the quarter highlighted by Tarter’s left-handed scoop lay-up to cut the Lady Vols lead to 16. During the final five minutes of the third, UT outscored the Bucs 14-5, forcing four turnovers in the final four minutes.

Micah Norris scored seven of her team-high 13 points in the fourth after going 2-of-4 from the field and drilling a three-pointer from the left corner to begin the quarter. Off the bench in the fourth, freshman Kayla Marosites (Elizabethton, Tenn.) scored six points going 3-of-4 from the free-throw line. In the end, Tennessee went 5-of-5 from the field in the final four minutes to clinch a 83-58 victory.

ETSU will be back in action on Sunday, Nov.20 as they host the Winthrop Eagles inside Brooks Gym at 2:00 p.m.