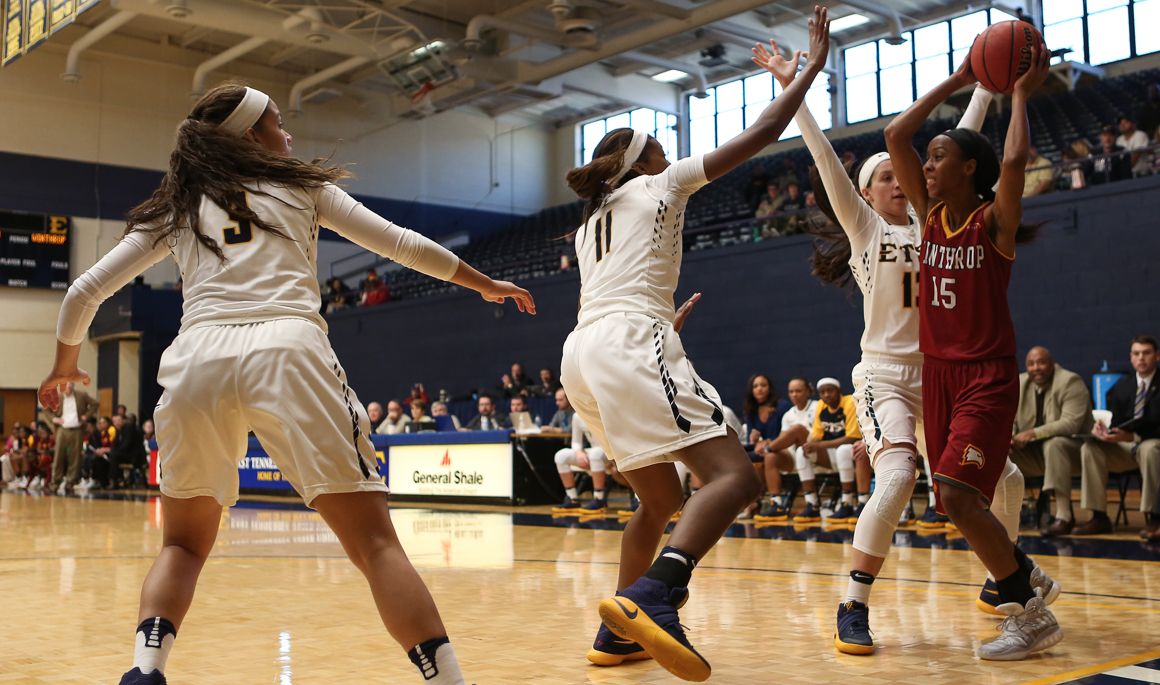 The Bucs controlled the glass recording a season-high 46 rebounds with 21 coming on the offensive end. Sophomore Sadasia Tipps (Hickory, N.C.) led the team with eight rebounds for the 13th time in her career. ETSU registered a season-high 13 steals and held the Eagles to just 37.8 percent shooting.

After a turnover filled first quarter for Winthrop in which the Bucs forced the Eagles to commit eight turnovers, ETSU quickly raced out to a 10-8 lead after the first 10 minutes of play.

In the second quarter a personal 4-0 run by Tarter gave the Bucs their first double-digit lead of the afternoon at 28-17 with three minutes remaining in the half. From that point on the Winthrop offense ignited making four of their next five shots to cut into the ETSU lead. Ultimately Winthrop ended the quarter on a 13-2 run to tie the game up at 30-30 heading into halftime.

The third quarter was dominated by the blue and gold as ETSU outscored Winthrop 22-7 including an 8-0 run to begin the quarter. Freshman duo Jada Craig (Winston-Salem, N.C.) and Kayla Marosites led the way, each scoring six points in the quarter. Marosites connected on one three-pointer from the top of the key while Craig went 2-of-3 from the field. ETSU was able to extend their lead to as big as 17 in the third.

It was a low scoring affair in the fourth as both teams combined to score just 18 points in the quarter. Despite scoring just 10 points in the final ten minutes of play, the Bucs shot 55.6 percent from the field with Tarter going 3-for-3, scoring six of her team-high 14 in the fourth.

With the victory, the Bucs improve their overall record to 2-1 and will play the final game of a three-game homestand on Wednesday, Nov.23 at 7:00 p.m. against Appalachian State.