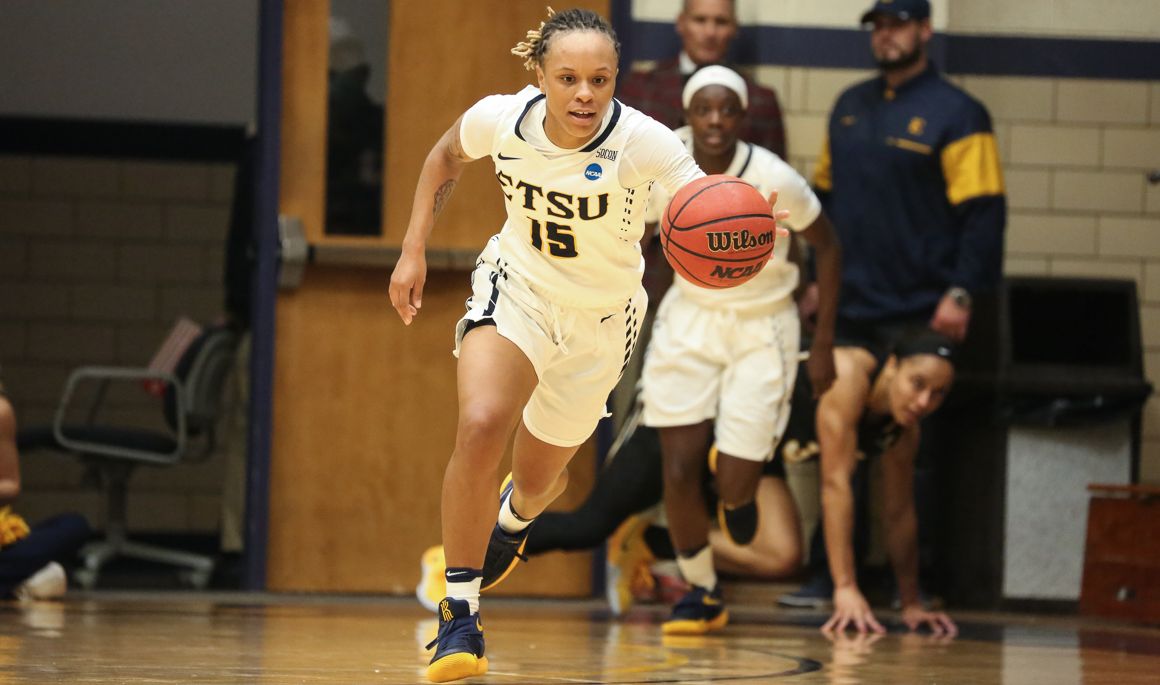 JOHNSON CITY, Tenn. (November 23, 2016) – On Wednesday night inside Brooks Gym the ETSU women’s basketball team fell 71-68 in heartbreaking fashion to Appalachian State as the Mountaineers banked in a game-winning three pointer from the top of the key as the clock hit zeros.

The Bucs trailed by three with 11.1 seconds left before junior Tianna Tarter (Johnson City, Tenn.) evaded two App State defenders and nailed a three-pointer from the top of the key with five seconds remaining. The Mountaineers proceeded to go the full length of the court and heave a shot from long distance that banked off the glass and in.

Tarter led the Bucs with 19 points along with eight assists and five rebounds on 5-of-14 shooting from the field. In the fourth quarter the Johnson City, Tenn., native scored 12 points earning seven of the 12 from the free-throw line. Senior Shamauria Bridges (Miramar, Fla.) also scored in double figures with 12 points on 2-of-4 shooting from beyond the three-point line.

It was a physical first quarter between the Bucs and the Mountaineers as each team recorded six personal fouls. Midway through the first quarter the Bucs trailed App State, 11-4 as ETSU went nearly six minutes without a field goal. At the 1:27 mark in the first, sophomore Carley Lytton (Floyd, Va.) ended the scoring drought with a three-pointer from the left wing to cut into the App State lead.

Towards the end of the first half, the Buccaneer offense got scorching hot connecting on five straight shots to cut the App State lead to just two. ETSU closed the second quarter on a 6-2 run to take a 35-31 lead into halftime. The Bucs outscored the Mountaineers, 26-16 in the second.

Momentum from the second quarter carried over into the third for ETSU as the Bucs went on a 10-4 run stemming from the second to take their largest lead of the game at eight. App State battled back to take their first lead of the second half with 2:20 left in the third quarter. Sophomore Raven Dean (Charlotte, N.C.) quickly helped the Bucs get the lead back as she pumped faked two Mountaineer defenders to get two of her eight points on the night. Down the stretch in the third, ETSU went 1-of-7 from the field while App State was held scoreless the final 2:34.

In the fourth the lead changed seven times as the former Southern Conference rivals clashed the final 10 minutes of play. Tarter scored ETSU’s last seven points including a three-pointer from the top of the key with five seconds left to knot the game up at 68-68. App State guard Joi Jones drove it the length of the floor the final five seconds to bank in a shot from behind the three-point line to hand ETSU the heartbreaking defeat.

With the loss, the Bucs overall record drops to 2-2. The blue and gold will look to bounce back on the road on Saturday, Nov.26 as ETSU squares off with Northern Kentucky. Gametime is set for 1:00 p.m.