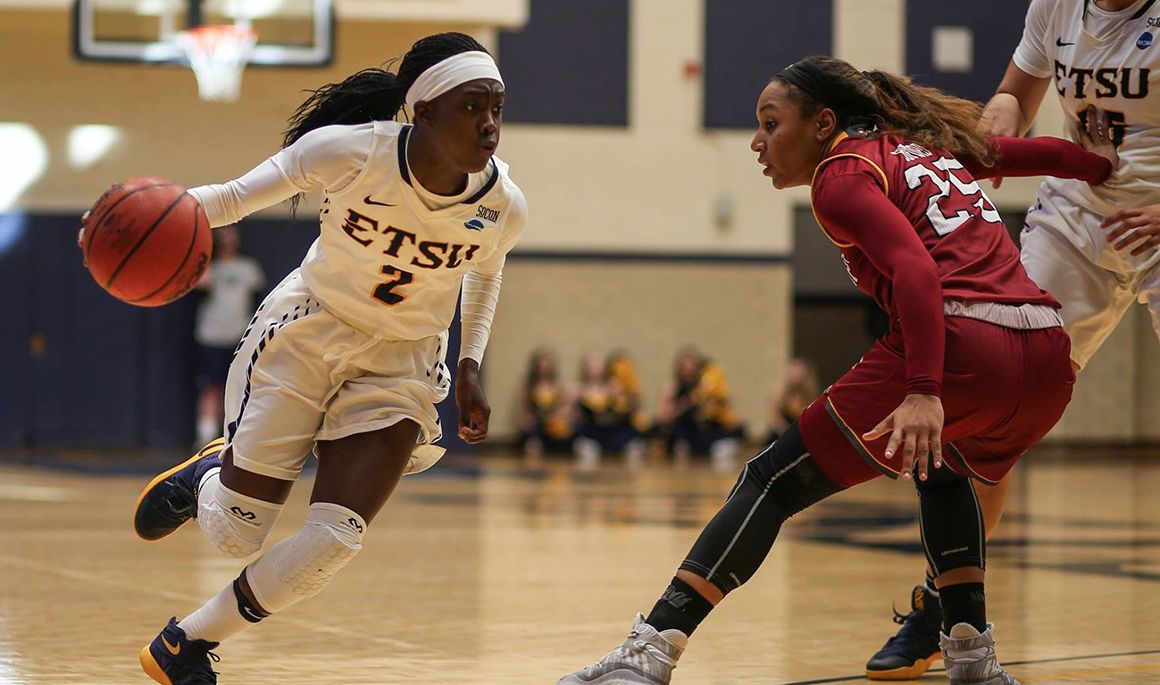 HIGHLAND HEIGHTS, Ky. (November 26, 2016) – On Saturday afternoon the ETSU women’s basketball team scored 29 points in the second half including 16 in the fourth quarter but was unable to complete a comeback as the Buccaneers fell to Northern Kentucky, 62-56 inside BB&T Arena.

ETSU never led during the contest and cut the NKU lead to three with 57 seconds remaining before the Norse iced the game with three consecutive free-throws to hand the Bucs their second straight defeat.

The Bucs were led offensively by senior Shamauria Bridges (Miramar, Fla.)  who recorded a game-high 23 points and shot 50 percent (6-of-12) from beyond the three-point line. The six made threes is the fourth most in a single-game in ETSU history. Down the stretch it was freshman Anajae Stephney (Knoxville, Tenn.) who carried the Bucs with a career-high 11 points including eight straight the final three minutes of play.

As a team the blue and gold shot 42 percent for the field compared to NKU’s 38.8 percent. For the third time this season ETSU was able to win the turnover battle forcing the Norse to commit 16 turnovers compared to a season-low 12 for the Bucs.

In the first quarter the Bucs started slow as Northern Kentucky quickly raced out to an 8-2 lead through the first three minutes of play. Midway through the quarter ETSU was held scoreless for nearly four minutes before sophomore Raven Dean (Charlotte, N.C.) banked in a 15-foot jumper to cut the NKU lead to 11. In the first, ETSU was outscored 18-7 while Bridges went 0-of-6 from the field.

It was a much different story for ETSU and Bridges in the second quarter as Bridges started off the quarter with and-one to bring the Norse lead to single digits. NKU had their largest lead of the game at 14 midway through the second before Bridges nailed back-to-back three-pointers to get the ETSU offense going. Near the end of the half, ETSU went on a 7-0 run with six coming from Bridges to trail 32-27 at the half. Overall in the second, Bridges scored 14 of her game-high 23 points.

ETSU was able to cut the lead down to six in the third quarter as Bridges once again connected on back-to-back threes to trim the NKU lead to 42-36. However, the Norse responded with a 6-0 run of their own thanks to Mikayla Terry who tallied two straight threes to extend the Norse lead back to double digits. The Bucs gained momentum from junior Malloree Schurr (Montgomery, Texas) to end the quarter as the junior forward rattled off five straight points.

The momentum quickly faded for both teams in the fourth quarter as neither team was able to get the ball in the basket through the first three minutes of play. Midway through the quarter, Stephney connected on a left-hook floater from just inside the free-throw line to cap off a 5-0 run for ETSU and cut the lead to 52-48. Stephney scored eight of the final 10 points for the Bucs as Northern Kentucky iced the game from the free-throw line to take the 62-56 victory.

ETSU will have a quick turnaround as they prepare to host Murray State on Monday, Nov.28 inside Brooks Gym. Tip-off is set for 7:00 p.m. and can be watched on ESPN3.