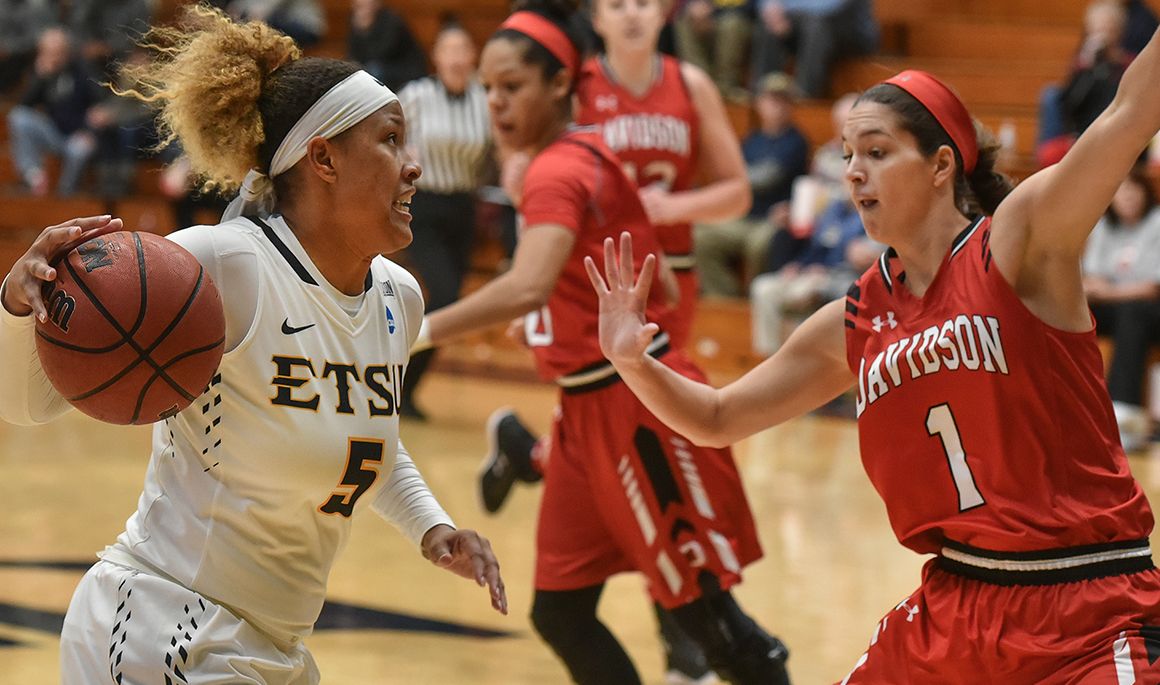 JOHNSON CITY, Tenn. (December 3, 2016) – It was the largest margin of victory this season for the ETSU women’s basketball team as three players scored in double figures to help the Buccaneers top Davidson, 76-56 on Saturday afternoon inside Brooks Gym.

For the third consecutive game the Bucs had three players score in double figures with junior Tianna Tarter (Johnson City, Tenn.) leading the way with a game-high 25 points. Senior Shamauria Bridges (Miramar, Fla.) poured in 16 points on 5-of-11 shooting from three-point range.

Sophomore Raven Dean (Charlotte, N.C.) recorded her second double-double in three games registering 12 points and 10 rebounds. For the 14th time in her career sophomore Sadasia Tipps (Hickory, N.C.) led ETSU on the boards with 11 rebounds. A milestone was also reached for fourth year head coach Brittney Ezell as she became the third fastest coach to reach 50 wins at ETSU in school history

The Bucs outrebounded Davidson, 44-40 while making it tough at the rim as the blue and gold recorded eight blocks with Bridges, Tarter and junior Micah Norris (Murfreesboro, Tenn.) each having two. Defensively, the Bucs were stifling forcing 22 turnovers, scoring 34 points off of turnovers.

ETSU gets back in the win column with their largest margin of victory this season and improves its overall record to 4-4. The Bucs next contest will be on the road at Campbell on Tuesday, Dec.6 before coming back home to host SEC opponent, Vanderbilt on Thursday, Dec.8 at 7:00 p.m. inside Brooks Gym.

After Davidson scored the first basket of the game, ETSU rallied with six straight points and an 8-2 run to take an 8-4 lead midway through the first. The Wildcat offense responded with a 6-0 run the final four minutes of the first to grab a 13-10 lead after 10 minutes of play.

It was a much different story for ETSU in the second quarter as the blue and gold outscored Davidson, 28-12 including knocking down six three-pointers in the quarter. With the shot clock winding down and trailing by one the Bucs got the ball into the hands of sophomore Carley Lytton (Floyd, Va.) who drilled a three from the right wing to give ETSU a 22-21 lead.

Through the final four minutes of the first half, ETSU connected on five threes to spark a 22-4 run to extend their lead to double-digits and take a 38-25 lead into halftime. In the second, ETSU shot 58.8 percent from the field and a staggering .63.6 percent from long distance. The 28 points was the second most in a quarter for ETSU this season.

Davidson battled back in the third as the Wildcats cut the ETSU lead to single digits with 4:48 remaining as the Bucs went four minutes scoreless from the field. It didn’t’ take long for the Buccaneer offense to respond as Tarter scored four straight points to extend the Bucs lead back to double-digits. Overall in the third, Davidson outscored ETSU, 18-13.

In the fourth the blue and gold scored five straight points to begin the quarter to give ETSU an 18-point lead. The Bucs jumped out to as many as 21 in the fourth as Tarter scored eight of her 25 in the fourth. Freshman Kayla Marosites (Elizabethton, Tenn.) rattled off six points and four rebounds in the final 10 minutes of play.