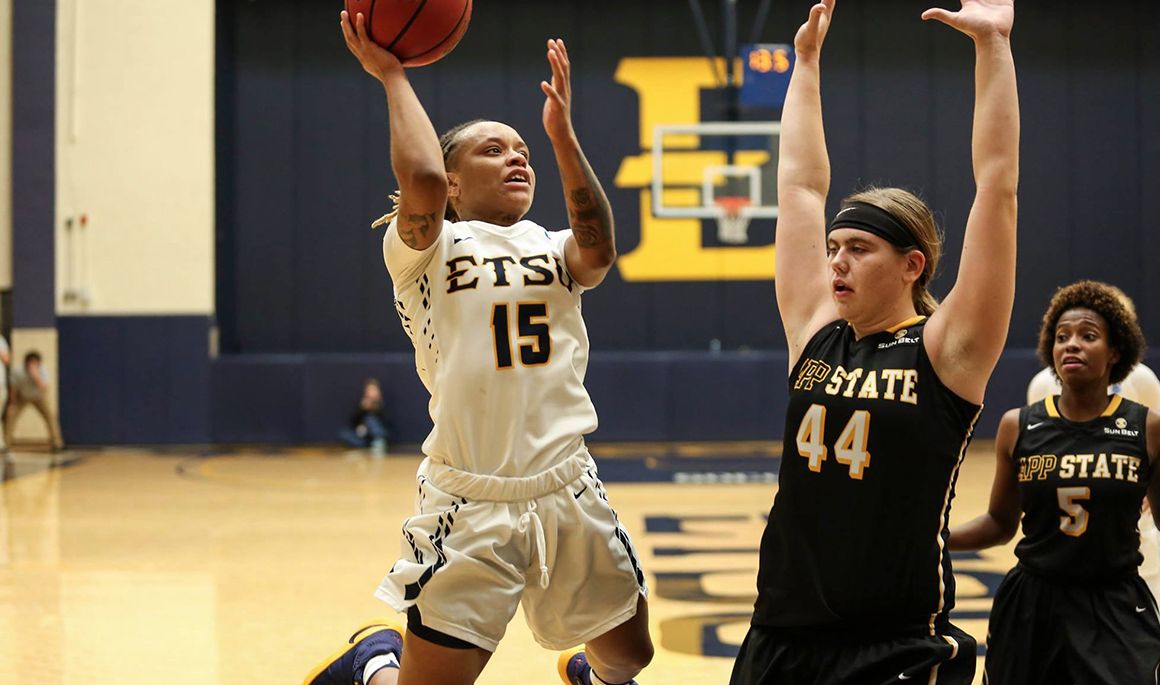 ETSU rallied back from 13 points down in the fourth quarter

BUIES CREEK, N.C. (December 6, 2016) – Southern Conference Player of the Week Tianna Tarter (Johnson City, Tenn.) scored at least 20 points for the fourth straight game as she banked in the game-winning shot with two seconds left to give ETSU a thrilling 56-55 victory over Campbell on Tuesday night.

Tarter had the ball in her hands as the clocked winded down and drove the lane past two Campbell defenders and floated up a shot that banked off the glass to give ETSU their second straight victory. The Johnson City, Tenn., native recorded her fourth straight 20-point game registering 20 points along with six rebounds and four assists.

In the fourth quarter the Buccaneers trailed by as many as 13 before embarking on an 11-2 run to claw their way back into the game. ETSU shot 37 percent from the field while going 10-of-14 from the free-throw line including 6-of-8 in the fourth quarter. The Bucs forced 25 turnovers, scoring 18 points off of those turnovers.

It’s a quick turnaround for the Bucs as they host their second SEC opponent of the season in Vanderbilt on Thursday, Dec. 8 at 7:00 p.m. inside Brooks Gym.

Campbell jumped out to their biggest lead of the first half midway through the second quarter as the Camels went on a 4-0 run for a 21-17 lead. The ETSU offense slowed down in the quarter scoring just eight points on 3-of-11 shooting from the field to trail 21-20 at the half.  The Bucs eight points was the second fewest in a quarter this season while scoring the fewest points in a half this season.

After cutting the lead to two in the first minutes of the third quarter, the Fighting Camels raced out to a double-digit lead with an 8-0 run. During the Campbell run, ETSU on three of its four possessions had a turnover while Campbell earned their first double-digit lead of the game at 40-29. ETSU was outscored 21-11 in the quarter as the Fighting Camels ended the quarter on a 10-2 run.

ETSU was down by as many as 13 in the fourth quarter before Tarter nailed back-to-back three-pointers to spark an 11-2 run for the Bucs. With 46 seconds left the blue and gold defense stood tall as they forced Campbell to commit a shot clock violation to get the ball back and down by one. Tarter then knocked down the game-winning shot with two seconds left to give ETSU their first two-game winning streak of the season. It was Tarter’s first game-winner since last season at Mercer.

ETSU improved its overall record to 5-4 and will host SEC opponent Vanderbilt on Thursday, Dec.8 at 7:00 p.m. inside Brooks Gym.