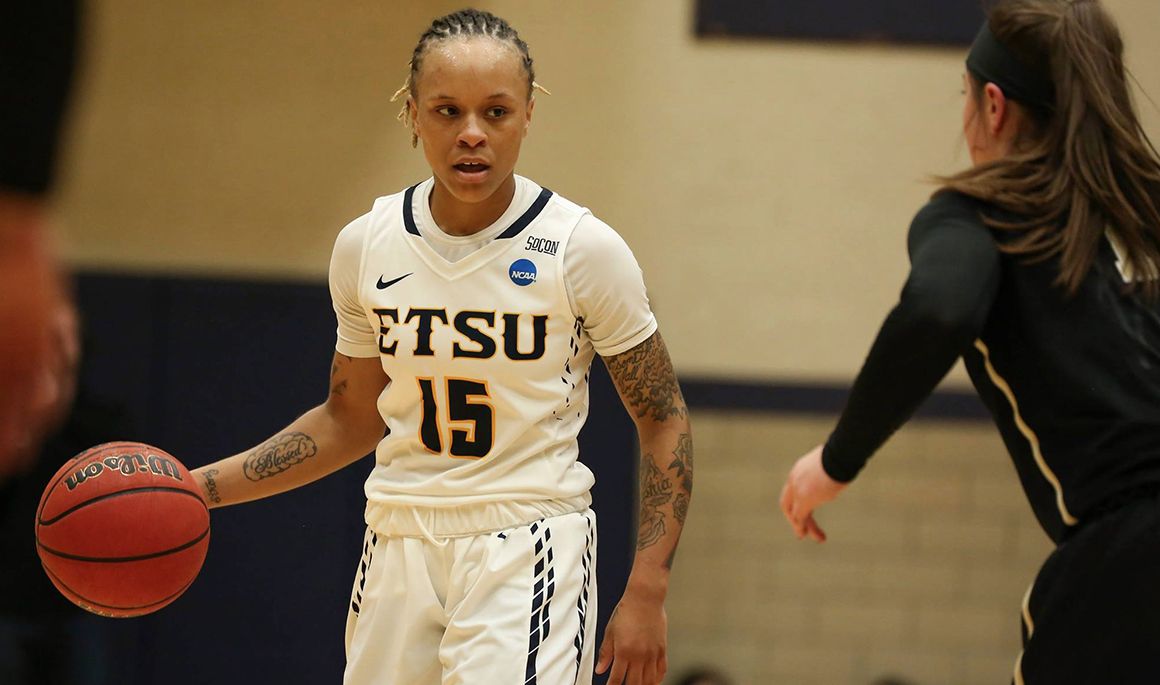 JOHNSON CITY, Tenn. (December 8, 2016) -  With a little over 1,000 fans packing Brooks Gym on Thursday night junior Tianna Tarter (Johnson City, Tenn.) put on a historic performance scoring a career-high 35 points on 15-of-29 shooting from the field as ETSU women’s basketball fell to Vanderbilt, 80-72.

Tarter’s 35 points is the most points scored by a Southern Conference player this season. Her 15 field goals made was the second most made in the NCAA this season and third most in a single-game in ETSU history. The junior guard has recorded 20 or more points in five straight games.

The Bucs forced Vanderbilt to commit 23 turnovers scoring a staggering 26 points off those turnovers. Both the Bucs and the Commodores shot 42.4 percent from the field. Overall the blue and gold led for a total of 24 minutes with only five players scoring for ETSU.

The Buccaneers fed off the raucous crowd in the first quarter jumping out to a 14-9 lead. Highlighting the fast start was Bridges knocking down a right wing three-pointer after sophomore Raven Dean (Charlotte, N.C.) missed a three but grabbed her own rebound and dished it out to Bridges.

After the Commodores tied the game up at nine, ETSU embarked on a 10-0 run, with nine of the ten points coming from Bridges as the Bucs jumped out to a 17-9 advantage. ETSU jumped out to their largest lead of the game at 12 with three minutes to go in the first. Down the stretch in the first, Tarter went on a personal 4-0 run to give ETSU a lead after the first 10 minutes of play.

ETSU slowed down the Commodores offense in the second quarter forcing Vanderbilt to go 1-of-7 from the field through the first four minutes of play. However, Vanderbilt was able to rally back with a 6-2 run of their own and cut the lead to two with two minutes to play. A lay-up by Tarter before the end of the half helped the Bucs take a 39-36 lead into halftime.

It was a scorching start for the Buccaneer offense in the third quarter as ETSU connected on their first five shots of the quarter to extend their lead. With 4:45 left in the quarter, Vanderbilt earned their first lead of the game off a corner three from Miaya Seawright. The Commodores ended the third on an 8-4 run to secure a 59-57 lead heading into the final 10 minutes of play.

Through the first five minutes of play in the fourth both teams were unable to find the basket as ETSU and Vanderbilt combined to score just seven points in three minutes. ETSU cut the Vanderbilt lead to three with 3:30 left after Tarter flew by her defender and laid it in. The Commodores countered quickly with a three-pointer by Rachel Bell. Down the stretch, ETSU went 1-of-5 from the field en route to the 80-72 defeat.