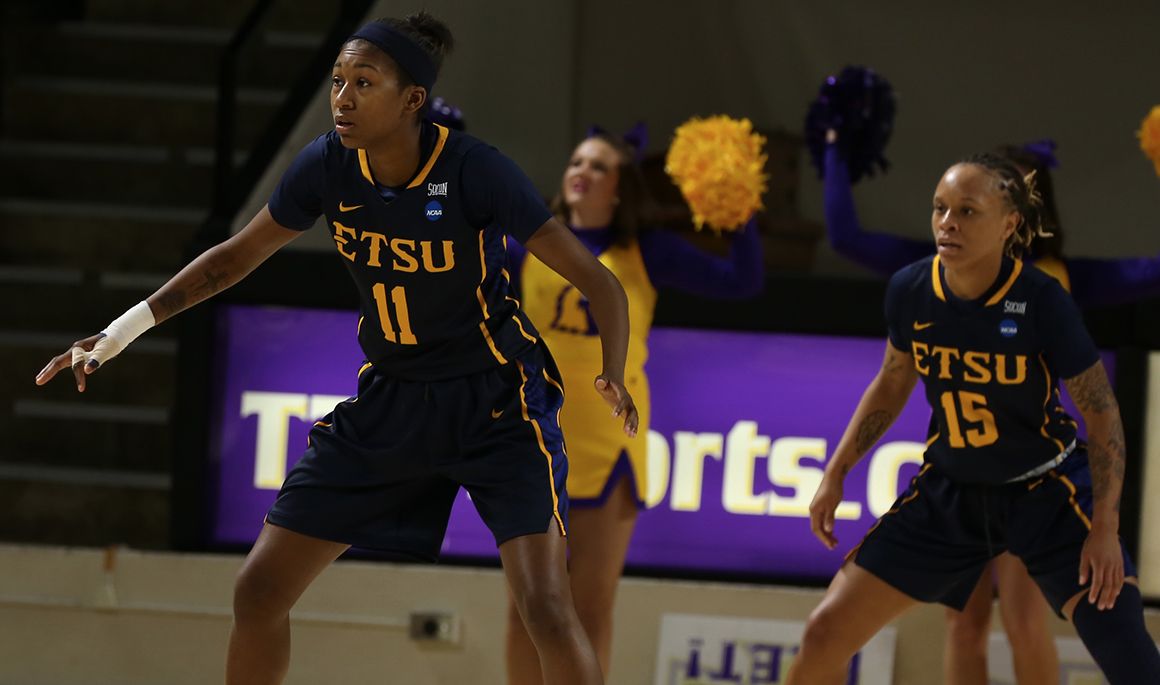 Bridges, Dean, Norris and Tarter each score in double figures

It was a group effort in Cookeville as the Bucs had four score in double figures with Tarter leading the way with 30 points along with 10 rebounds. It was the second straight 30-point game for Tarter and second double-double performance of the season. For the sixth straight game Tarter scored at least 20 points.

Bridges for the fifth straight game scored in double figures as she scored 14 points on 4-of-12 shooting from the three-point line. The senior guard is now six three-pointers away from becoming ETSU all-time career leader in three’s made.

Dean filled up the stat sheet for the Bucs scoring 17 points while grabbing eight rebounds along with two assists, one steal and one block. Off the bench Norris provided 18 valuable minutes scoring 11 points while registering five rebounds.

As a team, ETSU scored a season-high 82 points while shooting 46.8 percent from the field. The Bucs had a season-low nine turnovers while scoring 46 points in the paint. The blue and gold earned its third road victory and improved their overall record to 6-5.

ETSU will enjoy a week off before playing their next game as they host Elon on Dec.17 at 2:00 p.m. inside Brooks Gym.

In the first quarter, the Bucs quickly jumped out to a 5-0 lead as Bridges knocked down a three to open up the game while Tarter scored high off the glass in her first shot of the contest. Midway through the first, Tennessee Tech responded with an 8-0 run to take their first lead of the game at 12-11. Down the stretch in the first, ETSU went scoreless nearly five minutes as the Golden Eagles ended the quarter on a 10-2 run.

Tarter took the game over in the second going 4-of-6 from the field to regain the lead for ETSU. The Bucs and Golden Eagles battled back and forth in the second until ETSU with three minutes left went on a 9-2 run to seize a 38-32 lead into halftime. After the first half, Tarter led all scorers with 15 points.

ETSU jumped out to their largest lead of the game at 15 as the Buccaneers connected on their first three baskets of the third to take a double digit lead. The Buccaneer offense continued to roll in the third as ETSU embarked on a 13-5 run with Tarter scoring six of the 13 en route to the 15-point advantage. Towards the end of the half, junior Micah Norris scored six straight points as both teams went a combined 8-for-8 the final three minutes of the third.

Tennessee Tech made it close in the fourth as the Golden Eagles went 4-of-5 from the field to spark a 7-1 run to get as close as six midway through the final quarter. After missing a free-throw with under a minute to play, TTU closed the gap to five after Tennessee Tech’s Yaktavia Hickson converted an and-one. However, Tarter scored her 30th point of the night on a made free-throw to ice the game.