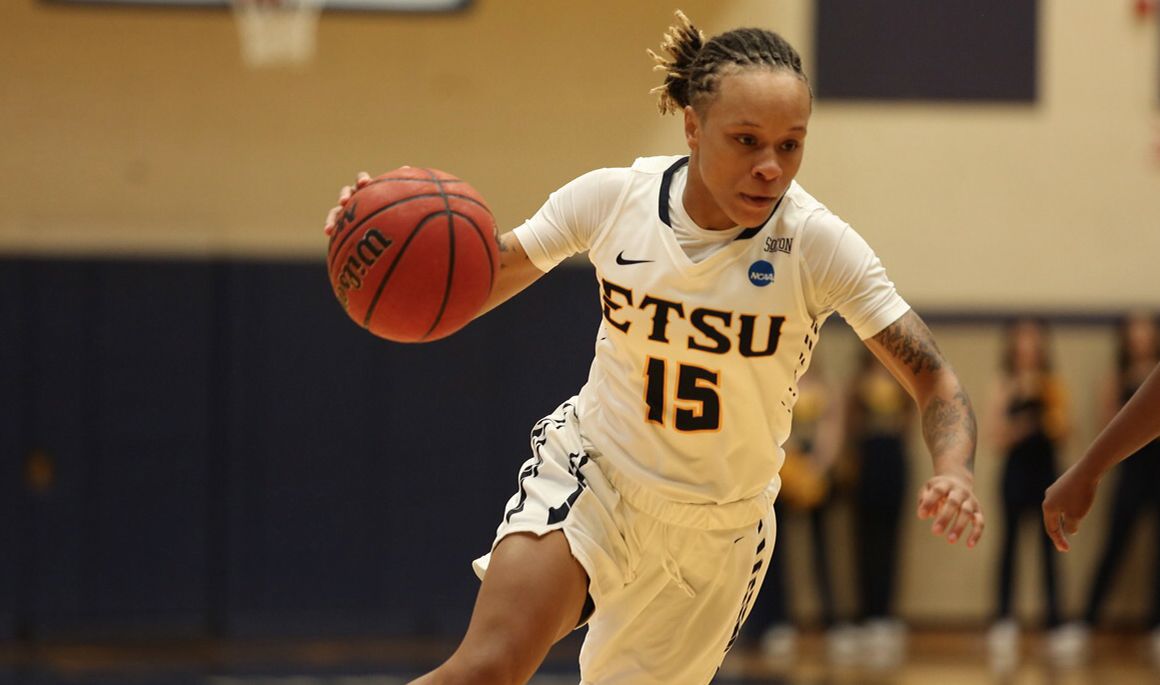 JOHNSON CITY, Tenn. (December 17, 2016) – Junior guard Tianna Tarter (Johnson City, Tenn.) added another milestone to her incredible 2016-17 season as she became the 23rd member of the ETSU Women’s Basketball 1,000-point club on Saturday afternoon as the Buccaneers suffered a 79-51 setback versus Elon inside Brooks Gym.

Needing 12 points to eclipse the 1,000-point mark, Tarter registered a team-high 13 points along with seven rebounds, five assists and two steals.  Tarter earned her 1,000 career point on a free-throw with 2:23 remaining in the third quarter. It is the second straight season an ETSU player has reached 1,000 points as Tarter joined the club in 66 career games.

Despite snapping her streak of games with at least 20 points, Tarter continued another streak, reaching double digit points in each of the last seven games. Senior Shamauria Bridges (Miramar, Fla.) extended her streak to six straight games with ten or more points, recording 11 points in 29 minutes of action.

ETSU recorded season-lows in both points (51) and shooting percentage (23.3). A bright spot for the Buccaneer offense was off the bench as ETSU had 25 bench points with eight coming from freshman Kayla Marosites (Elizabethton, Tenn.). Elon forced the blue and gold to commit 19 turnovers scoring 24 points off of turnovers. From the field, the Phoenix shot 53.7 percent with four players in double figures.

The Bucs move to 6-6 on the season and will have little time to rest as they travel Miami, Fla. to take part in the Miami Holiday Tournament, Dec.19-20, hosted by the University of Miami. ETSU will play Maine on Monday, Dec.19 at 3:00 p.m. and will play either Miami or Coppin State on Tuesday, Dec. 20.

To begin the game Elon jumped out to a 4-0 lead before the Bucs and Phoenix traded baskets to tie the game up at 6-6 with six minutes remaining in the first. From that point on, Elon embarked on a 11-0 run as ETSU went scoreless nearly three minutes to give Elon a double-digit lead after the first.

In the second quarter, ETSU went just 2-of-17 from the field en route to scoring just nine points in the quarter. After Bridges connected on back-to-back three-pointers to begin the quarter, the blue and gold went scoreless the final seven minutes of the first half. Elon led 41-20 at the half as ETSU was dealt its largest halftime deficit of the season and lowest scoring half.

History was made in the third quarter as with 2:23 left, Tianna Tarter was fouled and went to the free-throw line looking for 1,000 career points. Tarter hit nothing but net on the first attempt to become the 23rd member of the 1,000-point club. In the third period alone the Johnson City, Tenn., native scored nine points including a personal 6-0 run to cut into the Elon lead.

A total of 38 points were scored in the fourth quarter as the Bucs and Phoenix went basket for basket down the stretch. Off the bench in the fourth, Kayla Marosites tied a career-high with eight points on 2-of-3 shooting from the field while going 3-of-5 from the free-throw line. Her twin sister freshman Kelci Marosites (Elizabethton, Tenn.) got in on the scoring action, recording a career-high five points.