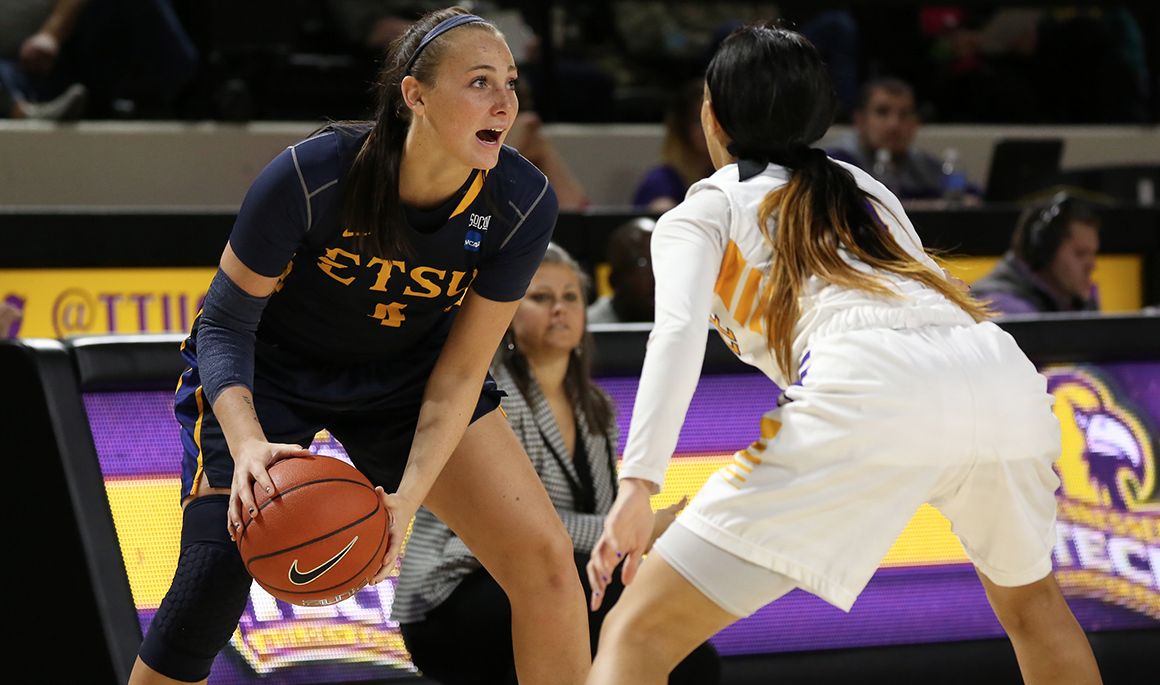 ETSU will play either Coppin State tomorrow at 3:00 p.m.

CORAL GABLES, Fla. (December 19, 2016) – On day one of the Miami Holiday Tournament, the ETSU women’s basketball team scored a season-low 48 points en route to a 61-48 defeat versus Maine on Monday afternoon inside the Watsco Center.

Junior Tianna Tarter (Johnson City, Tenn.) scored 12 points while recording five rebounds and five assists in the loss. It’s the eighth straight game Tarter has scored in double figures and ninth time this season in which she has had 12 points, two rebounds, three assists and one steal.

Off the bench sophomore Carley Lytton (Floyd, Va.) provided the ETSU offensive with a spark scoring 12 points on 50 percent shooting from the field. Lytton also knocked down three three-pointers, one shy from tying her career-high in made threes. Fellow sophomore Raven Dean (Charlotte, N.C.) had nine points while senior Shamauria Bridges (Miramar, Fla.) had eight. Bridges is three three-pointers shy from breaking the all-time ETSU career record for three’s made.

From the field, ETSU shot just 28.8 percent compared to Maine’s 45.6 percent. However, ETSU was able to hold a sizeable advantage on the free-throw line doubling the amount of attempts of the Black Bears. The Bucs shot a season-high 81.3 percent from the line going 13-of-16. On the glass, the blue and gold outrebounded Maine, 39-32 as junior Micah Norris (Murfreesboro, Tenn.) led the team with seven rebounds.

ETSU to 6-7 on the season with two non-conference opponents left on the schedule. The Bucs will close out the Miami Holiday Tournament tomorrow at 3:00 p.m. against Coppin State.

Sophomore Raven Dean (Charlotte, N.C.) got the scoring started for the Bucs with a 15-foot jumper from the left side to tie the game up at 2-2. The tie lasted just 36 seconds as the Black Bears embarked on an 11-0 run, holding ETSU scoreless for over six minutes en route to a 19-9 lead after the first.

Post play from the bench in the second quarter lifted the Bucs as sophomore Morgan Martin (Davenport, Iowa) grabbed two rebounds along with three points. Martin ended the night with three points and four rebounds. Maine jumped out to their biggest lead of the game of 17 in the second as the Black Bears led 35-22 at half.

The ETSU offense was off to a cold start to begin the third quarter missing their first two shots before Tarter went on a personal 6-0 run to inch the Bucs back into the contests. The run ultimately ended up being an 11-0 run for ETSU to cut the Maine lead to four. In the third quarter, the Bucs outscored Maine, 16-10.

Despite cutting the lead to four, that was as close as the Bucs got as Maine in the final four minutes scored four straight points to earn the 61-48 victory.