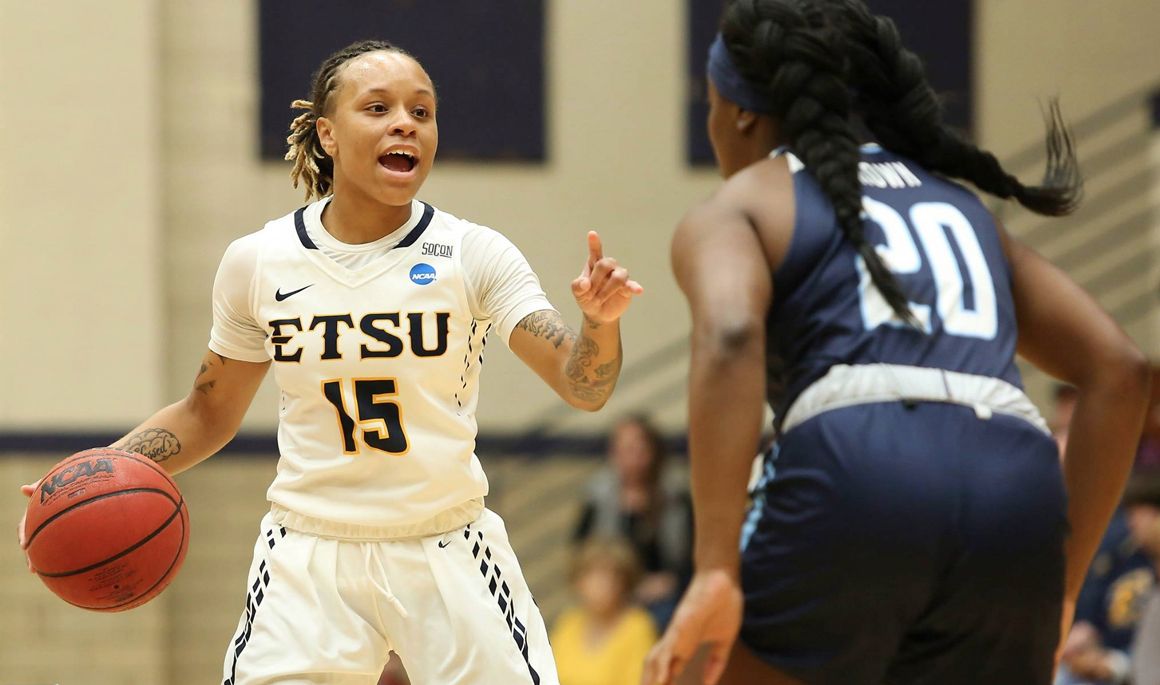 JOHNSON CITY, Tenn. (December 28, 2016) – East Tennessee State and Old Dominion each garner two of the top ten scorers in the country and on Wednesday junior Tianna Tarter (Johnson City, Tenn.) had the upper hand scoring 24 points along with seven rebounds and seven assists en route to a 70-60 victory for the Bucs over Old Dominion.

For the 10th straight game the Johnson City, Tenn., native recorded double digit points and earned her second straight 20-point performance. Tarter who ranks fifth in the NCAA in total points, registered her eighth 20-point game of the season. In the second half, Tarter scored 22 of her 24 points including 15 points in the fourth quarter.

It was the second straight contest in which the blue and gold had three players in double figures as Tarter led the way with 24 points, followed by senior Shamauria Bridges (Miramar, Fla.) with 15 and sophomore Raven Dean (Charlotte, N.C.) with 11 points. From the field, ETSU shot 41.7 percent while holding Old Dominion to 32.9 percent shooting.

On the defensive end sophomore Sadasia Tipps (Hickory, N.C.) dominated grabbing eight rebounds along with tying a career-high with three blocks. Senior Yamile Rodriguez (Santo Domingo, Dominican Republic) joined Tipps in the defensive effort with six rebounds while recording a season-high three blocks. As a team, the Bucs recorded nine blocks on the night, just four off the school record of 13.

After grinding through one of the most difficult non-conference schedules in ETSU women’s basketball history, the Bucs have an overall record of 8-7 and will begin Southern Conference play on Thursday, January 5 in Macon, Ga. versus league-leading Mercer.

In the first quarter the nation’s second leading scorer, Old Dominion’s Jennie Simms had six of ODU’s first eight points as the Lady Monarchs had an 8-6 lead midway through the first. Near the end of the quarter, ETSU scored four straight points while ODU went scoreless the final 2:30. Despite the scoreless streak the Lady Monarchs held 12-11 lead after the first 10 minutes of play.

The ETSU offense got going in the second quarter as the Bucs scored 21 points including a 14-4 run midway through the second. The second quarter run for ETSU was sparked by back-to-back three-pointers from Bridges and sophomore Carley Lytton (Floyd, Va.). In the final five minutes of the first half, ETSU outscored ODU, 17-6 to take a 32-30 lead into halftime.

Bridges became the first player to reach double figures in the third quarter as she connected on jumper from the left side to extend the ETSU lead. Midway through the third both teams went cold from the field as ODU went just 1-of-6 while the Bucs were held scoreless nearly three minutes. Despite the low shooting percentage, ETSU held a 51-44 lead heading into the fourth.

It was the Tianna Tarter show in the fourth quarter as she scored 15 of her game-high 24 points. With three minutes left and the game tied at 58-58, Tarter off a Jennie Simms missed three-pointer went coast-to-coast en route to a lay-up to give ETSU the lead. The coast-to-coast lay-up highlighted a 16-2 ETSU run the final four minutes of the game to secure the 10-point victory.