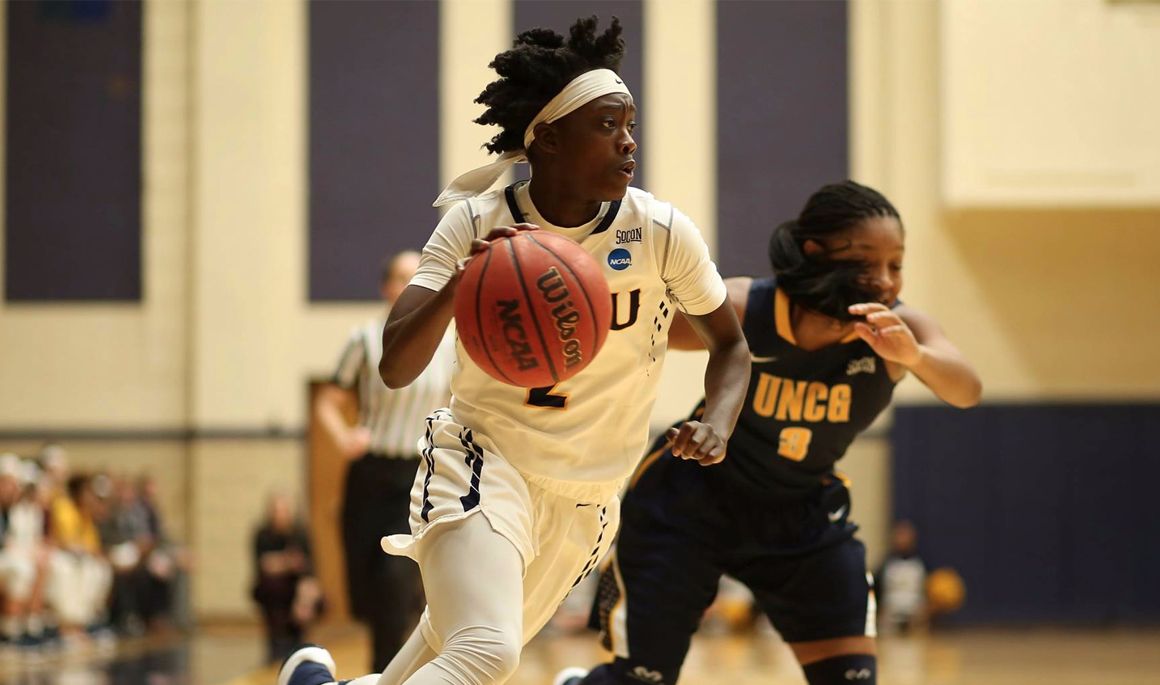 JOHNSON CITY, Tenn.  (January 19, 2017) – With a one-point lead late in the fourth quarter the ETSU Women’s Basketball team embarked on a 10-3 run the final six minutes to surge past UNCG, 60-52 inside Brooks Gym on Thursday night.

ETSU improved its overall record to 10-9 and 2-2 in Southern Conference play. The Buccaneers have now recorded double digit wins in each of the last three seasons. The victory clinches ETSU’s fourth straight conference home opener and ninth straight overall against UNCG.

Leading in the scoring department was senior Shamauria Bridges (Miramar, Fla.) who had a game-high 17 points including nine in the third quarter. The second half of the ETSU backcourt, junior Tianna Tarter (Johnson City, Tenn.) had 12 points along with eight rebounds and seven assists. Tarter has scored in double figures in 13 of the last 14 contests.

Overall, ETSU forced UNCG to commit 16 turnovers scoring 19 points off those turnovers. From the floor the blue and gold shot 36.5 percent compared to UNCG’s 30.5 percent. The Bucs once again made the most of their opportunity from the free-throw line as ETSU went 17-of-25.

It’s a quick turnaround for ETSU as they prepare to host Western Carolina on Saturday, Jan.21 at 2:00 p.m. inside Brooks Gym.

First Quarter:
• UNCG goes 0-of-8 from the floor through the first four minutes of the game
• Junior Malloree Schurr (Montgomery, Texas) gets the Bucs on the board to ignite a 7-0 run
• Bucs play #ETSUTough defense through first five minutes of play, holding the Spartans to 1-of-12 shooting from the floor.
• After a UNCG timeout, Spartans go on an 8-2 run to tie the game at 10-10
• Freshman Kelci Marosites (Elizabethton, Tenn.) knocks down a three from the left wing before the end of the first quarter to give ETSU a 13-11 lead.

Second Quarter:
• ETSU begins second quarter with four straight points to extend lead to 17-11
• Bucs go 4-of-5 from the floor to start the second to take an eight point lead over the Spartans
• In the final two minutes of the second quarter, UNCG goes 3-of-3 from the floor and embarks on a 8-2 run to cut into the ETSU lead
• ETSU leads 26-24 at halftime.
• Sadasia Tipps led ETSU with five points while Tianna Tarter had four points, six rebounds, three assists and two steals at half.

Third Quarter:
• Overall, ETSU scored a total of 21 points in the third quarter.
• After the Bucs scored the first basket of the third, UNCG goes on a 7-0 run to take their first lead of the game at 31-28.
• UNCG earned their largest lead of the game at four points with 4:35 left in the third quarter
• Through the final three minutes of the third, the blue and gold go on a 14-4 run
• The run is highlighted by Shamauria Bridges getting hot from the floor knocking down her final three shots of the quarter.