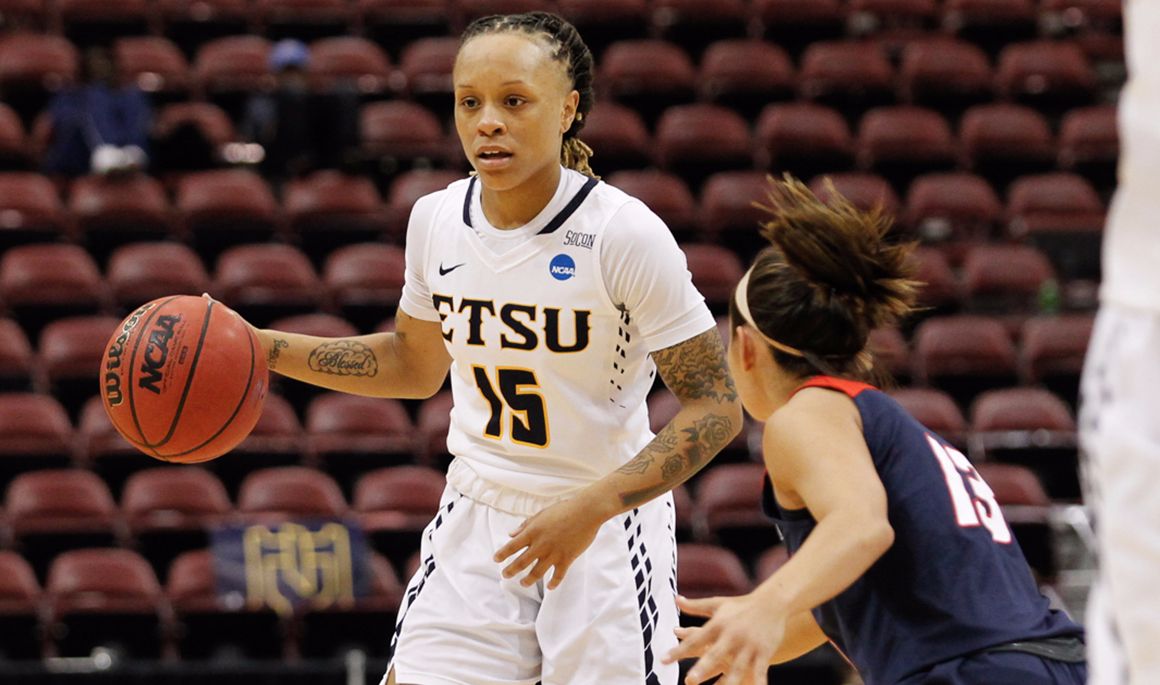 The Buccaneers were down by as many as 21 in the third quarter before embarking on the comeback trail that got them to within one with 37 seconds left. After a made lay-up by Samford, ETSU with eight seconds left had a chance to tie the game but the ball was knocked out of the hands of Tarter as the buzzer went off.

“We were down in the first half but we just had to play defensive, get stops and score to start a comeback,” said Tarter.

Tarter with 39 points also collected 10 rebounds to record her sixth double-double of the season. The junior guard went 13-of-22 from the field and 6-of-11 of the three-point line. Tarter’s six made three’s was a career-high and tied for the second most three’s made in a season in ETSU history.

The Johnson City, Tenn., native recorded her sixth 30-point game of the season was six points away from breaking the SoCon Tournament record set by Western Carolina’s Jennifer Gardner (45 points) back in 2005. The First Team All-SoCon selection scored 31 points in the second half including 16 in the third quarter alone.

“She is a once in a lifetime type of kid and I am honored to be her coach,” said head coach Brittney Ezell.

Fellow backcourt mate senior Shamauria Bridges (Miramar, Fla.) collected 10 points, five of which came in the fourth quarter. Bridges ends the season with 90 made three-pointers, ranking as the most in a single-season in ETSU history and fifth most in SoCon history.

Third Team All-SoCon selection sophomore Raven Dean (Charlotte, N.C.) grabbed 10 rebounds while scoring six points. It was Dean’s eight game this season in which she has grabbed at least 10 rebounds.

In the first half, the Bucs went 6-of-25 (24%) from the floor while Samford shot a staggering 41.4 percent. ETSU in the first half was held to just 18 points, the fewest points scored in a half this season. The blue and gold outscored Samford, 46-30 in the second half, shooting a remarkable 50 percent from the floor.

It was a slow start for both teams in the first quarter as ETSU and Samford scored a combined seven points through the first six minutes of play. However, the Bulldogs offense started making shots as Samford went on a 15-5 run the final four minutes of the first to take a 20-12 lead after one.

Samford extended their lead to double digits in the second quarter after going five of seven from the field. The hot start to the second for Samford was highlighted by an 11-0 run that put the Bulldogs up 35-18 with 4:30 to play in the first half. Neither team was able to score the final three minutes of the second as Samford took a 37-18 lead into halftime.

After being down by as many as 21 in the third quarter, ETSU began a furious comeback with Tarter leading the way. Midway through the third the Bucs embarked on an 13-5 run with 11 of the 13 Buccaneer points coming from the First Team All-SoCon performer. Overall, Tarter scored 16 in the third to cut the deficit to 52-39 heading into the fourth.

Tarter once again took over in the fourth, scoring 15 points while surpassing her previous career-high of 35 points, set back on Dec.8 against Vanderbilt. ETSU in the fourth cut the Samford lead to one three times but was unable to take the lead. With 8.7 seconds left and down by three, the Bucs had an opportunity to send the game into overtime as Tarter tried to get off a three from the right corner but it was knocked out of her hands as time expired.

ETSU ends the season with an overall record of 16-14 and 8-6 in SoCon play. It’s the second straight season the Bucs have registered 16 wins.