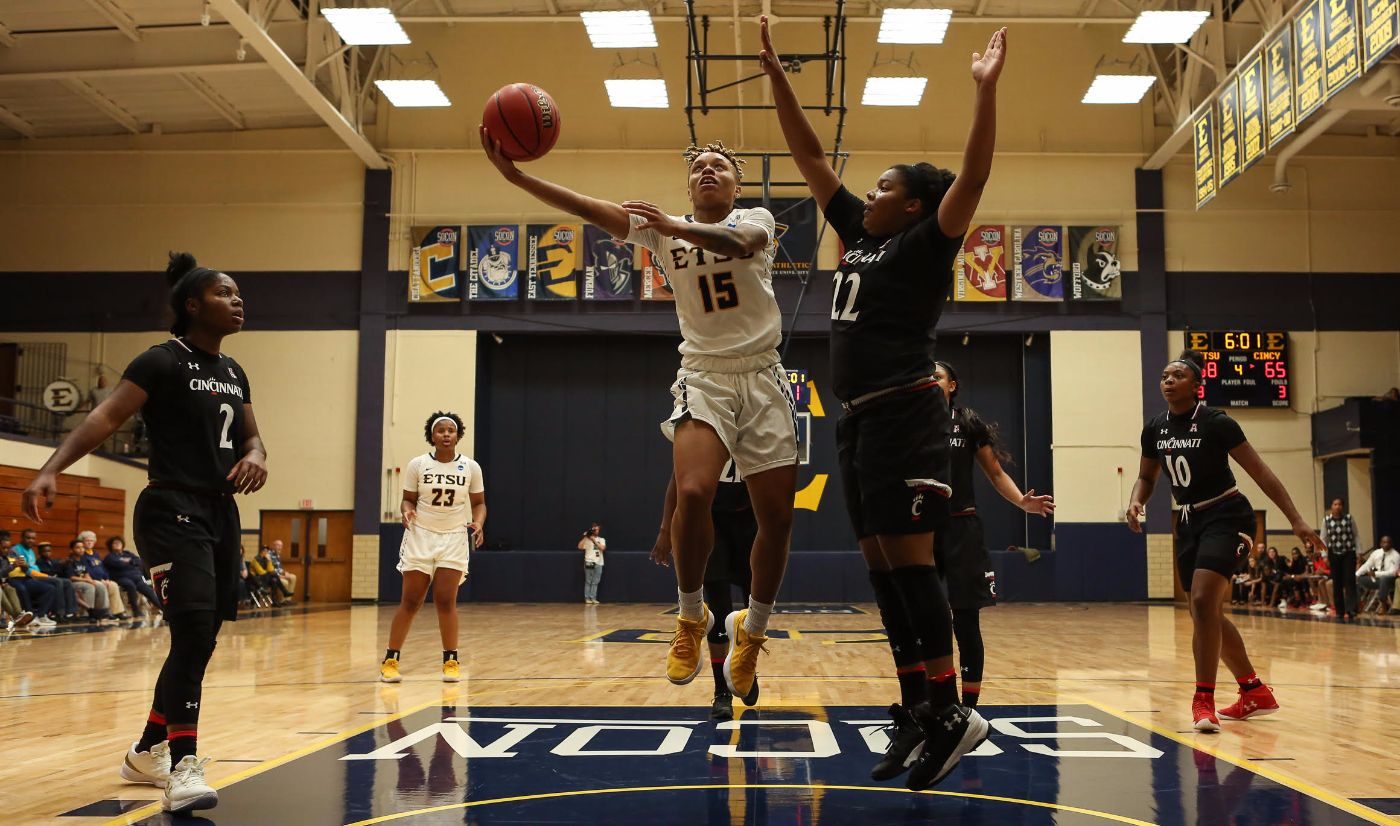 JOHNSON CITY, Tenn. (Nov. 10, 2017) – With a loud and packed crowd inside Brooks Gym, the ETSU women’s basketball team picked up an 87-77 win over Cincinnati on the opening night of basketball. An 11-0 run in the third quarter helped the Bucs pick up their fourth straight season opening win.

After a slow first quarter, back-to-back three pointers by Shy Copney put the Bucs within five after coming off a ten-point deficit. A layup by Alayjah Sherer (Tupelo, Miss.) then put the Bucs within three, but Cincinnati continued to hold their lead. Before heading into the half, Jada Craig (Winstom-Salem, N.C.) hit a three-pointer to put the Bucs within four points of the Bearcats’ lead.

Heading into the second half, Copney had four of ETSU’s seven three-point shots. Sherer and Britney Snowden (Pensacola, Fla.) gave the Bucs back-to-back layups giving the Bucs a chance to tie the game at 46. Tianna Tarter did not make an attempt until early in the third quarter. Her first points came from two foul shots that put her on the line after a technical foul by Cincinnati. Snowden gave the Bucs a lead after her layup, but Shanice Johnson from Cincinnati tied the game. From there, the Bucs were unstoppable as they went on their 11-0 run to make the score 64-56 at the end of the third quarter. Haynes-Overton gave the Bucs a ten-point lead after picking up a steal and driving down the court for a layup. Tarter, Snowden, and Haynes-Overton each had six points in the third quarter.

In the fourth quarter, the Bearcats fought back to come as close as three points, but Tarter’s three put the Bucs back up by six. Haynes-Overton, Dean, and Copney all pitched in three-pointers to keep their lead. ETSU’s last seven points came from Tarter’s and Haynes-Overton’s free throws.

The Bucs will get a day off before hitting the road to take on #14 ranked Tennessee in Knoxville, Tenn.  on Sunday, Nov. 12. The game is set for 2:00 p.m. and will be streamed on the SEC network.

Check out the highlights below: