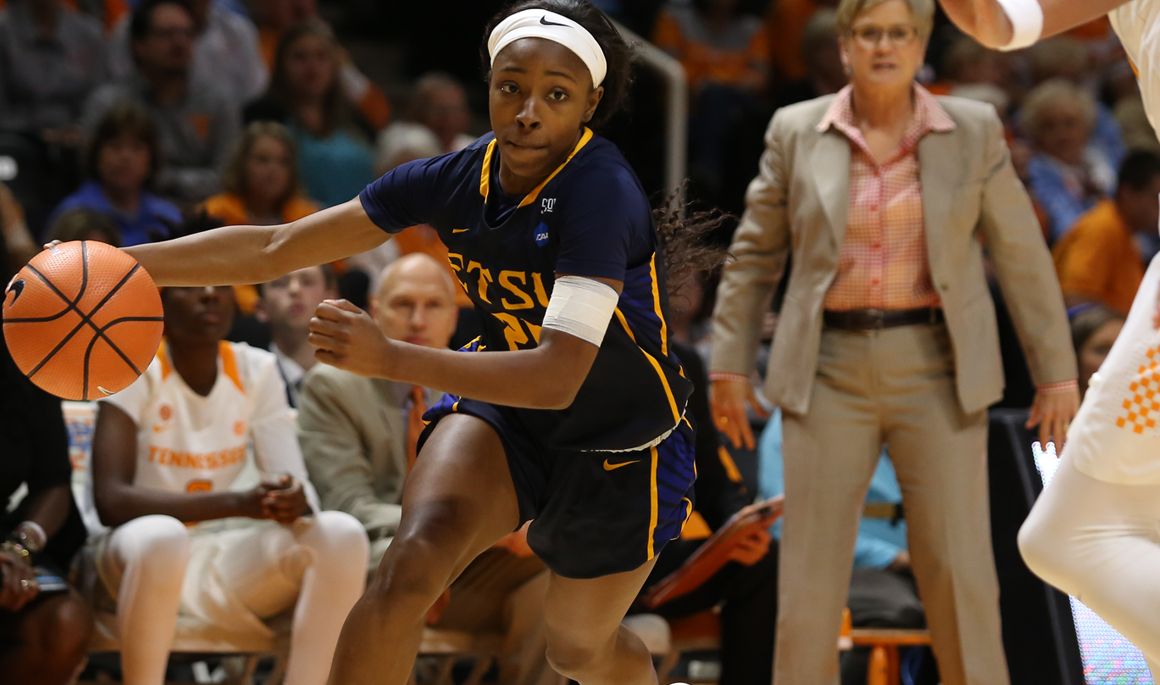 BOONE, N.C. (Nov. 15, 2017) – Stellar free-throw shooting helped the Bucs cruise to a 70-57 win against Appalachian State in ETSU’s second road game of the season. The Bucs went 22-28 from the free throw line and forced the Mountaineers to commit 19 turnovers. In the fourth quarter alone, the Bucs shot 93.8% from the free-throw line.

“Show me a kid tougher than Tianna Tarter,” said head coach Brittney Ezell. “She gets a broken nose and comes out with 22 points, eight rebounds, three assists, and two steals.  Show me a tougher kid than that. I was pleased with Erica. I thought she did some good things. I continue to be pleased with Alayjah. We didn’t shoot the ball well from the three-point line, but we did finish the game out strong in the fourth quarter 26-13 after a really forgettable third quarter. Anytime you can win on the road and overcome adversity, you’re always appreciative of it. I appreciate the effort and the kids kept fighting.”

It was a back and forth first quarter as the Bucs had a three-point lead. Freshman Alayjah Sherer led the Bucs with four points in the first quarter with her back to back layups. Erica Haynes-Overton then gave ETSU a six-point lead after she stole the ball and dribbled down the court for a layup. The Mountaineers fought back with three-pointers to keep them within three.

Sherer kicked things off for the Bucs with a three-pointer heading into the second quarter. Points went back and forth before Tianna Tarter starting heating up from the three-point line, nailing back to back three point shots. ETSU had an 11-point lead going into halftime with Tarter at 13 points and Alayjah Sherer at 10. Tarter and Raven Dean each had five rebounds to end the first half.

In the third quarter, Brittney Snowden gave the Bucs a ten-point lead after she hit her free throws, but the Mountaineers inched closer and closer. Appalachian State’s Lainey Gosnell hit her second three-pointer of the game to put them within three. Haynes-Overton worked around Mountaineer players to hit a layup to put the Bucs ahead. Armani Hampton tied the score 41-41 with a layup and free throw, but Raven Dean hit a three-pointer from the corner to put the Bucs back ahead.

Heading into the fourth quarter, the score was tied 44-44. Britney Snowden gave the Bucs a four-point lead after she hit both of her free throws and followed that performance with a layup. Tarter hit her fourth three-pointer of the game and Erica Haynes-Overton had a steal and then drove down the court for a quick layup to give ETSU a 53-46 lead, with just under seven minutes left to play.

The Mountaineers were able to get a layup before the Bucs got a nine-point lead after Tarter threw the ball down the court for Haynes-Overton to make a layup. Towards the end of the game, free throw shooting helped the Bucs maintain their lead. Tarter was fouled three times in a row and went 6-6 in the fourth quarter. A Mountaineer three finished off the scoring, but ETSU’s 13-point lead was too much.

The Bucs will get a day off before hosting Tennessee Tech on Friday, Nov. 17.  The game is set for 7:00 p.m. inside Brooks Gym.