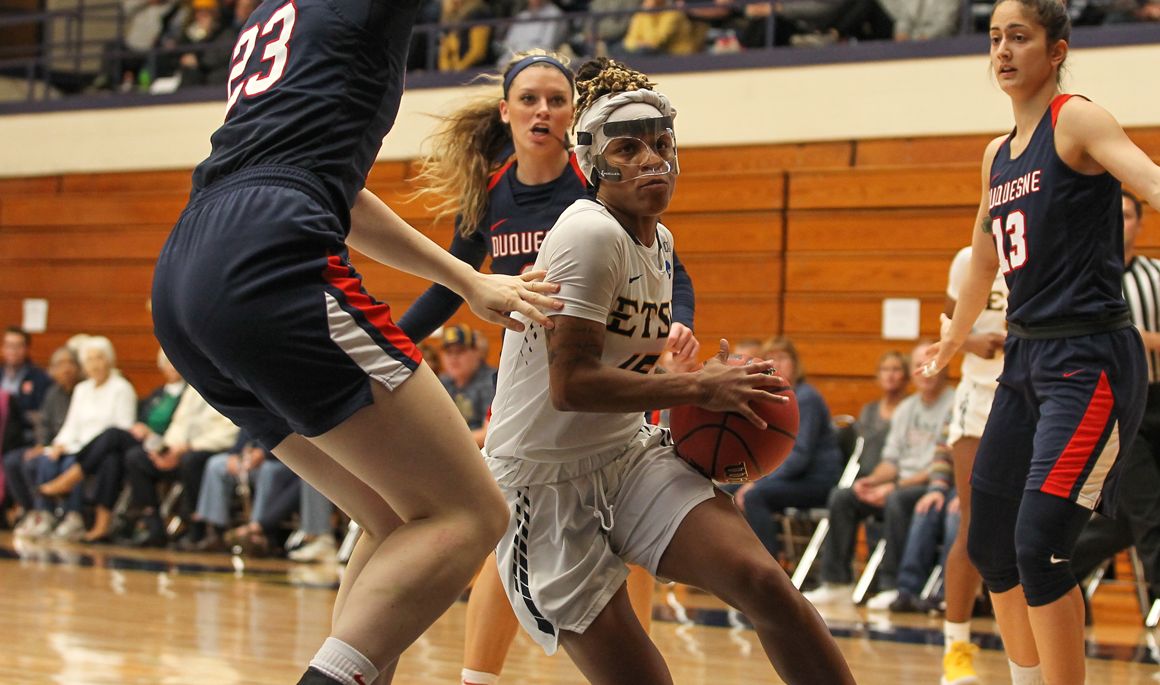 Tarter led the Bucs with 28 points

“Obviously, you’re never pleased with a loss,” said head coach Brittney Ezell. “I think it’s the competitive nature of all of us. I thought we showed a little bit of glimpses of things yet to come and to jump on them so early. We jumped out to an 11-0 start, but we just didn’t keep our foot on the gas. We got in foul trouble. We didn’t finish from the free throw line. We didn’t make some layups and those are some things that are going to come for a young team in time, with some toughness and a little bit more experience.”

The Bucs started strong and took an 11-0 lead. Washington State did not score until 4:45 left in the first quarter. The Cougars fought their way back and got within three of the Bucs, but Washington State then hit a three-pointer to tie the game at 18.

Tianna Tarter fed Brittney Snowden (Pensacola, Fla.) a beautiful pass for a layup, to put the Bucs back on top, but Washington State had two back to back hoops to take their first lead of the game with 8:15 remaining in the half. The Cougars then took a six-point lead, but free throws and a layup by Tarter put the Bucs within three to make the score 37-34.

Erica Haynes-Overton (Nashville, Tenn.) started the second half strong with six points to put the Bucs within one of the Cougars 43-42. Tarter then followed Haynes-Overton’s performance and was able to get a layup to give ETSU their first lead since the start of the game. Washington State did not let down as they went on a 10-0 run and maintained a nine-point lead. Snowden stopped their run with a free throw and from there the Cougars did not make a field goal for two and a half minutes of play. Tarter’s dominant performance came in the end of the third quarter when she went on 6-0 run to tie the game 56-56. She nailed two three-pointers in a row, the last one being at the buzzer.

Washington State began the fourth quarter with back to back layups to take back their lead. Haynes-Overton went on a 3-0 run to put the Bucs within one at 60-59, but the Cougars built a five-point lead as they hit all four of their field goals. Tarter then shined again after knocking down a three-point shot and being fouled on the play to pick up four points in a matter of seconds with the Bucs trailing by four.

Raven Dean (Charlotte, N.C.) made a tremendous pass to Britney Snowden and she made a layup to put the Bucs within four with ten minutes left to play. For the next four minutes, the Cougars were held scoreless. With 18.8 seconds left, the Bucs were down by five after putting the Cougars on the free throw line. Shy Copney (Johnson City, Tenn.) hit a crucial three-pointer for the Bucs to make the score 78-76. With 7.9 seconds on the clock, ETSU fouled Washington State in attempt to get the ball back. The Cougars made both free throws and the Bucs were unable to get the ball down the court.

“This was just game seven, but we’ll need our kids to get a little tougher. Obviously Washington State has size that we’re not accustomed to and it’s been back to back nights where we’ve really been out-sized, but I was pleased with our fight. I was pleased with our effort and I think we’ll keep getting better from this and learn from it and play a really good Western Michigan team tomorrow,” concluded Ezell.

With the loss, the Bucs move to 4-3 and Washington State picked up their second win of the season. ETSU will play Western Michigan tomorrow at 11:00 a.m. to conclude the Gulf Coast Showcase.