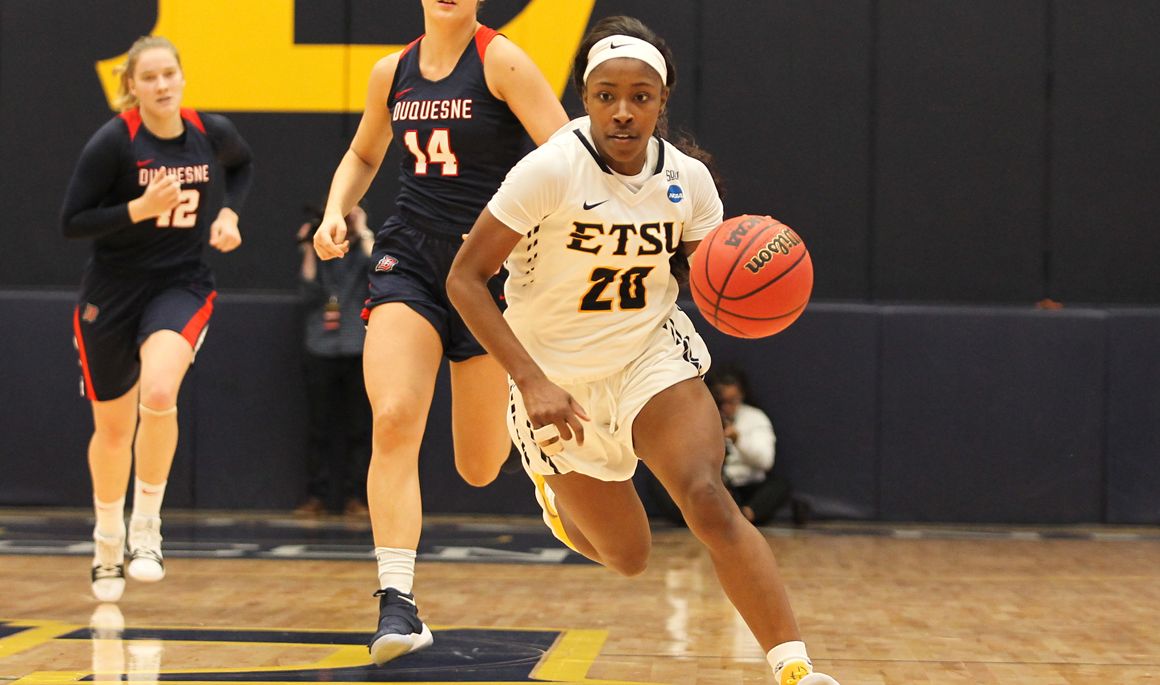 MURRAY, Ky. (Nov. 29, 2017) – ETSU’s women’s basketball retuned to the win column in emphatic fashion Wednesday night, setting a season high in points and getting a history-making performance in a 96-68 over Murray State in a non-conference game at the CFSB Center in Murray, Ky.

Haynes-Overton’s 11 steals eclipsed the old mark of nine set by Kiya Verdell against Appalachian State in 2003 and matched by Nicelle Akers against Campbell in 2006.

The Bucs (5-4) trailed for a total of only 20 seconds in snapping a three-game skid, and surpassed their previous season high of 87 points – set against Cincinnati on November 10 – with more than four minutes left in the game.

“I’m beyond proud of the collective effort in tonight’s win,” said head coach Brittney Ezell.  “Our kids showed remarkable toughness to compete and perform at such a high level after a long road trip in Florida for Thanksgiving. We played unselfishly and with a lot of confidence tonight. We had a lot of incredible individual performances, but all within the framework of the team, which is another testament to our team chemistry. Road wins are difficult to get, so we’re thrilled to have this one and head home to Johnson City.”

The Bucs scored 26 points in the first ten minutes, matching their highest total in a quarter this season. Graduate transfer Shy Copney (Johnson City, Tenn.) came off the bench spark the outburst, scoring 12 points on 4-5 shooting, including 3-4 from three-point range. Her 3-pointer with 5:27 left in the quarter put the Bucs ahead 10-8 and in the lead to stay, and her four-point play with :04 remaining pushed the ETSU advantage to 26-17.

The Bucs would lead by no fewer than 11 points the rest of the night. The Bucs pushed their advantage to 20 points late in the 3rd quarter, and would go on to lead by as many 32 points.

ETSU outrebounded the Racers 58-42 and held a commanding 27-11 advantage in points off turnovers.

“We’d like to send congratulations to our men’s basketball team and coaching staff on their win at Fordham,” Ezell said, “and we want to send all the best of luck to our volleyball team and their staff as they start the NCAA tournament at Kentucky this weekend.”

The Bucs continue their season-long seven-game road trip with a visit to Winthrop University on Sunday, December 3. Tip-off is at 2:00 pm.