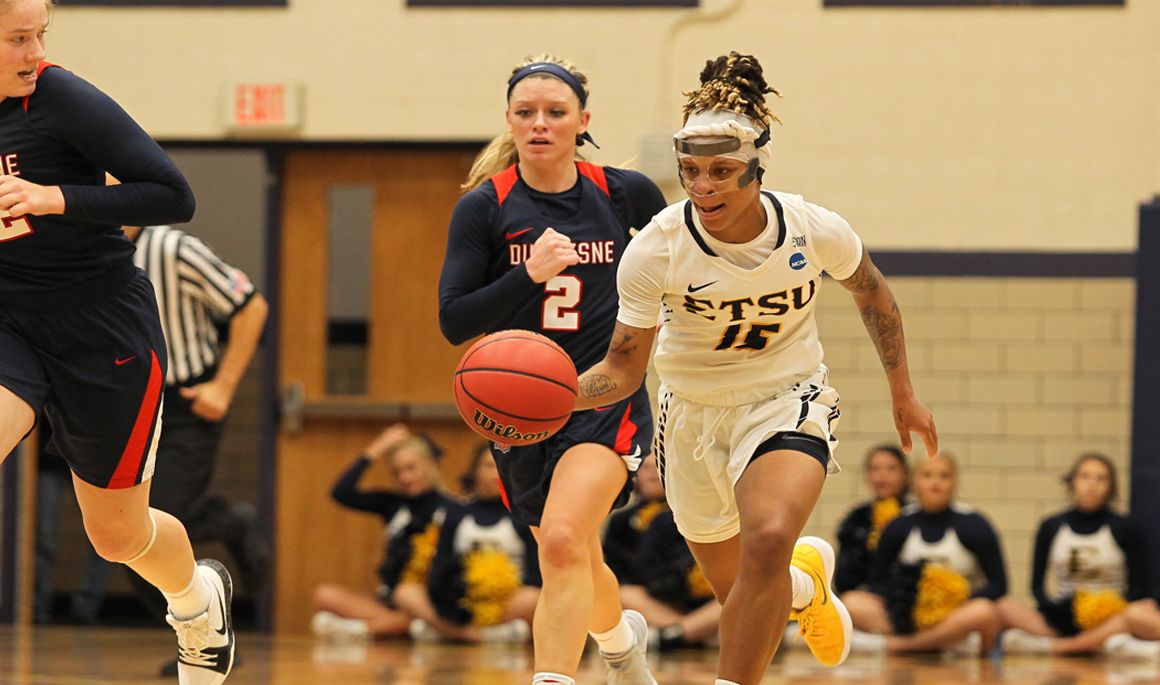 Bucs finish with 47 rebounds and 21 steals

ROCK HILL, S.C. (Dec. 3, 2017) – Forcing a season-high 30 turnovers, the ETSU women’s basketball team paced past the Winthrop Eagles in a 74-63 win on Sunday afternoon in Rock Hill, S.C. in a non-conference matchup.

“Anytime you can get a road win, you are thrilled,” said head coach Brittney Ezell. “Our team battled some adversity on this trip with travel issues and injuries, but still found a way to win which is a great sign of toughness. Tianna was remarkably good on the defensive end today and dialed in to passing lanes.”

Senior Tianna Tarter (Johnson City, Tenn.) had a fantastic day recording her 13th double-double of her career after finishing with 16 points and 11 steals. Her 11 steals tied the new single-game record that Erica Haynes-Overton (Nashville, Tenn.) just set this past Wednesday at Murray State.

Erica Haynes-Overton finished with 16 points, four rebounds and four steals. Haynes-Overton also went 5-5 from the free throw line. Down in the post, Sadasia Tipps (Hickory, N.C.) recorded eight points and seven rebounds, which all came from the offensive side.  Brittney Snowden finished with eight rebounds and six points and Anajae Stephney (Knoxville, Tenn.) had five rebounds.

“I thought Britney, Sadasia and AJ did some really good things on the low post for us and it was another good night for Erica, once she recovered from foul trouble,” added Ezell.

The Bucs (6-4) jumped out early going on a 10-0 run to begin the game. Jada Craig (Winston-Salem, N.C.) earned her second career start. During the first quarter, Shy Copney (Johnson City, Tenn.) nailed her 20th three-pointer of the year. ETSU kept Winthrop scoreless for three minutes after forcing 12 turnovers. The Bucs forced three turnovers in the first three possessions. The Eagles’ Emily Kelley then hit back to back threes to end the quarter, but ETSU held a 21-12 advantage.

Malloree Schurr (Montgomery, Texas) gave the Bucs a 25-12 lead after hitting a jumper to begin the second quarter. Her basket would be the start to an ETSU 6-0 run, but Winthrop hit three field goals in a row to keep them close. At the half the score sat at 35-27. ETSU led by as many as 13 points in the first half and held a 21-14 advantage in rebounds. Tarter had eight of ETSU’s 12 steals to finish out the half.

Raven Dean (Charlotte, N.C.) started things off for the Bucs to begin the second half, which led to an 8-0 run. Dean finished the game with 12 points before suffering an injury. Following their run, ETSU had a four-minute scoring drought, but was ended when Tarter picked up her 10th steal of the game and Sadasia Tipps put up a layup. Copney then hit her 21st three-pointer of the year to give ETSU a 14-point lead.

ETSU continued to stay dominant in the fourth quarter as Tarter got things going with a three pointer. Winthrop would not let down as they went on a 6-0 run and kept the Bucs scoreless for just over two minutes. Erica Haynes-Overton’s jumper and free throw put the Bucs up by ten and they kept Winthrop scoreless for two minutes. During the fourth quarter, Tianna Tarter picked up her 11th steal of game and the Bucs hit their last three shots to maintain their lead and capture their sixth win of the season.

ETSU improves to 6-4 and 3-1 on the road. ETSU will continue their road stretch when they travel to Texas to take on the University of Houston, Dec. 10 at 3:00 p.m. (ET) “We will head home tonight, rest, recover and prepare for our next test at Houston next weekend for Malloree’s homecoming game,” concluded Ezell.