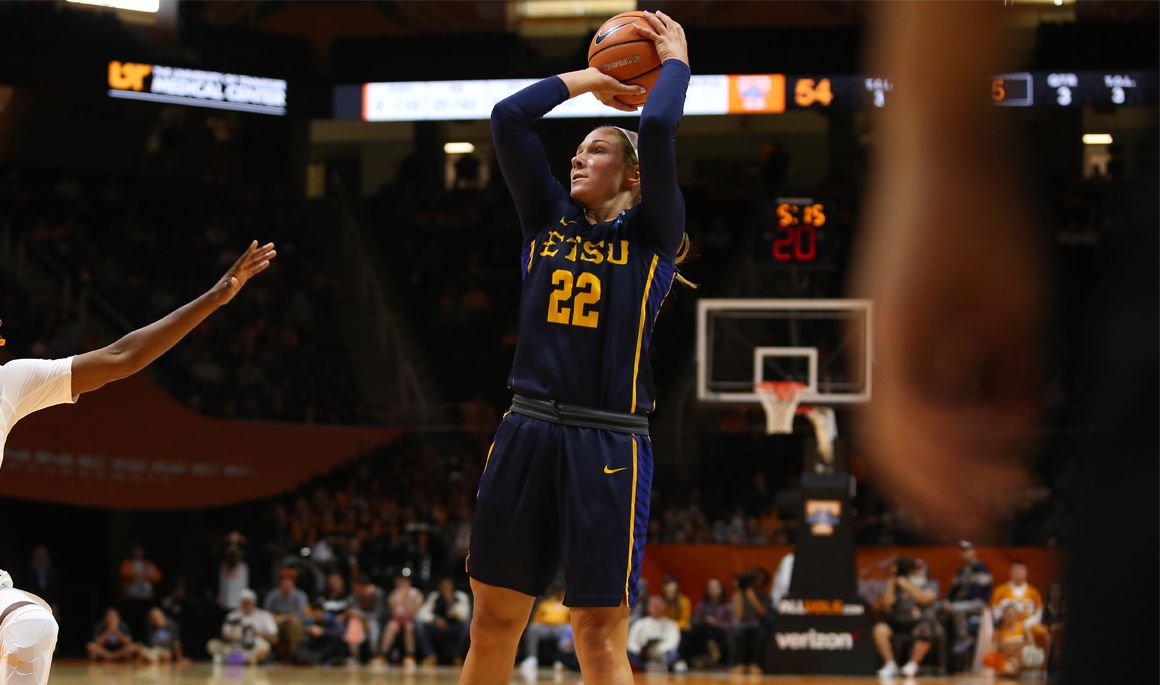 Tarter leads the Bucs with 19 points

“I thought we showed some resiliency on the road in a difficult set of circumstances,” said head coach Brittney Ezell. “I don’t necessarily think we played our best basketball today, but I do appreciate our effort. I do appreciate when things weren’t going well, we continued to try to fight. Sometimes it turns into a quicksand moment, the harder you try to get out, the deeper you sink. I think that happened to an extent.”

Tianna Tarter (Johnson City, Tenn.) led the Bucs with 19 points, while Shy Copney (Johnson City, Tenn.) finished with 12 and Erica Haynes-Overton (Nashville, Tenn.) had 10. Despite the loss, the Bucs forced 24 turnovers and had eight steals. Malloree Schurr (Montgomery, Texas) led ETSU with seven rebounds and went a perfect 100% from the free throw line. The Bucs finished with a 65% free throw percentage.

Houston started the game with a three to set the tone. Tianna Tarter gave the Bucs’ their first points of the game, followed by Erica Haynes-Overton who picked up a steal to drive down the court for a layup. In front of many hometown friends, Malloree Schurr put the Bucs within four with a quick jumper, but Houston was relentless. The Cougars went on a 6-0 run to control a nine-point lead at the end of the first quarter.

Hometown native Malloree Schurr enjoyed playing in front of so many fans. “Honestly there are no words, said Schurr. “The love and support I have here is unparalleled and it felt great to be able to see everyone. Playing in front of my friends and family remind me that so many people helped me along the way and it was amazing to have the opportunity to play for them again.”

Houston kept their momentum going and went on an 8-0 run before Malloree Schurr ended it with another jumper. Shy Copney hit back to back threes for the Bucs, followed by ETSU’s third straight three-pointer by Tianna Tarter to end the half 46-31.

A Houston three started the third quarter, but Britney Snowden (Pensacola, Fla.) had a snazzy spin and layup move. The Bucs went on a scoring drought as Houston went on another 8-0 run. Tianna Tarter got the Bucs back in charge after driving down the court for a layup. With a very slow game full of fouls, Anajae Stephney (Knoxville, Tenn.) and Haynes-Overton combined for four points in free throws. Britney Snowden also picked up four points after heading to the line twice.

In the fourth quarter Houston was unable to make any field goals for seven minutes as the Bucs forced three turnovers. Their only points came from free throws. Copney hit her fourth three-pointer of the game. ETSU went on a 7-0 run towards the end of the game, but Houston came away with the 88-69 win.

ETSU will play their seventh straight game on the road when they take on NC State on Thursday, Dec. 14 with a tip-off time set for 7:00 p.m.

“I was pleased with a handful of individual efforts. I think if some things had gone better in the early stages of the game, we could have had an opportunity to compete towards the end. Houston, hats off to them. They played physical and aggressive. It just wasn’t the kind of game that was conducive to us performing at our best. No rest for the weary. We will reevaluate it tonight, start looking at NC State tonight and get ready for two big games. We play NC State on the road and then we welcome Michigan State on Saturday. We told our kids let it be what it is and go study for your exams and we’ll be home in Johnson City tomorrow,” concluded Ezell.