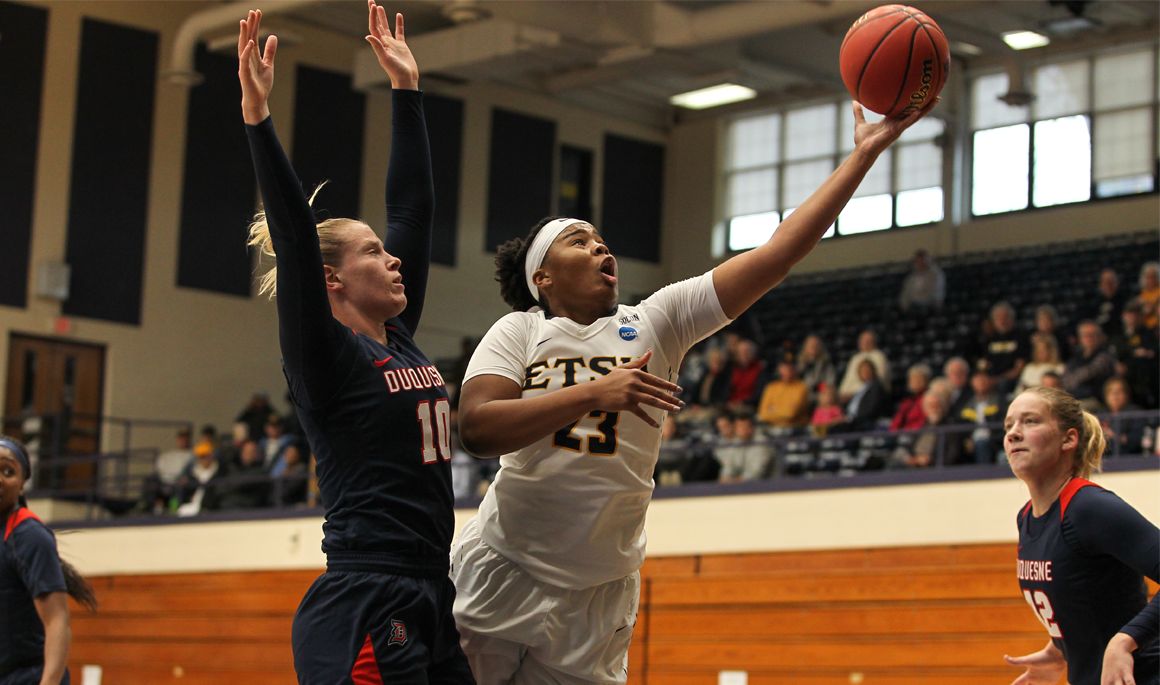 RALEIGH, N.C. (Dec. 14, 2017) – Three Buccaneers scored in double figures as the Bucs battled, but came up short against NC State inside Reynolds Coliseum on Thursday evening. After being down by 21 points, ETSU’s tenacious defense brought them within four. ETSU out-rebounded the Wolfpack and finished with a 70% free throw percentage.

“Disappointed obviously to not be able to pull that out in the second half,” said head coach Brittney Ezell.  “We played a tremendous second half, a really inspired second half. A lot of good things to build on. I was thrilled with Jada Craig (Winston-Salem, N.C.). Britney Snowden (Pensacola, Fla.) came on. I thought Anajae Stephney (Knoxville, Tenn.) did some great things, Sadasia Tipps (Hickory, N.C.) played well, Tianna Tarter (Johnson City, Tenn.) was her normal dependable self. We did enough good things to feel encouraged, but we did enough silly things that hurt us from winning the ball game.”

Junior Brittney Snowden and sophomore Jada Craig had a tremendous game for the Bucs. Snowden finished with 15 points, a new personal best since transferring to ETSU and Craig picked up a new career high of 14 points. Craig also went perfect in field goals and finished with a 75% free throw percentage.

The Bucs started off strong when Erica Haynes-Overton (Nashville, Tenn.) fed Tianna Tarter a beautiful pass through the lane for Tarter to score the first points of the game.  NC State got in their rhythm and went on a 14-2 run. Tarter kept the Bucs alive with a left handed flip layup and the Wolfpack went on a two minutes scoring drought to end the first quarter.

Both teams struggled to score at the start of the second quarter. Anajae Stephney started a 6-0 run for the Bucs after driving to the hoop for a layup. NC State was scoreless after missing their last six field goals. Stephney hit three free throws in a row to end the half, but the Bucs trailed by 14.

Britney Snowden set the tone for the Bucs in the second half after she went up for a layup, was fouled and made the free throw. ETSU kept NC State scoreless before going on a 5-0 run. ETSU was on a roll after Shy Copney (Johnson City, Tenn.) swished a three-pointer to put the Bucs within nine. Haynes-Overton powered down the court for a layup, but the Wolfpack continued to hold their lead. Jada Craig answered for the Bucs with a three to keep the Bucs as close as ten and the Wolfpack was unable to make any field goals for the rest of the quarter. With the clock winding down, Britney Snowden posted up for a layup at the buzzer.

After a strong third quarter, Snowden continued to shine for the Bucs as she hit both free throws, followed by Craig who nailed her second three-pointer. Craig and Tarter had back to back layups to put ETSU within four. From there, both teams battled back and forth and traded off points, but the Wolfpack controlled their lead. A 6-0 run by NC State in free throws gave the Wolfpack a strong advantage to end the game 70-58.

Tarter finished with 12 points and eight rebounds, while Tipps had the team high of nine rebounds.

The Bucs will return home to host Michigan State on Saturday, Dec. 16 after playing seven straight games on the road.  Saturday’s game will be a special Gold Out inside Brooks Gym.

“I feel encouraged going into the Michigan State game. I know the kids feel encouraged going into the Michigan State game. We came into a difficult environment in one of the most historic places to play in women’s basketball and put on that kind of performance. I can’t say how proud I am, but I’m not happy with a loss. It’s okay to be proud, but not happy. What we really need is our gym to be packed on Saturday night when these young women come back, because they deserve it. They’ve earned a lot of respect nationwide. They’ve earned a lot of admiration and we need our fans to show up in droves. Wear gold and come help us beat Michigan State, because we’ve got a really good chance. We’re really excited about it,” concluded Ezell.