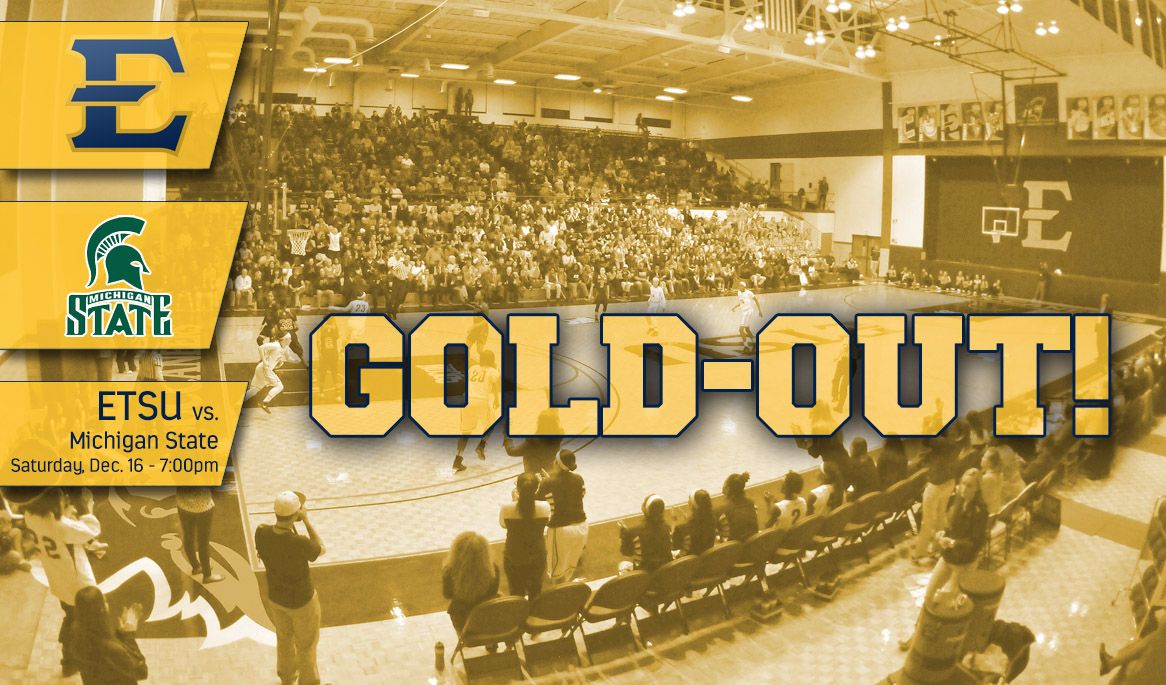 JOHNSON CITY, Tenn. (Dec. 15, 2017) – After a strenuous, seven-game road swing, the ETSU women’s basketball team will return to the friendly confines of Brooks Gym Saturday, Dec. 16 for its “Gold Out” game vs. Michigan State at 7 p.m.

For the “Gold Out,” fans are encouraged to wear their favorite ETSU gold apparel as the Bucs look to fill #BrooksToTheBrim with a sea of gold.

ETSU has played away from Johnson City in nine of its 12 games so far and have not hosted a game in Brooks Gym since Duquesne came to town November 19 of this year.

Home-court advantage has been a plus in close games so far this year, as ETSU is a perfect 3-0 inside Brooks, including an 87-77 season-opening win over Cincinnati and an 81-77 thriller over Duquesne. The Bucs also took down Tennessee Tech Nov. 17, 74-55.

ETSU is coming off of a 70-58 loss at NC State. After trailing by 21, the Bucs fought back and got within four of the Wolfpack. Britney Snowden (Pensacola, Fla.) shined in the post, scoring a team-high of 15 points.  Jada Craig (Winston-Salem, N.C.) scored 14 points for the Bucs after coming off the bench and went 3-3 in field goals and 2-2 in three-pointers. With their speed and agility, both Tianna Tarter (Johnson City, Tenn.) and Erica Haynes-Overton (Nashville, Tenn.) lead the Bucs in points, steals and assists. The dynamic duo has been unstoppable all season as both players each rank in the top ten nationally in steals. Senior Malloree Schurr (Montgomery, Texas) has helped the Bucs with her scrappiness and has only missed two free throws all season. Forwards Anajae Stephney (Knoxville, Tenn.) and Sadasia Tipps (Hickory, N.C.) have come off the bench to help the Bucs tremendously. Stephney is averaging 2.4 rebounds per game, while Tipps leads the team with ten blocks. After heating up from the three-point line in the home opener, Shy Copney (Johnson City, Tenn.) has been the Bucs’ go-to three-point shooter. Copney has eight three-pointers in Brooks Gym. Lastly, Alayjah Sherer (Tupelo, Miss.) has provided great depth for the Bucs, averaging 6.5 points per game and 4.3 rebounds per game. Since playing a tough road schedule, the Bucs are prepared for their next home contest.

Bucs in the Rankings

All ten Bucs have scored more than 20 total points so far this season.

Saturday’s contest will be the first-ever meeting between the Spartans and the Buccaneers.

The Spartans come into town off an 82-38 win over Rhode Island at home. Freshman forward Sidney Cooks will be the key player to watch for MSU, as she leads the team with 10.8 points per game. The second leading scorer, redshirt senior guard Branndais Agee, has started in five of eight games for the Spartans and reached the career 1,000 point milestone this season against UConn. Agee averages 10.1 PPG and will likely serve as the sixth-man. Redshirt sophomore point guard Shay Colley, who has started all eight games, will be another player to watch for MSU as she produces 8.8 PPG and recorded a season-high five steals last Saturday against Rhode Island.

Much like ETSU, Michigan State holds an undefeated record at home, going 5-0 in East Lansing. But on the road or in neutral sites, the Spartans are 1-3, including losses to two of the top three ranked teams in No. 1 UConn and No. 3 Notre Dame.

ETSU hosts Northern Kentucky next Friday, Dec. 22 at 2 p.m. inside Brooks Gym. This game will be part of a double-header with ETSU men’s basketball hosting Georgia Southern in Freedom Hall at 7 p.m. the same night.