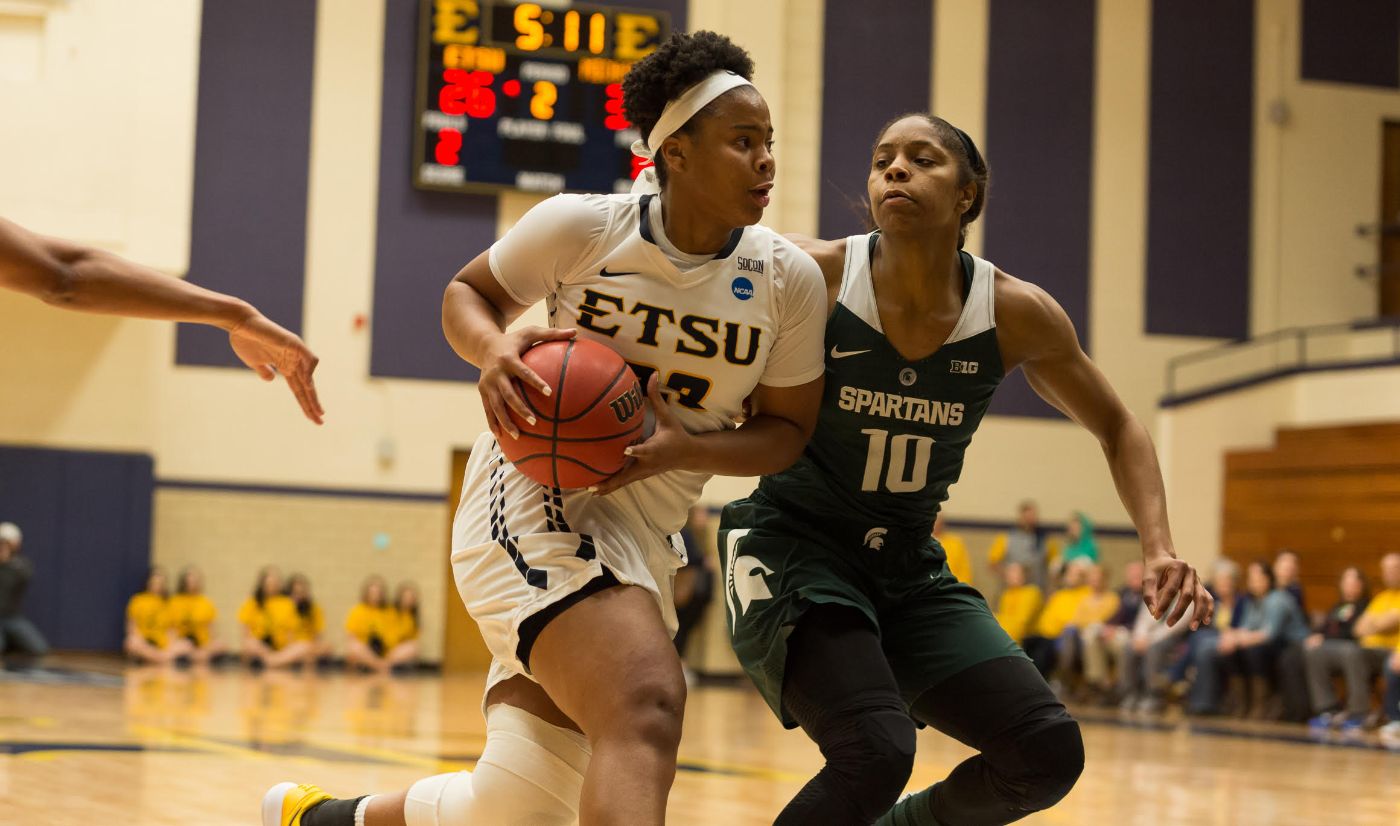 Snowden and Tarter lead Bucs with 16 points each

JOHNSON CITY, Tenn. (Dec. 16, 2017) – With 12 seconds remaining on the clock, Malloree Schurr (Montgomery, Texas) inbounded the ball to Tianna Tarter (Johnson City, Tenn.) at mid-court. Tarter dribbled at the top of the three-point line before driving to the hoop through a herd of Michigan State players and tossing up a shot with one second left on the clock. The shot hit the backboard and the rim before rolling out of the hoop and ETSU would head into their first overtime game since 2014.

“Unbelievable effort. I thought we were going to finish it. We were gassed in the overtime and we gave up 17 points in a five-minute overtime. One-three pointer that broke our back and then they hit a bunch of free throws. That was about as physical as a ball game that I’ve seen at my time at ETSU.”

On the last shot by Tianna… “It was as close as you can get without cashing in. We set a high ball screen with Shy knowing they couldn’t hop off of a shooter and got the ball where we wanted it. Tianna got a great cross over and into the paint. Normally she finishes those. It broke my heart for her because she wanted it badly. Our kids our tough. I don’t know anyone else in our league that schedules the way we do, the way we’ve been competing. We’ve been in every game and the next step for our program is getting over the hump. I thought it was going to happen tonight. We got a win over Cincinnati under our belt. We have a win over Duquesne. We’re getting there and it’s a process. It’d be easy for me to schedule easy, but I’m not going to do it.”

On ETSU’s press… “I think our press is effective. We’re so active on the front line. It’s relentless for 40 minutes. Our press has a gradual effect as well. If you noticed, their point guard was trying to get the ball out of her hand quickly. She didn’t want it anymore. Our press wears you out and we just have to stay with it for 45 minutes. We’re doing it with nine girls and a starter out. It’s amazing what these kids are doing and I hope the people that came to the game tonight see the effort that our kids put up. We really kept fighting the whole game. They’re fun to watch. They deserve crowds like that every game. They’re fun to watch and they’re even more fun to coach.”

On the height disadvantage… “We told them that hustle beats muscle when muscle doesn’t hustle. We did the same thing we did against NC State. We out-rebounded NC State. We held Michigan State to six offensive rebounds with their size. It’s just effort rebounding and I thought our kids did a phenomenal job on the glass tonight. There’s so many good things to take away. I’m really heartbroken for our kids. I’m heartbroken for our fans that wanted that ball to go in.”