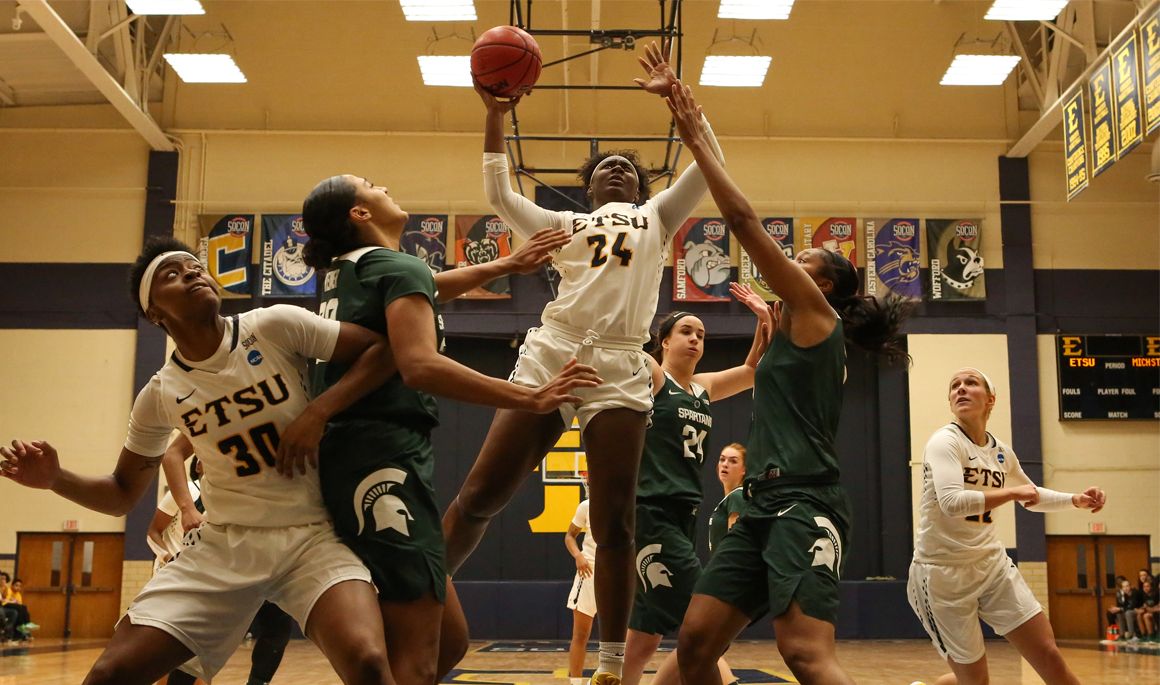 JOHNSON CITY, Tenn. (Dec. 21, 2017) – After playing in front of a packed crowd in a tough battle with Michigan State, the Bucs continue their six-game home stand when they face off against Northern Kentucky on Friday, Dec. 22. The game is set for 2:00 p.m., with the ETSU men’s basketball team squaring off against Georgia Southern inside Freedom Hall.

Fans are encouraged to wear their tackiest holiday sweaters to the game on Friday.

Tianna Tarter (Johnson City, Tenn.) and Erica Haynes-Overton (Nashville, Tenn.) continue to lead the Bucs in double figures with their aggressive full court press and steals. Both guards have set records in their steals and Tarter continues to move up in the ETSU records. Fellow guard Jada Craig (Winston-Salem, N.C.) has helped Tarter and Haynes-Overton in their full court press. Their quickness and agility makes them unstoppable. Forward Britney Snowden (Pensacola, Fla.) has been a huge help to the Bucs down low after averaging 6.1 rebounds per game, while putting up points offensively. Shy Copney (Johnson City, Tenn.) and Alayjah Sherer (Tupelo, Miss.) have added great depth to the Bucs after coming off the bench and able to put up points quickly. Copney has been a threat with her three-point shot as she has 27. Sadasia Tipps (Hickory, N.C.), Malloree Scurr (Montgomery, Texas), and Anajae Stephney (Knoxville, Tenn.) have been tremendous in the post and have played great defense in the paint.

Moving Up In the Rankings

Tianna Tarter has moved up to seventh in ETSU’s career scoring. She currently has 1,565 points and is just four points away from tying Shamauria Bridges with 1,569 points.

The Bucs will begin Southern Conference action on Jan. 4 when they host Western Carolina.

Tarter on the Watch Lists

All ten Bucs have scored more than 20 total points so far this season.

Friday’s meeting with Northern Kentucky will be the sixth in program history. Their latest meeting was in 2016 when the Bucs fell to the Norse 62-56.

Northern Kentucky comes to town with a 1-9 overall record. They had a blowout win of 103-25 against Oakland City University, but since then, they are on a five-game losing streak. The Norse just returned from Florida after playing back to back games on the 19th and 20th. Northern Kentucky returns Mikayla Terry and Taryn Taugher from their started lineup from last season. After redshirting last season, Molly Glick has been added to their starting lineup and is currently averaging double figures. Samari Mowbray is also averaging double figures and has a .500 field goal percentage. Glick and Mowbray are the Norse best three-point shooters, while Kailey Coffey has been an active rebounder.

The Bucs will enjoy the holidays with their families before returning to Brooks Gym to host North Greenville on Friday, Dec. 29. Tip-off is set for 6:00 p.m.