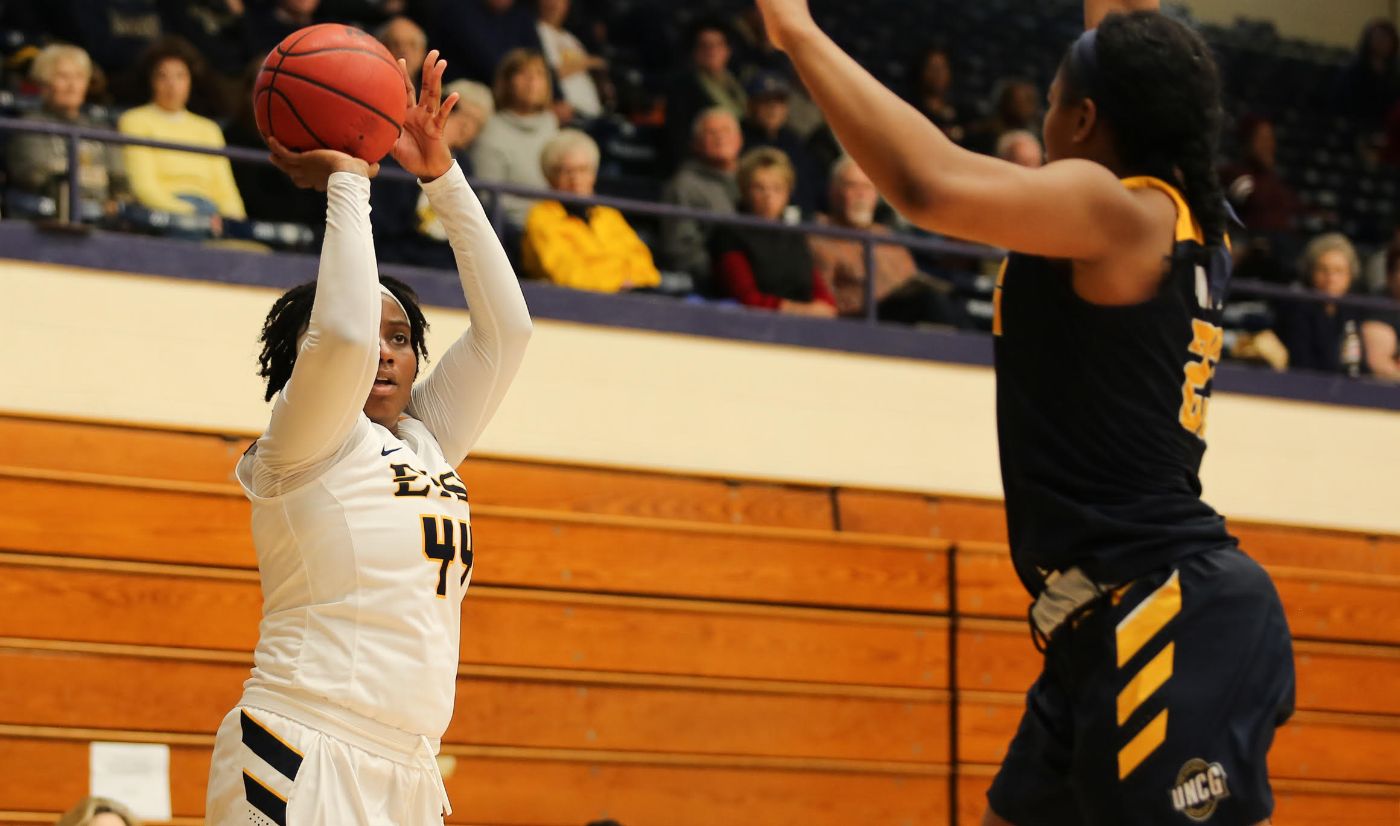 ETSU improves to 2-0 in conference play

JOHNSON CITY, Tenn. (Jan. 6, 2018) – Shy Copney (Johnson City, Tenn.) and Erica Haynes-Overton (Nashville, Tenn.) lifted the Bucs past UNCG on Saturday afternoon with a 60-52 win. ETSU is now 2-0 in conference play and one of three teams undefeated in the conference, alongside Mercer and Chattanooga. The Bucs also improved to 6-2 at home following a three-game win streak.

ETSU will host fellow conference rival Chattanooga next Friday, Jan. 12 at 7:00 p.m. Both teams meet undefeated in the conference as they each have two wins.

Opening statement from Head Coach Brittney Ezell… “I’m really proud of the way we grinded it out. I found this game to be very physical. The fouls didn’t reflect that. Our kids had to play though a lot of contact, but I think they prefer that considering our non-conference schedule had some very physical matchups. The non-conference schedule prepares us for games like this.”

On Erica getting a double-double and not being one of the tallest on the team... “She’s probably one of the most explosive players on the court, besides Tianna. Tianna doesn’t have as many opportunities to go up for offensive rebounds due to her point guard responsibilities. Erica has a nag for the ball. If you watch her on the offensive end, she tracks the ball really well. She does a great job of knowing where it’s going and then goes and gets it. She’s got a lot of intangibles that I can’t coach. If I could, I would give it to everyone out there. I’m very fortunate that we have her. We’re really trying to harness her talent and develop it in the way that really showcases all the things that she’s been blessed with. She’s helping our team win by doing anything that we ask.”

On Shy scoring 16 points… “Don’t sleep on Shy. She’s working hard. Shy, with the way she shoots it, has a chance to play after this year. She could go overseas and play with the way she shoots it so purely. What I’m most pleased about with her, is her five rebounds. They came at big times in the game. She got in amongst the trees and went up. She’s got a long wing span and big hands. She does a really good job defensively getting some hands on post passes. So 16 points, I really kind of expect that from her. She can shoot it. That three that she hit with about a minute to go was a dagger. I think it shows a lot of her and shows a lot from her teammates to give her the ball and call for her to shoot it. It takes some guts to step up and make a shot like that in a six/seven-point game at the end of the game.”

On pushing Tianna to shoot more… “Tianna is the most unselfish superstar you will ever encounter. She doesn’t like the limelight and she’s appreciative of it. She doesn’t seek it. She could dominant ball games from tip to buzzer and she chooses not to. Sometimes she does it to try to lift up her teammates. Sometimes it’s just the feel for her. I really try to relate to Tianna at a cerebral level and try to challenge her on a passionate level. Tianna is very smart. She understands the game, but she also has a huge heart. She has a heart for her teammates. She has a heart for the name across her chest. Reaching Tianna is not hard to do. When Tianna wants to turn it on, she’s just fine, but even Tianna at average is better than most people at their best.”

Erica Haynes-Overton… “Our goal is to come out hard and finish hard every game. We like to go head to head against other opponents. Our defense creates our offense, so that’s where we start. Our non-conference schedule prepared us for this.”

Shy Copney… “I thought we had a good team effort today. I thought everyone brought something to the table. A couple people got into foul trouble, but we continued to battle. We just had to step it up on defense because we gave up a lot of easy points. Our non-conference schedule definitely played a big part in today’s game. They were more of the size of the other teams we played. It was just like a rematch with any other team.”

On teams knowing she’s a threat from the three-point line… “I don’t think teams expect it anymore. I’m pretty sure they did in the beginning because of my size, but now every time in a game, they yell ‘shooter, shooter, shooter.’”