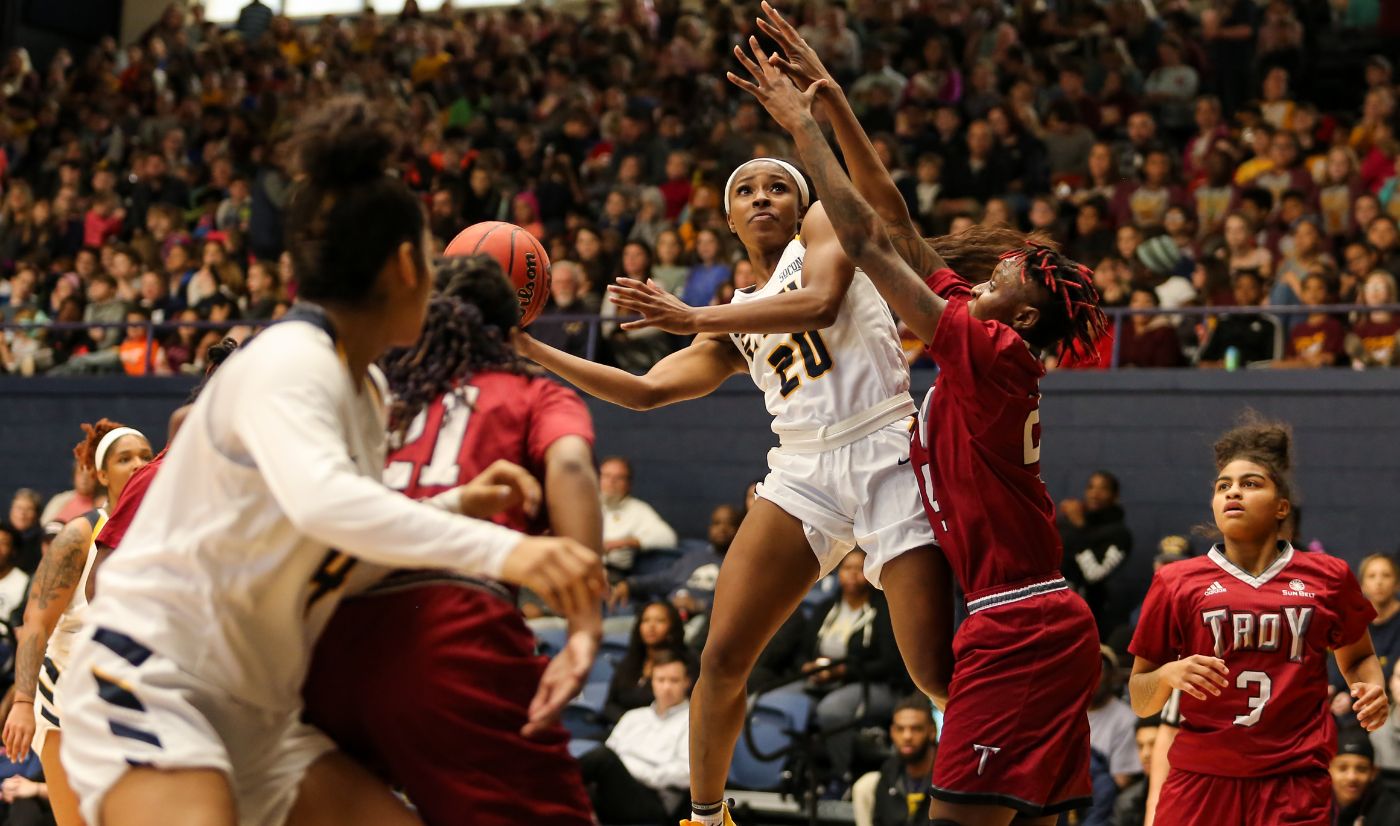 ETSU jumped out to a 5-0 lead after Haynes-Overton hit a jumper and a three. The Bucs kept Troy scoreless before they heated up from the three-point line, going on an 8-0 run to go ahead 16-9. A jumper by Haynes-Overton and two free throws by Upton helped ETSU pull within six at the end of the first quarter, as Haynes-Overton finished with nine points.

The Bucs outscored the Trojans 22-16 in the second quarter. Dean and Haynes-Overton had six points apiece, while both Tipps and Upton chipped in four points each. Raven Dean started a 6-0 run that sparked the Bucs’ offense to pull within two with the score sitting at 23-21. Points were traded back and forth before Dean’s layup tied the game at 27 with just under five minutes to go. With a minute remaining, Haynes-Overton went on a 4-0 scoring run to tie to the game at 35 at the half. The Bucs scored eight points off of turnovers and had 14 points in the paint.

Troy’s Kayla Robinson came out of the half scoring ten of their 22 points in the third quarter. The Trojans started the half with a three to take the lead, as the Bucs would trail for the remainder of the quarter. ETSU never backed down, outscoring the Trojans 12-8 in the paint. Haynes-Overton finished the first three quarters with a team-high of 19 points.

ETSU rallied and made a 12-3 run to pull within two of the Trojans to begin the final quarter of action. Britney Snowden (Pensacola, Fla.), Haynes-Overton, Dean, and Upton all contributed to the Bucs’ comeback. Once again, ETSU outscored the Trojans in the paint 10-4, but a 19-3 run to end the game would secure Troy’s 84-66 win.

“All they’re going to hear from us is my belief in who they are, where we have to be in March and what we have to do to get there,” said head coach Brittney Ezell.” Right now we’re experiencing heavy growing pain and that’s okay. It’s hard because we have several kids who are trying to step up and fill the void. We don’t have a singular player who can do that quite yet. You’re trying to fill a void from a four-year starting senior with sophomores or kids that weren’t expecting to carry the burden. We have to do it by committing right now and that’s where we are.”

ETSU will travel to Vancouver, British Columbia to compete in the Vancouver Showcase. The Bucs open with South Carolina on Thursday, Nov. 22 at 9:00 p.m. (ET)