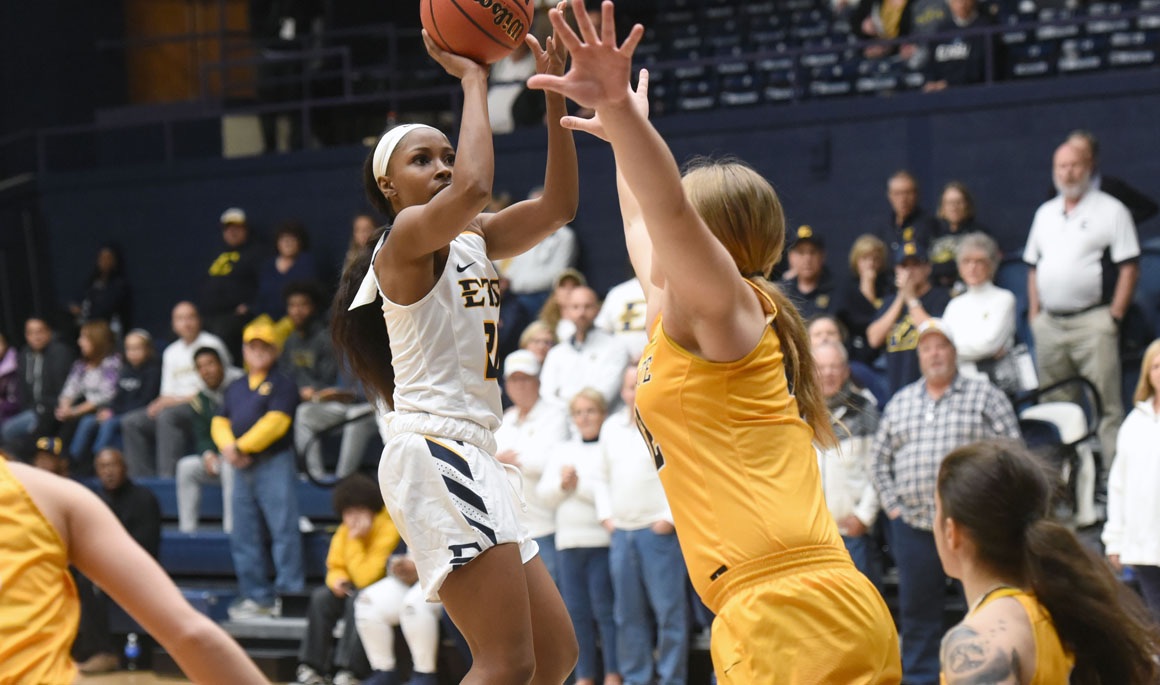 Coming off its longest road swing of the season, the ETSU women’s basketball team found its first win of the year, as the Bucs cruised to a 95-64 victory over rival Appalachian State on Thursday night.

The Bucs, who capped off a road trip that featured three games in three days in Vancouver and one to Mobile, Ala. on Monday night, opened their three-game homestand with a convincing victory courtesy of a career effort by sophomore guard Erica Haynes-Overton (Nashville, Tenn.). The reigning Southern Conference Freshman of the Year poured in a career-high 35 points, while also adding six assists and six steals in 36 minutes of action. Haynes-Overton’s previous career scoring effort was 29 points versus North Greenville last Dec. 29, while it’s also the most by a Buccaneer player since former teammate Tianna Tarter (Johnson City, Tenn.) netted a career-high 39 points back on March 2, 2017 against Samford in the SoCon quarterfinals.

“I thought Erica Haynes-Overton played one of the four best games that’s taken place in this building since I’ve been here. Her stat line was incredible,” said head coach Brittney Ezell.

Senior Britney Snowden (Pensacola, Fla.) collected her first double-double of the season and second of her ETSU career as she finished with 12 points and 10 rebounds, while graduate post Lexus Spears (Jacksonville, Fla.) added a spark off the bench by totaling a season-high 15 points (7-of-8 shooting) and eight rebounds.

“I think it makes Erica and Kaia’s job a lot easier,” said Ezell in regards to Snowden and Spears combining for 27 points on 12-of-17 shooting. “I thought we got off some three’s a lot more smoothly when we worked inside out and not vice-versa. Anybody will tell you that (the paint) is where basketball is built. Our post players finished around the rim today.”

As a team, the Blue and Gold shot a season-best 56 percent from the field (41-73), while tallying 58 points in the paint, 29 points off 18 forced turnovers and 26 fast-break points. The Bucs never trailed in the contest and score their most points in a game since netting 96 in the win at Murray State – exactly one year ago tonight.

With the win, ETSU snapped its eight-game losing skid and moved to 1-8 on the season, while Appalachian State – who had won four straight entering the game – moved to 4-3.

Appalachian State was led by Madi Story as she finished with a team-high 20 points.

Following the win, Coach Ezell talked about ETSU finally getting the monkey of its back.

“It’s one of those things where you’ve been pulling for the kids to put it all together, and it almost feels like they got a monkey off their back at this point,” said Ezell. “It was a matter of time — they are too good and too talented.”

The Bucs got off to a quick start as the Blue and Gold hit five of their first 10 shots and took a 10-3 lead into the first media timeout at the 4:49 mark of the first quarter.

The Mountaineers worked their way back into the game following the media break, pulling within one at 12-11 with 3:18 to go. ETSU would not let Appalachian State guard Madi Story’s three-pointer go unanswered, taking a commanding 28-15 lead powered by a 16-4 run to end the quarter.

ETSU opened the quarter with a Snowden layup on its first possession, but Appalachian State chipped away at the deficit following that basket, pulling within single digits at 38-29 with just under 3:00 remaining until the intermission.

The Bucs took over in the closing moments of the half, going on a 8-0 run sparked by a three-pointer from Taisha Murphy (Clayton, N.C.), a pair of buckets from Haynes-Overton and two free-throws from Snowden. ETSU took a 46-29 lead into the break and would not look back.

The Bucs doubled up their halftime lead by outscoring the Mountaineers 31-14 in the third stanza en route to taking a 77-43 lead into the fourth.

ETSU made 10 straight field goals and mounted a 17-0 run in the frame to take its commanding lead. The Buccaneer defense held Appalachian State scoreless for over three minutes during that run in which six different ETSU players scored during the blitzkrieg. As a unit, the Blue and Gold went 15-of-18 from the field in the quarter, while limiting the Mountaineers to 5-of-18 shooting.

“The team came out with the same intensity as they did in the first half, and I was pleased with our level of discipline,” added Ezell. “We showed some growth and showed some maturity…we focused on getting the ball in the paint and doing what we do well. The kids bought in and did a good job in the third quarter.”

ETSU eventually saw its lead balloon to a game-high 37 points following Spears’ final lay-up on the night, which made it an 89-52 score with 3:03 remaining in the game. Spears was one of five players to record a field goal in the fourth quarter.

The Bucs continue their homestand this Saturday when ETSU hosts Houston at 2 p.m. inside Brooks Gym.