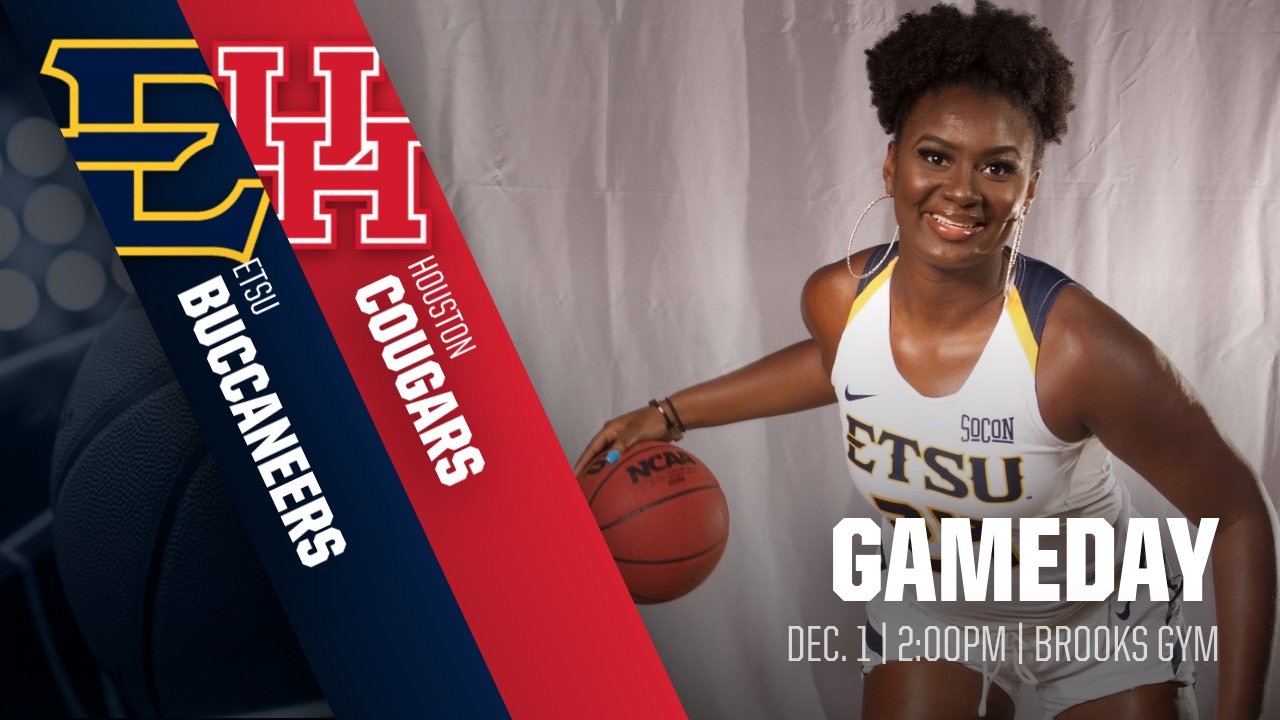 Saturday’s game will be Youth Day, as children ages 12 and under get into the game for free with a paying adult. For tickets, please call the ETSU ticket office at 423-439-3878 or click here to purchase them online.

The Bucs, who have played seven of their first nine games away from home, are looking to build off its first win of the season. ETSU defeated traditional rival Appalachian State 95-64 Thursday night to enter the win column.

ETSU has played a demanding schedule in the early stages of non-conference play as the Blue and Gold have faced 2017 NCAA national champion South Carolina, Big Ten foes Michigan State and Rutgers and American Athletic Conference contender Cincinnati. Houston is also a member of the American, earning a third place preseason ranking in the conference’s coaches’ poll.

The Bucs’ first nine opponents this season have a combined winning percentage over .600.

The Blue and Gold are led by sophomore and reigning Southern Conference Freshman of the Year guard Erica Haynes-Overton (Nashville, Tenn.) as she leads the team in scoring (18.8 ppg), field goals made (69), steals (38), assists (26), free throw percentage (79%) and minutes (31.0).

Last night against the Mountaineers, Haynes-Overton scored a career-high 35 points while adding six steals and six assists to cap off a career night. Her 35 point game ranks 13th in the nation for individual single game scoring. The sohpomore’s previous season high in points was 25 against South Alabama, and her previous career high was 29 last season against North Greenville.

Snowden and graduate post player Lexus Spears (Jacksonville, Fla.) each had strong performances for the Bucs against Appalachian State, as Snowden posted her first double-double of 2018 and the second of her ETSU career with 12 points and 10 rebounds, while Spears added 15 points and eight boards off the bench.

Houston enters Saturday’s contest with a 3-5 overall record, with two of its three wins coming on the road against Incarnate Word and Columbia.

The Cougars have fallen in their last two games, losing a double-overtime thriller to New Mexico at home, 89-84, and a 76-71 loss at Florida Gulf Coast that saw a late, double-digit comeback attempt fall short in the closing moments.

Junior guard Jasmyne Harris is the offensive catalyst for Houston, averging an even 19.0 points per contest. Harris also leads the Cougars in field goals (55) three-point baskets (20) and assists (29). Fellow junior guard Angela Harris poses an outside threat with 11.9 points per game and a 32.1 three-point percentage (17-53). Redshirt sophomore forward Alyssa Okoene averages nearly a double-double at 10.5 points per game and 8.1 rebounds — the team high.

With three overtime games this season, two of which ended in double OT, the Cougars are averaging 79.5 points per game to rank second in the American. On the flip side, Houston ranks last in scoring defense at 78.8 points allowed on average.

Defensively, the Cougars rank second in the conference in total blocks (34) and blocks per game (4.3). Also, much like ETSU, Houston leads its conference in steals by a wide-margin at 106 total and 13.3 steals per game. East Carolina is the second closest in the AAC to Houston in steals at 71 total and 11.8 per game.

Saturday marks only the third meeting between the two programs.

In last year’s game, ETSU was held to 31.8 percent from the floor while Houston shot 47.5 percent. Former Buc Tianna Tarter scored a team-high 19 points for ETSU while Erica Haynes-Overton scored 10 with six rebounds. Current Houston guard Jasmyne Harris led her team with 28 points in the game.

Saturday’s game will be broadcast live on ESPN+ with Kasey Marler and Bruce Tranbarger on the call; Click here for live video

Mike Gallgaher will have the radio call on WXSM-AM 640 starting with the Atmos Energy Pregame Show at 1:30 p.m.; Click here for live audio

Live Stats will also be provided via StatBroadcast by visiting ETSUBucs.com; Click here for live stats

The Bucs close a three game home stand at Brooks Gym Tuesday, Dec. 4 against Liberty at 7 p.m. Tuesday’s contest will be Faculty/Staff night.