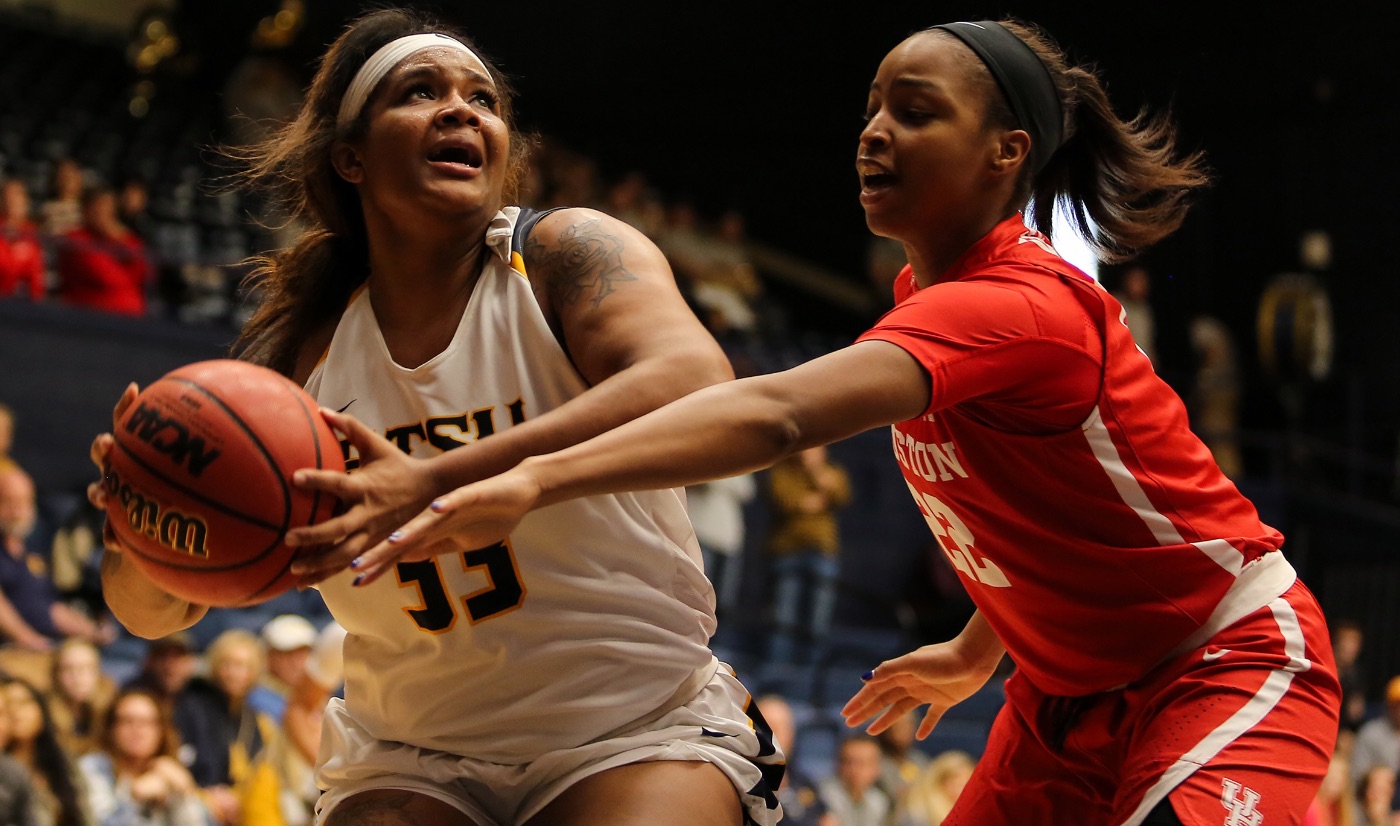 Falling behind in the second quarter, the Bucs played from behind most of the game but continued to keep the pressure on Houston. The Cougars, who were picked third in the American behind UConn and South Florida, allowed ETSU to tie the score on two occasions after a third quarter surge but eventually held off the Bucs for the road win.

“What I told the kids after the game is that if you watched us from the beginning of the season until now, the improvement is remarkable,” said ETSU head coach Brittney Ezell. “Our schedule is unforgiving. Early in the season, we might have dropped that game by 20. The fight in these kids is unrelenting, and I admire that. They want to learn, they want to stretch and they want to grow…they want the competition. When you embrace the competition, that’s how you grow.”

The Cougars opened quickly with a couple of baskets, but ETSU answered in the next couple of minutes to tie the game at 6-6. The Bucs would then leverage home court advantage, going on an 11-0 run that spanned nearly four minutes. Houston would find an 8-0 run powered by a couple of fast-break plays, but a couple of free throws and a trey off the bench by redshirt-junior Carley Lytton (Floyd, Va.) in the closing moments of the quarter kept ETSU ahead, 22-17. Spreading the wealth, the Bucs had four players with at least four points, led by freshman Kaia Upton (Nashville) with six points.

The Cougars would close the gap early in the second quarter, regaining the lead with a thee-point basket to make it 27-24 with 8:15 remaining in the half. Houston continued to build the lead after that with 14 points off turnovers and 10 second chance points in the quarter. Spears kept things close for ETSU, never letting Houston pull away too far with four baskets in a row for ETSU. Houston took an eight point lead into the half, 46-38.

ETSU came out strong in the third quarter despite Houston scoring 12 seconds in, pulling within five points with back-to-back layups from seniors Raven Dean (Charlotte, N.C.) and Sadasia Tipps (Hickory, N.C.). Houston then went on a 9-0 run over nearly three minutes to extend its lead at the media timeout, 57-43. The Bucs once again pulled within five with a 10-0 spurt of its own capped off by three-pointers from Dean and junior Taisha Murphy (Clayton, N.C.). The Cougars had the 63-58 lead heading to the final quarter — but ETSU had the crowd and the momentum on its side.

ETSU sent the home crowd into a frenzy as Dean nailed her second three-pointer of the day, followed up by a layup from Haynes-Overton off a pass from Upton — tying the game at 63 apiece. Houston would then pull back out to a 71-65 lead with 4:47 remaining and would continue to hold off the Bucs each time they began to push back. ETSU would pull within four on two separate occasions thanks to Spears, but the Cougars extended away from the 73-69 score to force ETSU into foul mode, sinking the free throws and holding off the surging Blue and Gold.

The Bucs conclude a three-game home stand on Tuesday, Dec. 4 as they host the Liberty Flames. Tipoff from Brooks Gym is set for 2 p.m. Tuesday night’s contest will be Faculty/Staff Night.