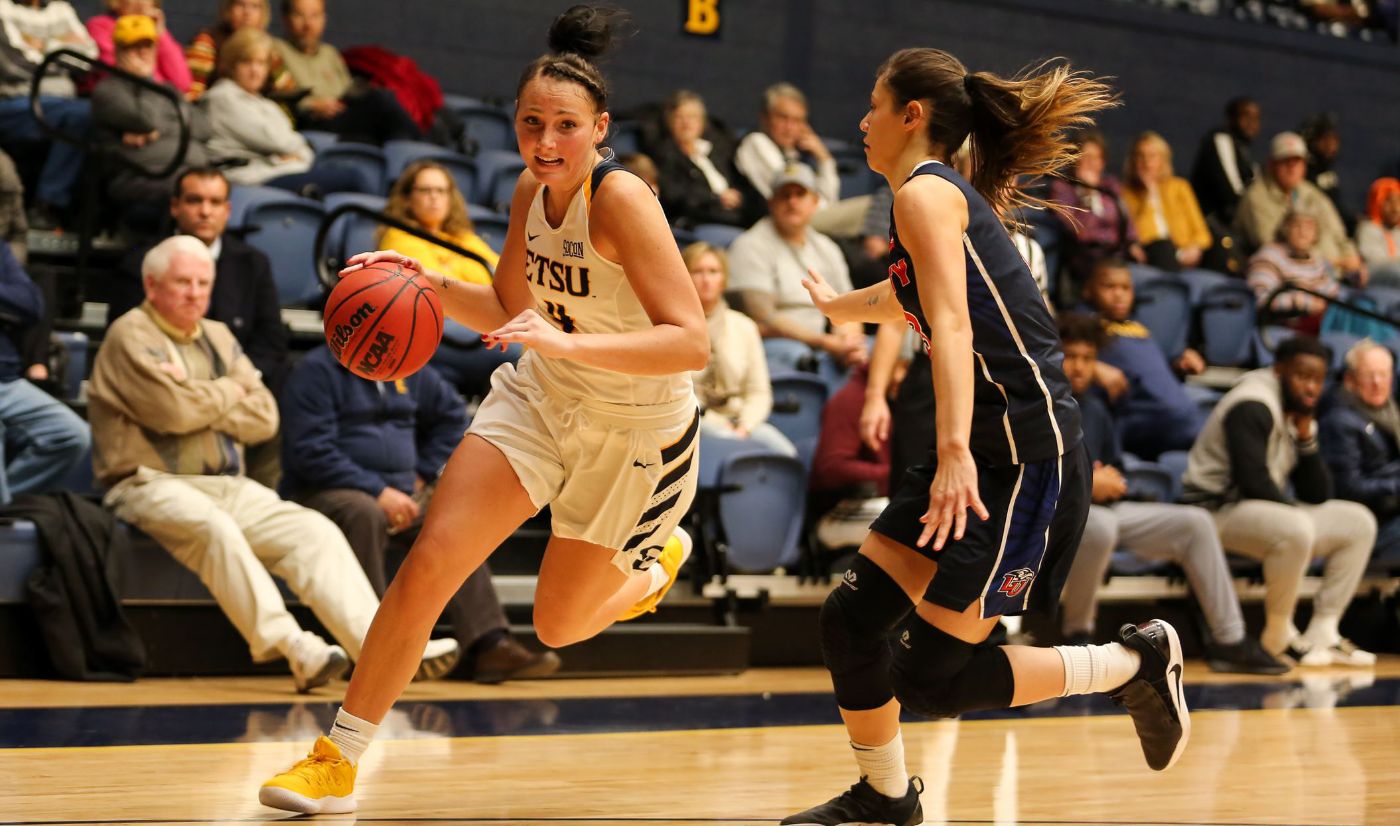 Britney Snowden started the game with a three-pointer. ETSU kept Liberty scoreless for the first two minutes of action, as the Bucs were able to go ahead 11-6, with four points coming from Kaia Upton. At the media timeout, ETSU held a 14-8 advantage before Liberty pulled within one going 4-4 from the field. The Flames were able to take their first lead of the game with a three. Sadasia Tipps (Hickory, N.C.) would end a three-minute scoring drought with a layup to regain the Bucs’ lead 19-18.

Spears gave the Bucs the first basket of the quarter, but the Flames would hit back-to-back threes to take a 24-21 lead. Redshirt junior Carley Lytton would come off the bench to tie the game with a three of her own. A 10-0 run by Liberty would put them up 34-24, as ETSU was scoreless for three minutes. Spears and Dean would keep the Bucs in the game, until Taisha Murphy (Clayton, N.C.) had the hot hands from behind the arc to swish back-to-back threes to pull within seven, 44-37. Upton helped ETSU score their last points of the half with an and-one, but Liberty would lead at the half 49-40.

Erica Haynes-Overton scored her first points of the game with just under a minute into the third quarter. Lytton sparked the momentum for the Bucs after hitting back-to-back threes to put the Bucs within five, 55-50. A 6-0 run by the Flames would extend their lead to 61-50, but the Bucs continued to battle. Lytton’s fourth three of the game and back-to-back layups by Upton put the score at 68-59. The Bucs had just one turnover in the third quarter, but would continue to trail, 76-62.

Lytton started the final minutes of play with a bang, draining her fifth three of the game to put ETSU within ten. Points went back and forth before both teams were scoreless for two minutes. Haynes-Overton did what she does best, grabbing a steal and then driving down the court for a layup to get ETSU within eight, 88-80. Liberty had three turnovers in a minute and suffered a four-minute scoring drought. Four straight points by Haynes-Overton put ETSU at 88-84, as the Bucs would conclude an 8-0 run. The Flames called timeout to advance the ball down the court, but faced an unlikely situation with six players on the court, resulting in a team technical. Head coach Brittney Ezell would send Lytton to the free throw line and she made both to get the Bucs within two. ETSU would foul Liberty on their final possession and they would only make one free throw to keep it a three-point game. With the clock winding down, Haynes-Overton attempted a three, but Liberty came away with the 89-86 win.

ETSU will travel over the mountain to take on UNC Asheville on Sunday, Dec. 9 at 2:00 p.m.