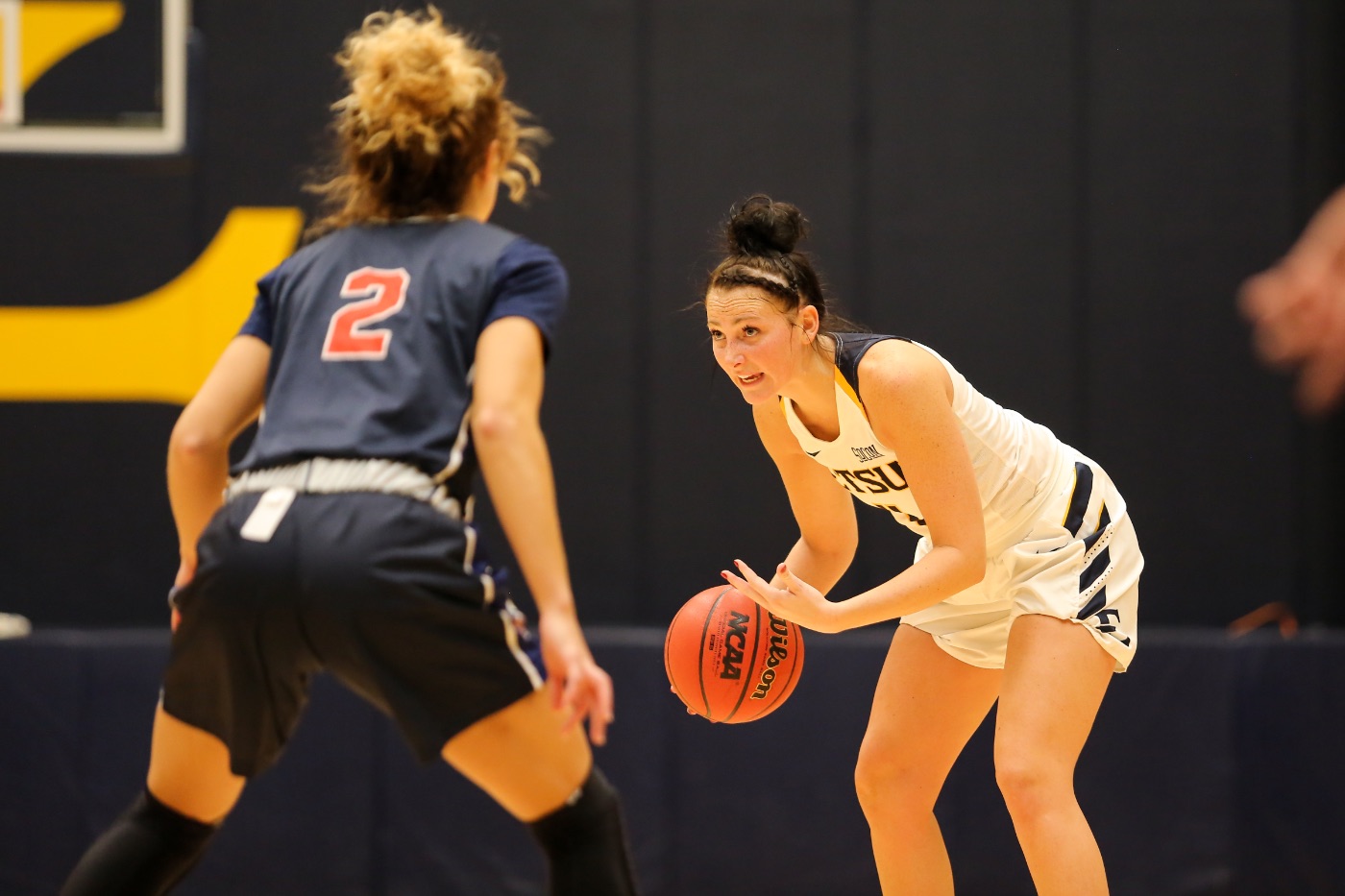 Second half surge for ETSU comes up short on final possession

After falling behind 27-14 at the half, ETSU’s lowest-scoring start this season, the Bucs responded in the second half by outscoring UNC Asheville 41-29. In a fourth quarter that saw eight lead changes, the Blue and Gold would have a couple of opportunities to steal the road win with the shot clock off trailing by one point. Both chances failed, as the Bulldogs held off the surging Bucs for their fifth win of the year.

“I thought they responded well in the second half,” said ETSU head coach Brittney Ezell. “We’re not very comfortable right now. Until (our team) decides they want to be coached in both halves, we’re not going to be very good…it’s very frustrating. I know they’re frustrated.”

The Buccaneer offense sputtered early on playing without many of their scoring threats, failing to find points on 15 of their first 17 possessions. UNC Asheville ended the quarter on a 13-1 run, limiting the Bucs from the field for nearly seven minutes. After UNCA scored the first four points of the game, redshirt-junior guard Carley Lytton (Floyd, Va.), making her first start since the 2015-16 year, got ETSU on the board with a corner three for her team-best 11th triple of the season. Senior forward Sadasia Tipps (Hickory, N.C.), averaging a team-high 5.1 rebounds per game entering the contest, used one of her two boards before the first media timeout to get ETSU’s second field goal of the night and was fouled in the process. UNC Asheville’s top-scoring sub, Nadiria Evans, sparked the Bulldog run with nine first quarter points.

Facing a 19-6 deficit entering second stanza, the Bucs would see freshman point guard Kaia Upton (Nashville, Tenn.) tally her first bucket on ETSU’s opening possession, cutting the Bulldog lead to 11. Both defenses rose to the occasion after that score, as UNC Asheville and their trademark defense would continue to make life difficult on Brittney Ezell’s squad by holding the Bucs scoreless the next seven minutes. ETSU’s defense was proving stout as well, stymying the Bulldogs for nearly six minutes entering the final stages of the first half. Erica Haynes-Overton (Nashville, Tenn.) would break the Bucs’ scoreless drought with her first hoop of the evening, floating one in from five feet out after an offensive rebound. Tipps would log her second score on the Bucs next possession, while Haynes-Overton, battling a fractured nose, would get a second score in rapid succession to close Bucs offensive book going to the locker room.

ETSU began chipping into the lead coming out of the locker room, finding the momentum to pull within two possessions at the third quarter buzzer. The Bucs ended the quarter on a 13-2 run over about three minutes to steal momentum. After seeing only six minutes in a low-scoring first half, senior forward Britney Snowden (Pensacola, Fla.) jump-started the Bucs out of the game with an assist to Tipps and a three-point basket as the shot clock expired. Despite the early burst from Snowden, UNC Asheville would go on a 9-2 run heading into the under-five timeout. The break from play proved to be a turning point for ETSU, as Tipps hit a couple of layups to become the first Bucs in double figures scoring-wise. Haynes-Overton also sparked the late run with a three-pointer and a steal-and-score during the run.

The second half efforts came to fruition in the fourth quarter for the Bucs, as ETSU saw its first lead of the game at 44-42 with 7:49 remaining in the contest after E’Lease Stafford (Lawrence, Kan.) made the go-ahead jumper. In the midst of a 25-6 run, momentum was wearing Blue and Gold. UNC Asheville did everything it could to keep pace as the fourth quarter saw eight lead changes, including four in the final 2:01. All the excitement culminated when the shot clock was erased, as ETSU trailed by one, 56-55, with 23.1 seconds to go. On that possession, Haynes-Overton would be whistled for an offensive foul, her fifth, disqualifying the superstar sophomore. The Bulldogs would make a mistake immediately after that on the inbound, stepping over the line to give ETSU the ball back with exactly five seconds to go. UNC Asheville forced a turnover before the final shot in the paint, sealing the win.

The Bucs will have a quick two-day turnaround as they host North Carolina A&T inside Brooks Gym Thursday night, Dec. 13 at 7 p.m. Thursday’s promotion is Holiday Hoops Night, as fans are encouraged to wear their festive holiday attire for the final game before the holiday season.